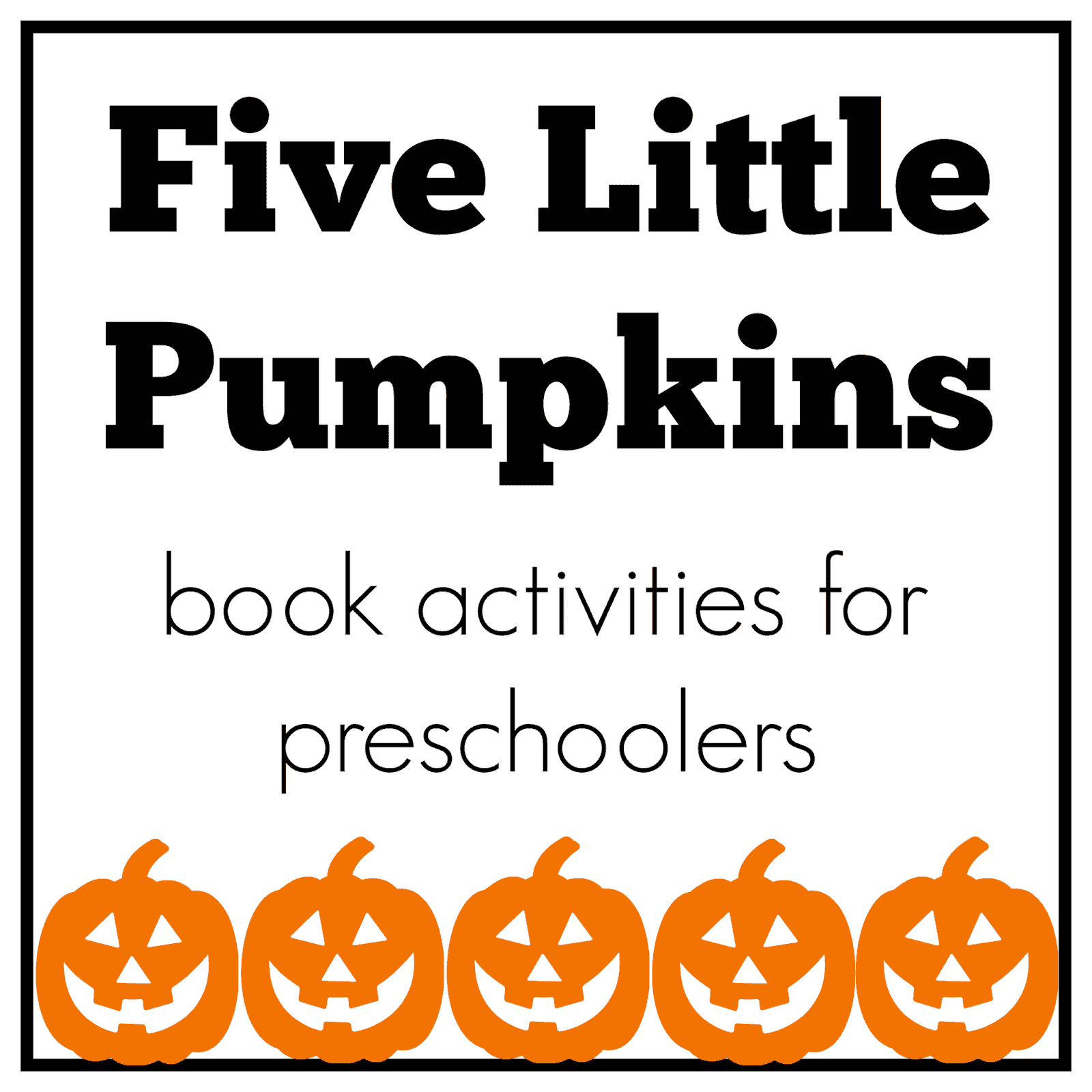 Today was our first attempt at our Mommy and Me Book Club and it was a smashing success! I was inspired by this wonderful blog and have been anxiously awaiting our first day for a few weeks. There is a lot of great info here if you want to start your own book club. We plan to meet once a month because meeting weekly is just too much commitment for me right now. 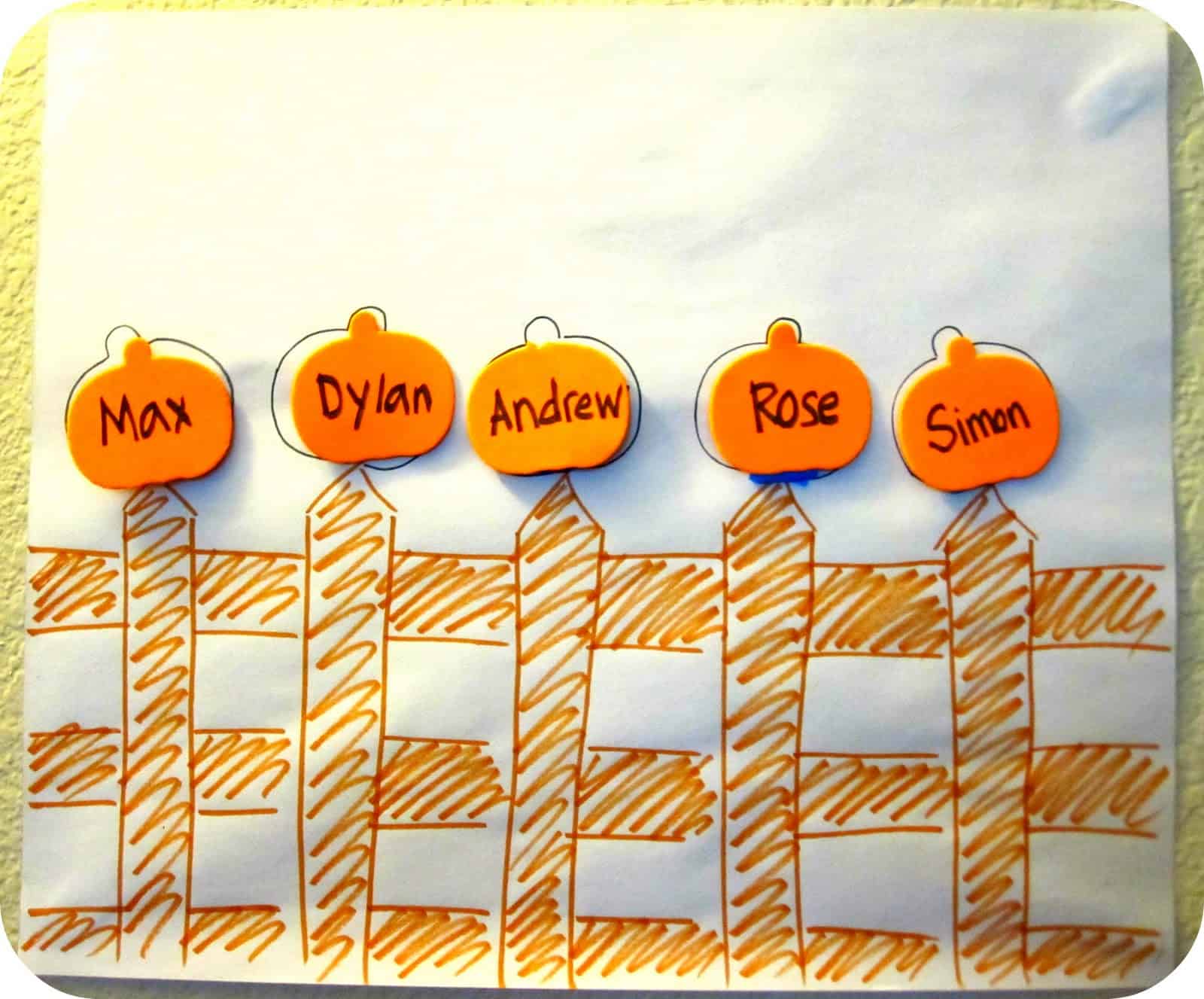 We started off the morning with a few Gathering Activities as everyone arrived.

1. Pumpkin puzzles- Each child was given a ziploc bag with six puzzle pieces inside. They sat down on the carpet and got started putting their puzzles together with their moms. 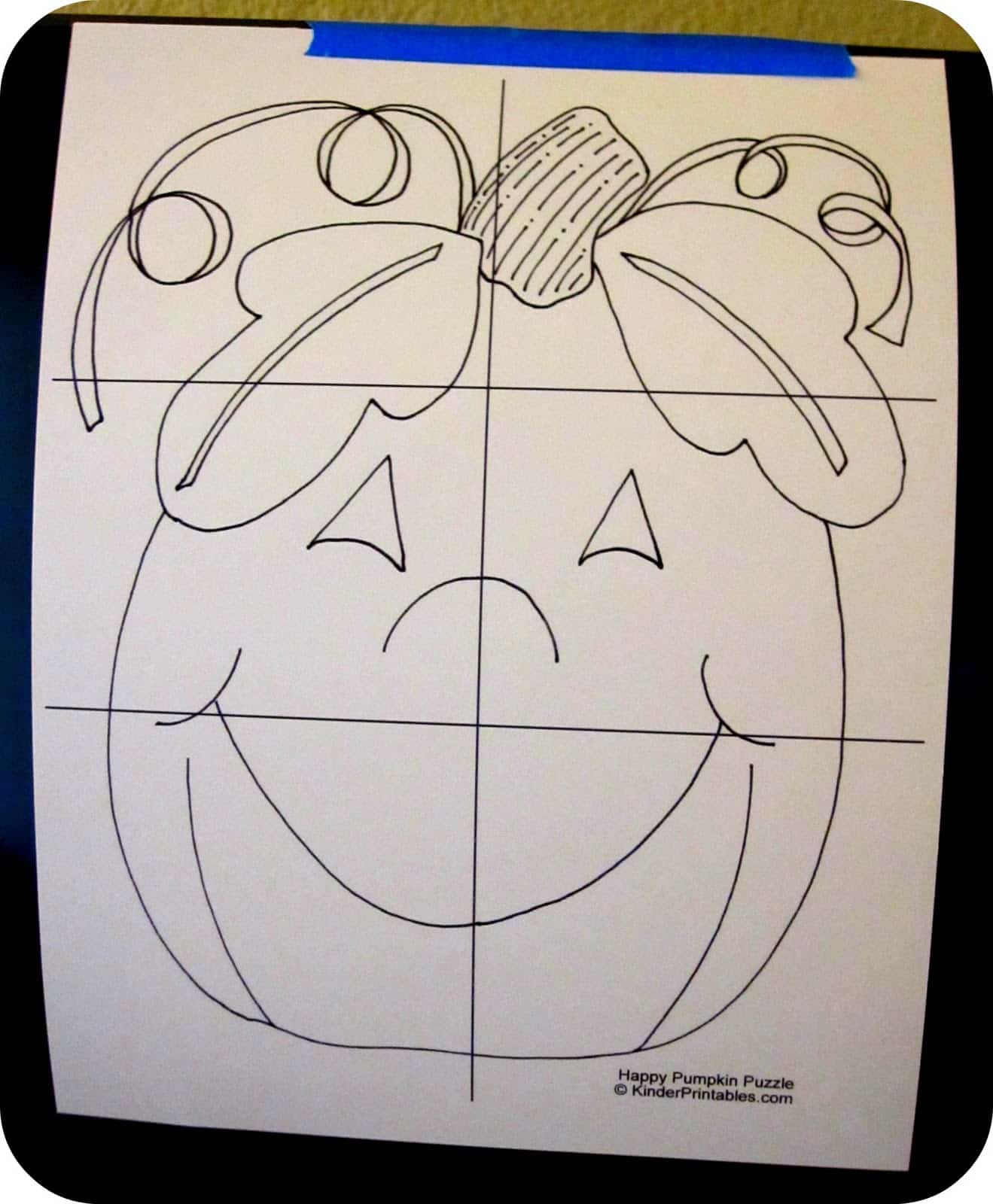 2. Pumpkin Name Hunt- As they finished their puzzles they were encouraged to come and find their name pumpkin on this little fence illustration. I let them know that there was a matching orange pumpkin hidden somewhere around the room that they needed to find. The kids hunted around the room to find the pumpkin with their name on it. 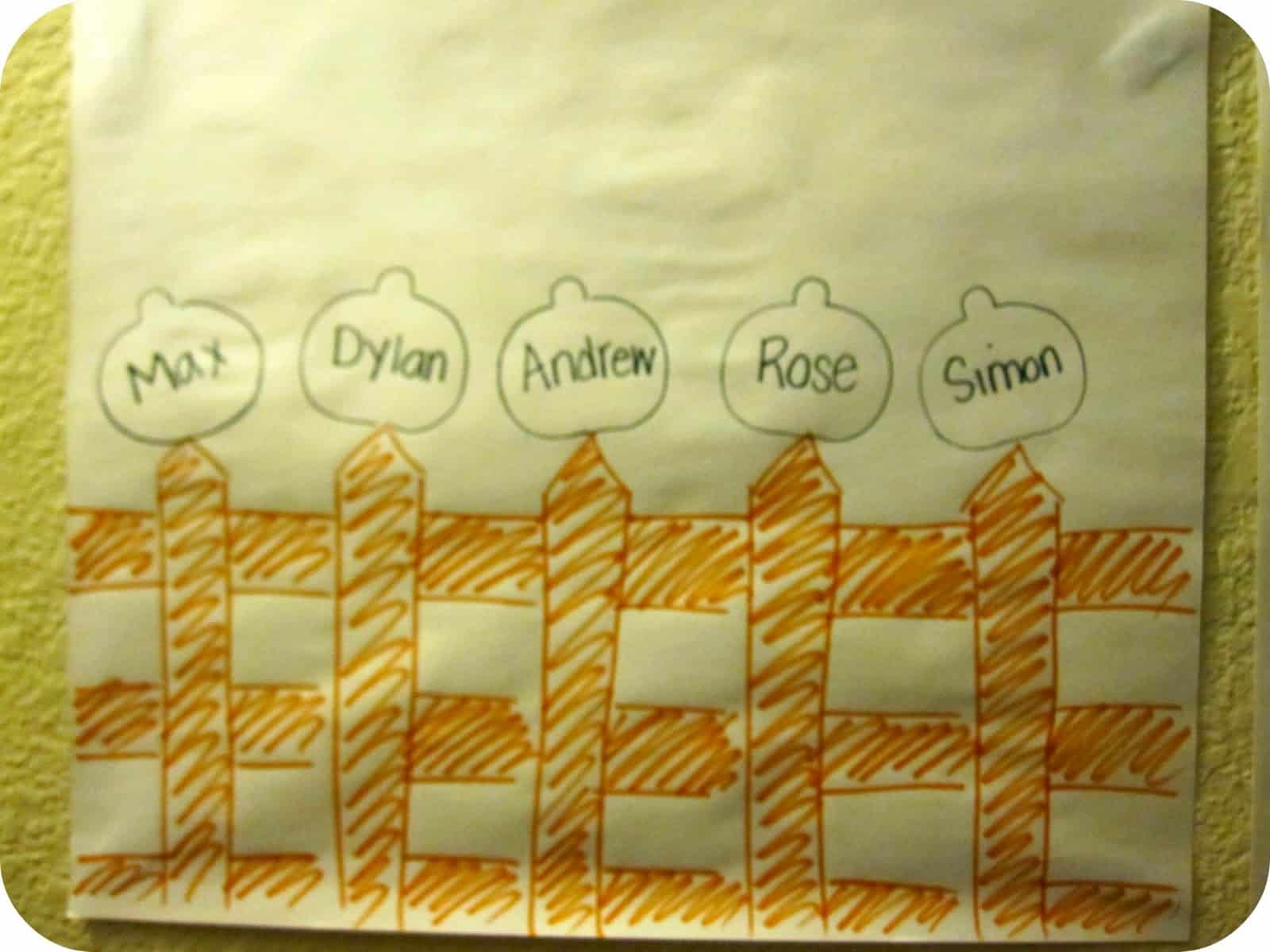 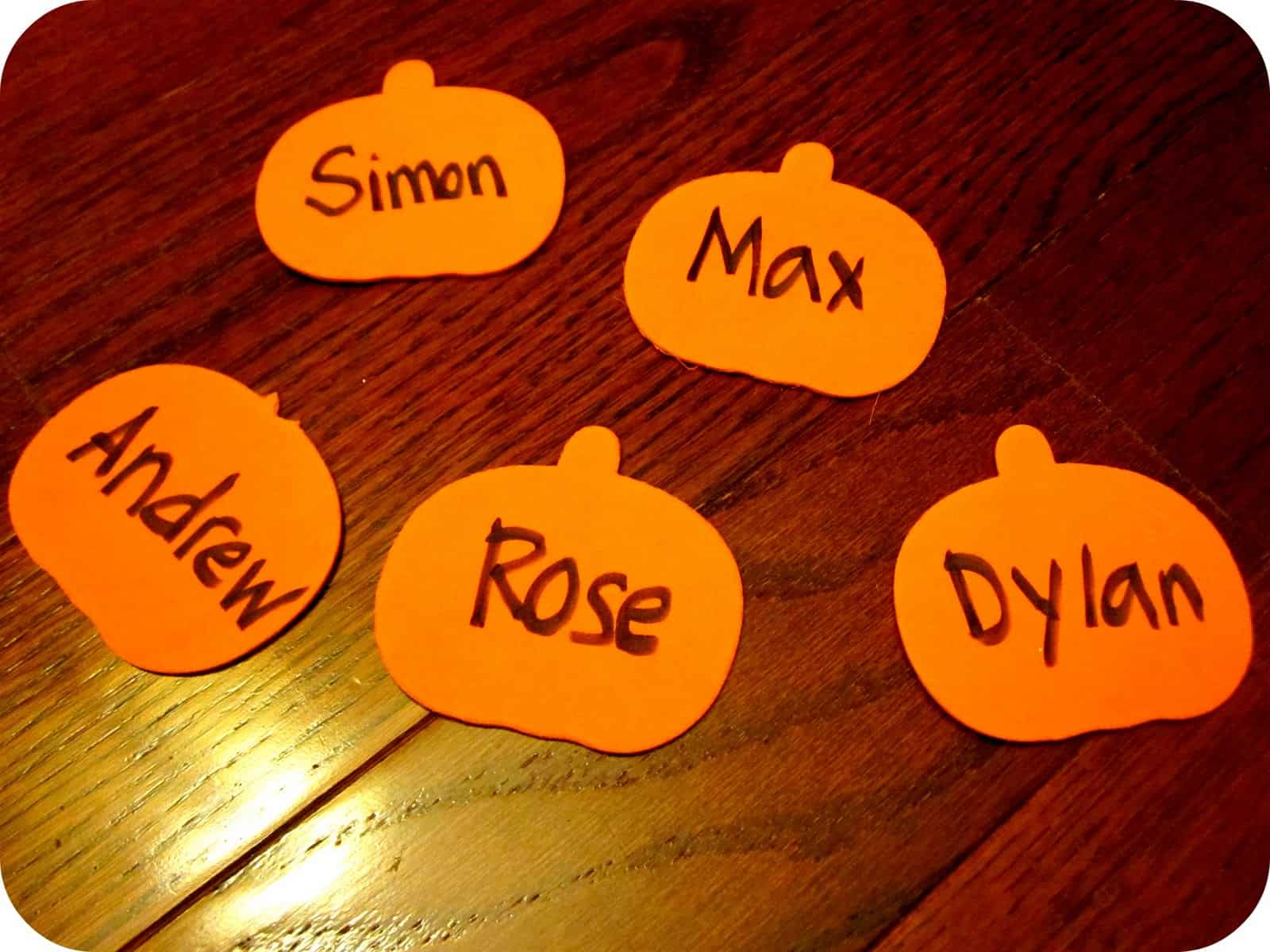 Once they found their pumpkin, they came up and stuck it to the fence with a little tape.

3. Halloween Stories- I had a plethora of books available if not everyone had arrived yet or kids were still hunting for their name pumpkins, but everyone ended up finishing around the same time, so we moved into our Circle time portion of book club. 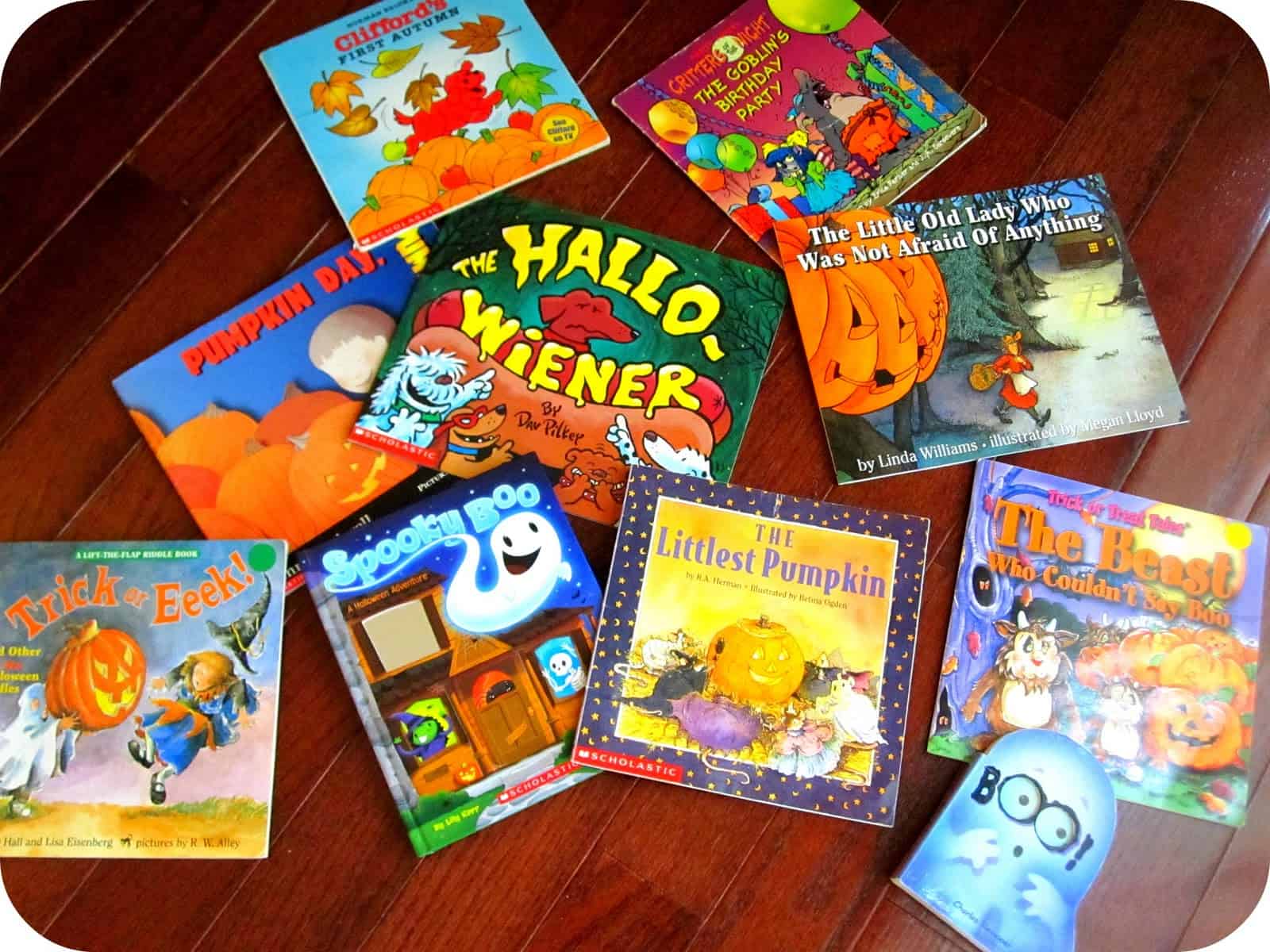 As we transitioned to Circle time, I laid out orange placements (we called them their "pumpkin mats"). Each child chose a spot and the moms sat next to them or behind them. 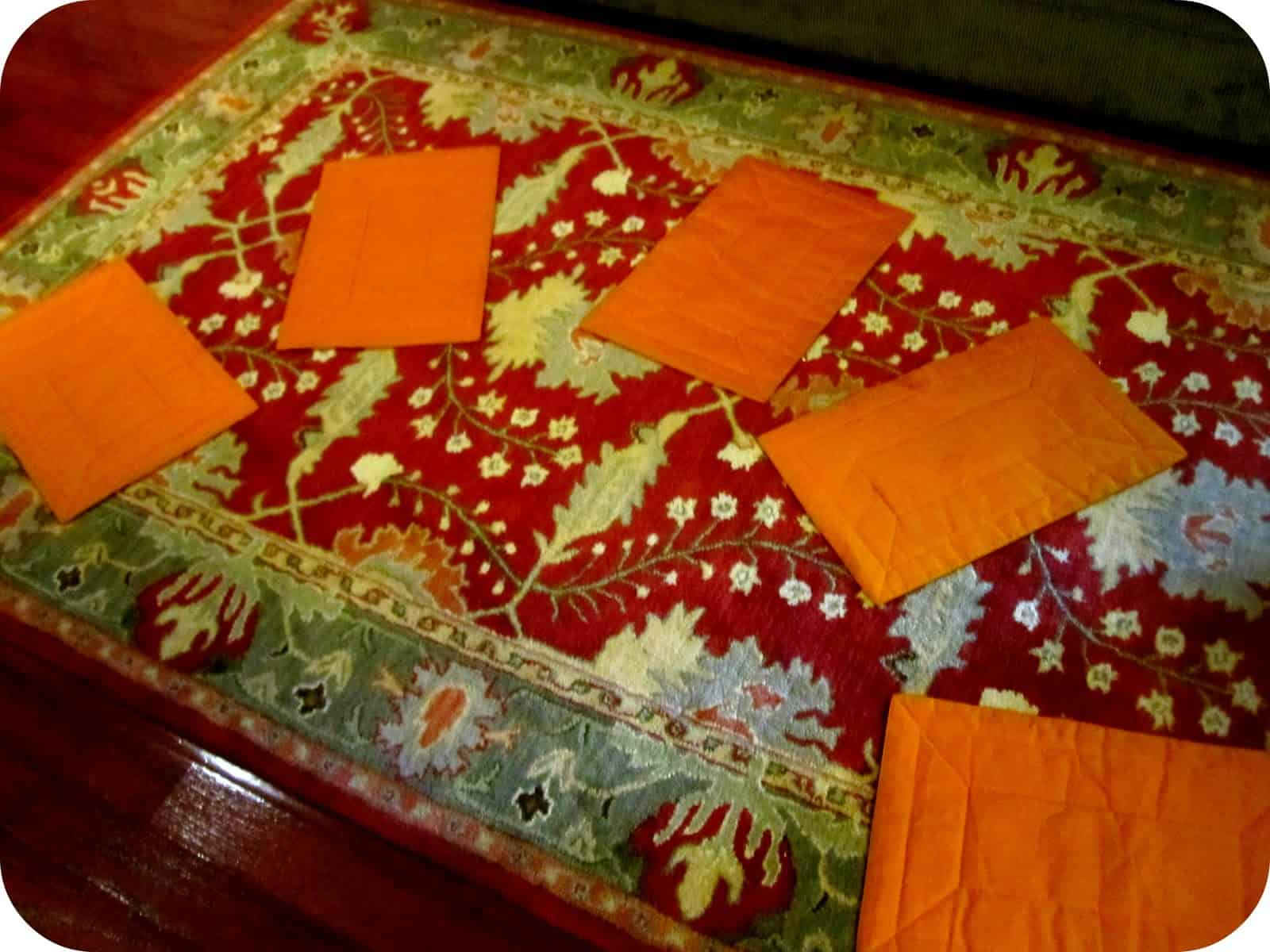 I briefly mentioned the schedule posted behind me (which was mostly for me... and my little guy who really likes to know what is coming next). 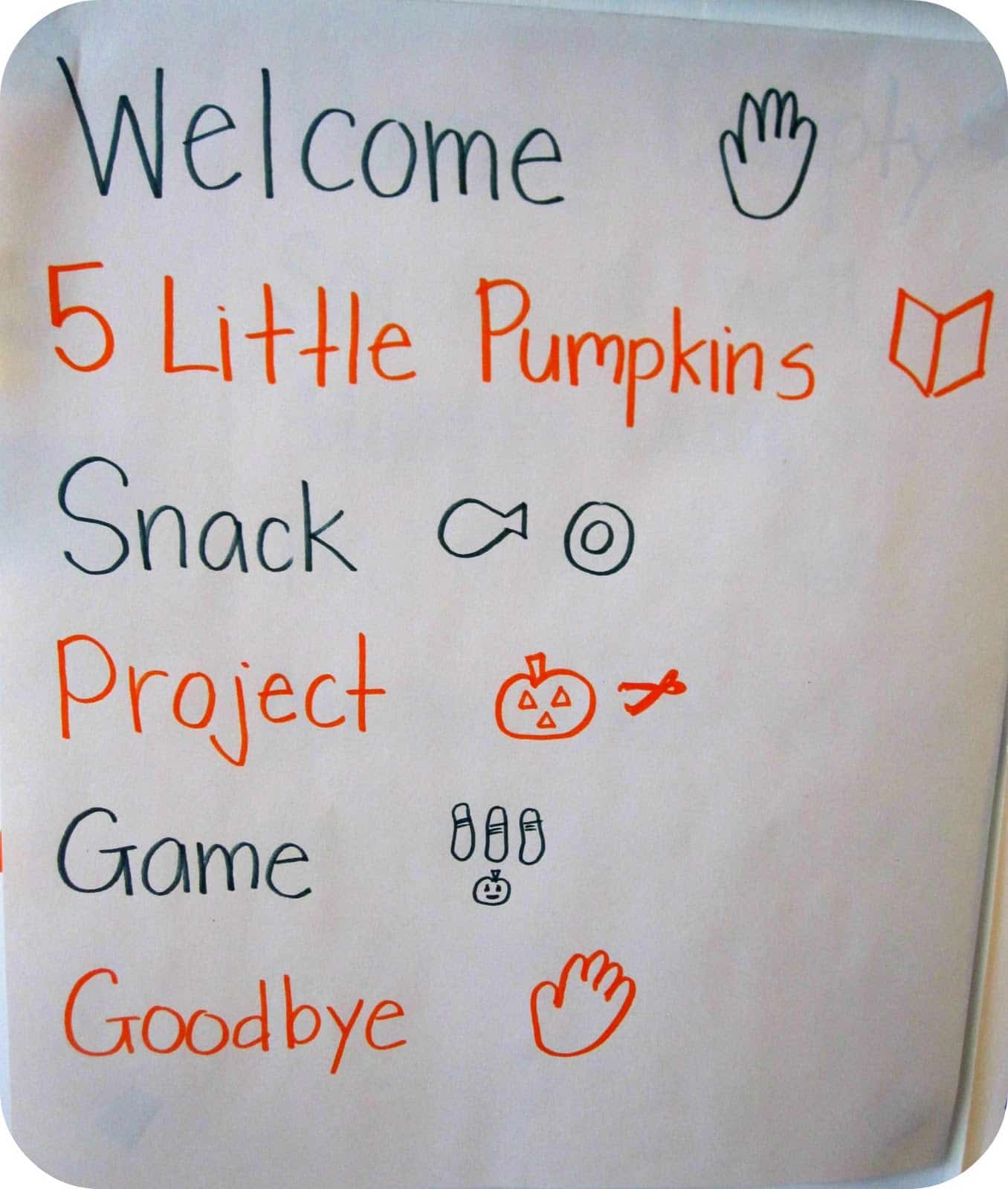 We sang a Welcome song called "Hello Song" (substituting "fun learning day" for "primary day") and then we began a Read Aloud of our book of the month, The Five Little Pumpkins by Dan Yaccarino. It is a short fun book that goes along with the popular "Five Little Pumpkins" poem and song.

After the Read aloud, I taught the kids the Five Little Pumpkins fingerplay/poem (my version was a little different than the link above) and we practiced it and few times.

Next came Snack time. Before kids left the circle I demonstrated how they could use these Pumpkin Mats to count their snacks (you can download them here). We gave them each child a coffee filter filled with snacks and they counted and explored while they ate. 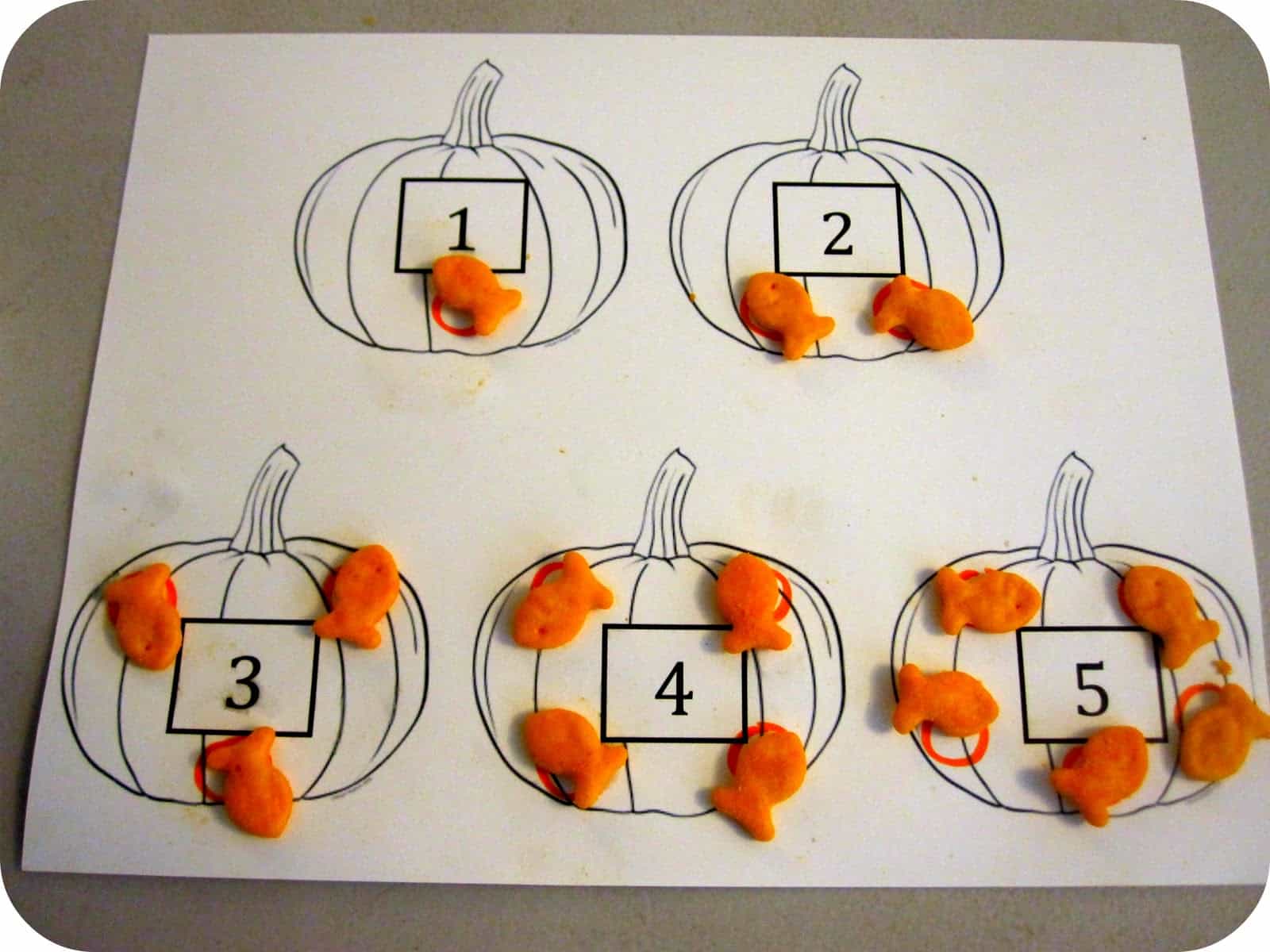 After snack, we moved into a little pumpkin craft. You can find the instructions here (great idea from 1plus1plus1equals1.com). 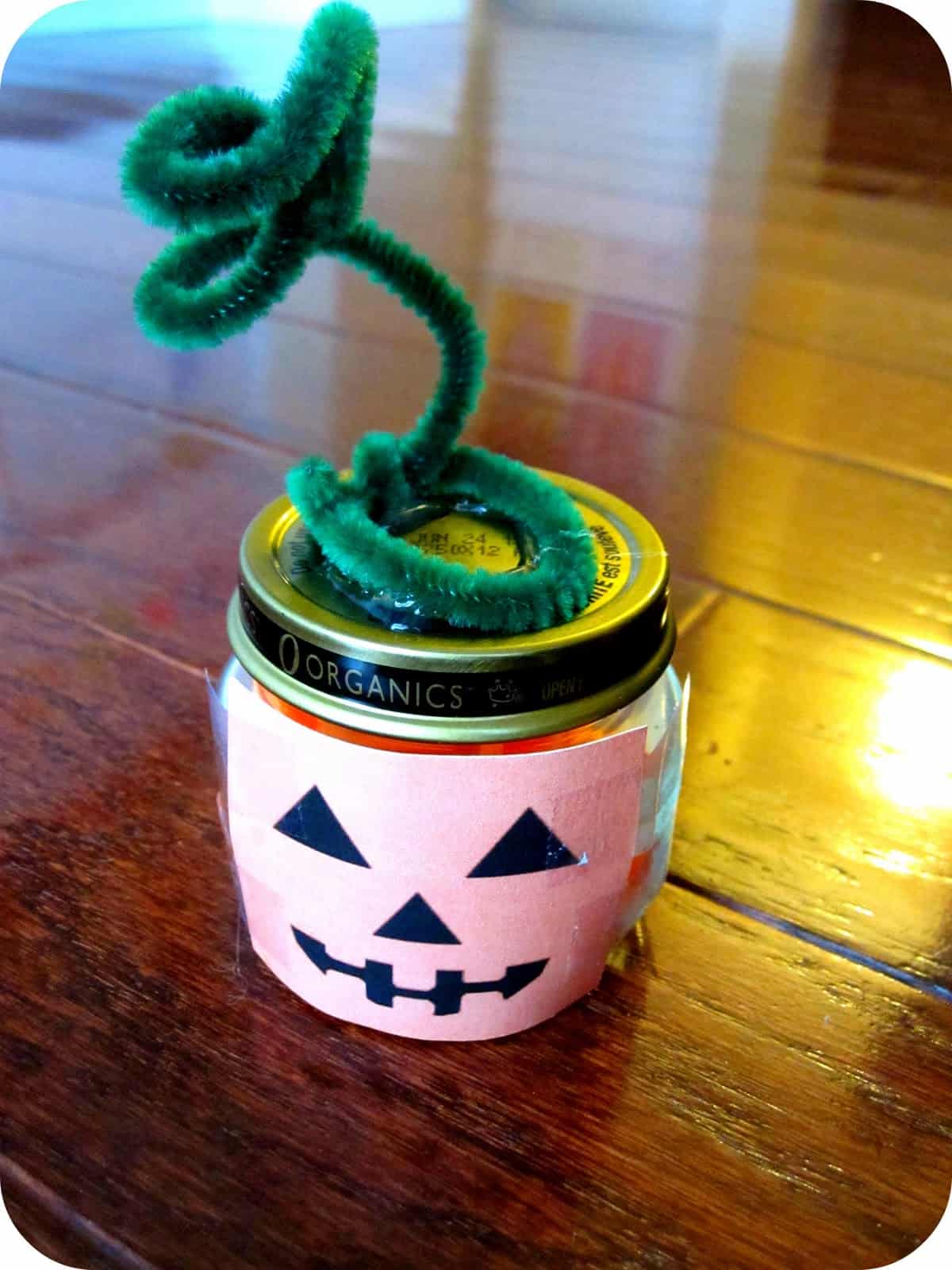 Instead of having the kids glue lots of jack-o-lantern pieces on... I had precut jack-o-lantern faces for them to just tape into their jars. The highlight of the craft really was just the process of cutting orange paper and stick it inside the jars. Everyone loved that. The younger kids ripped paper if they weren't great at using scissors. The moms then glued the pipe cleaners on the top with a hot glue gun. 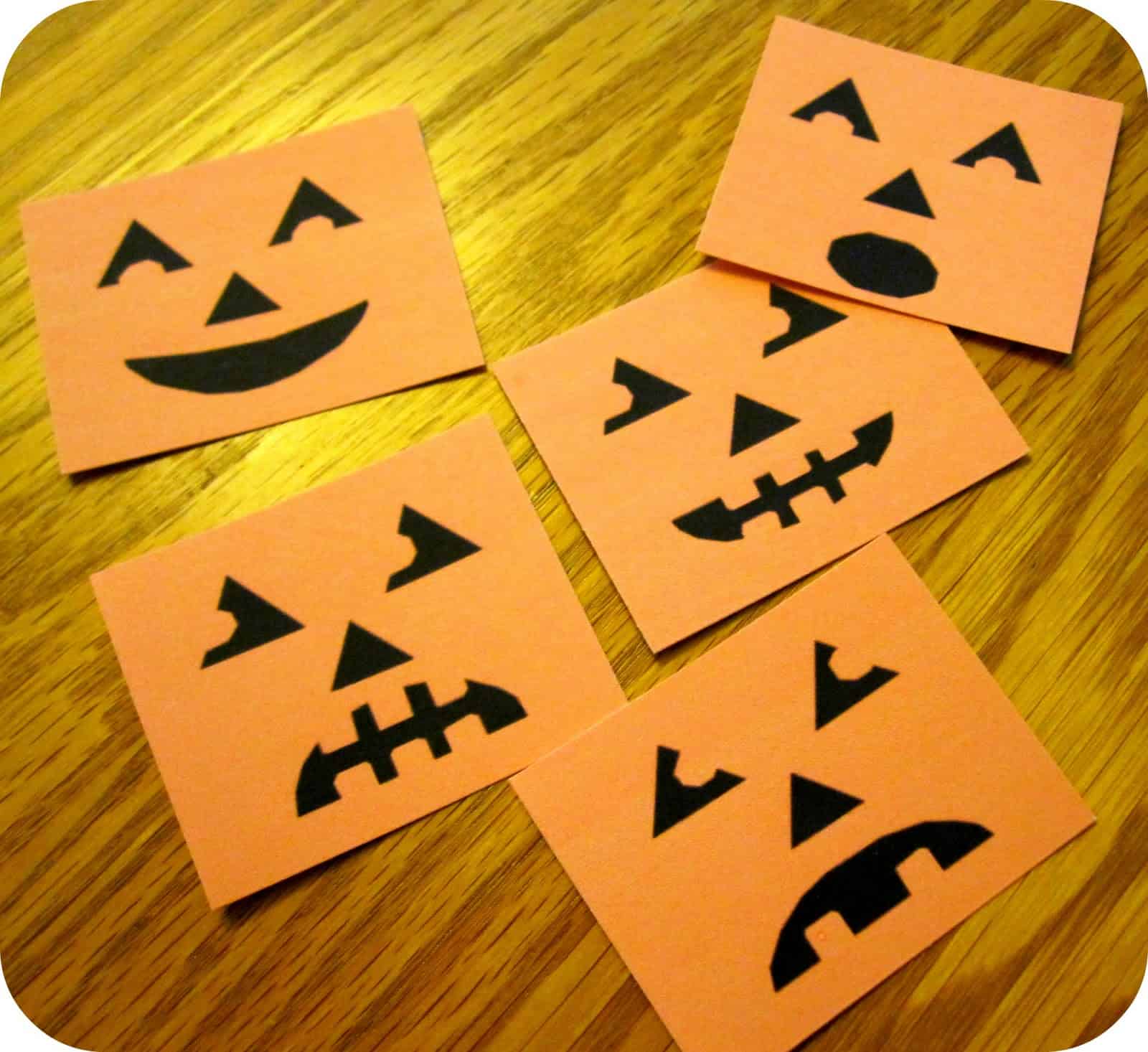 We ended the morning with some Activities... First we played Don't Eat Jack (which was a hit because everyone loved eating M and Ms) and then we did some "Pumpkin Fence Bowling."

I used some cleaned out formula bottles and drew Jack-o-Lantern faces on them. I didn't have time to throw some orange paint inside... so they were white jack o lanterns. 🙂 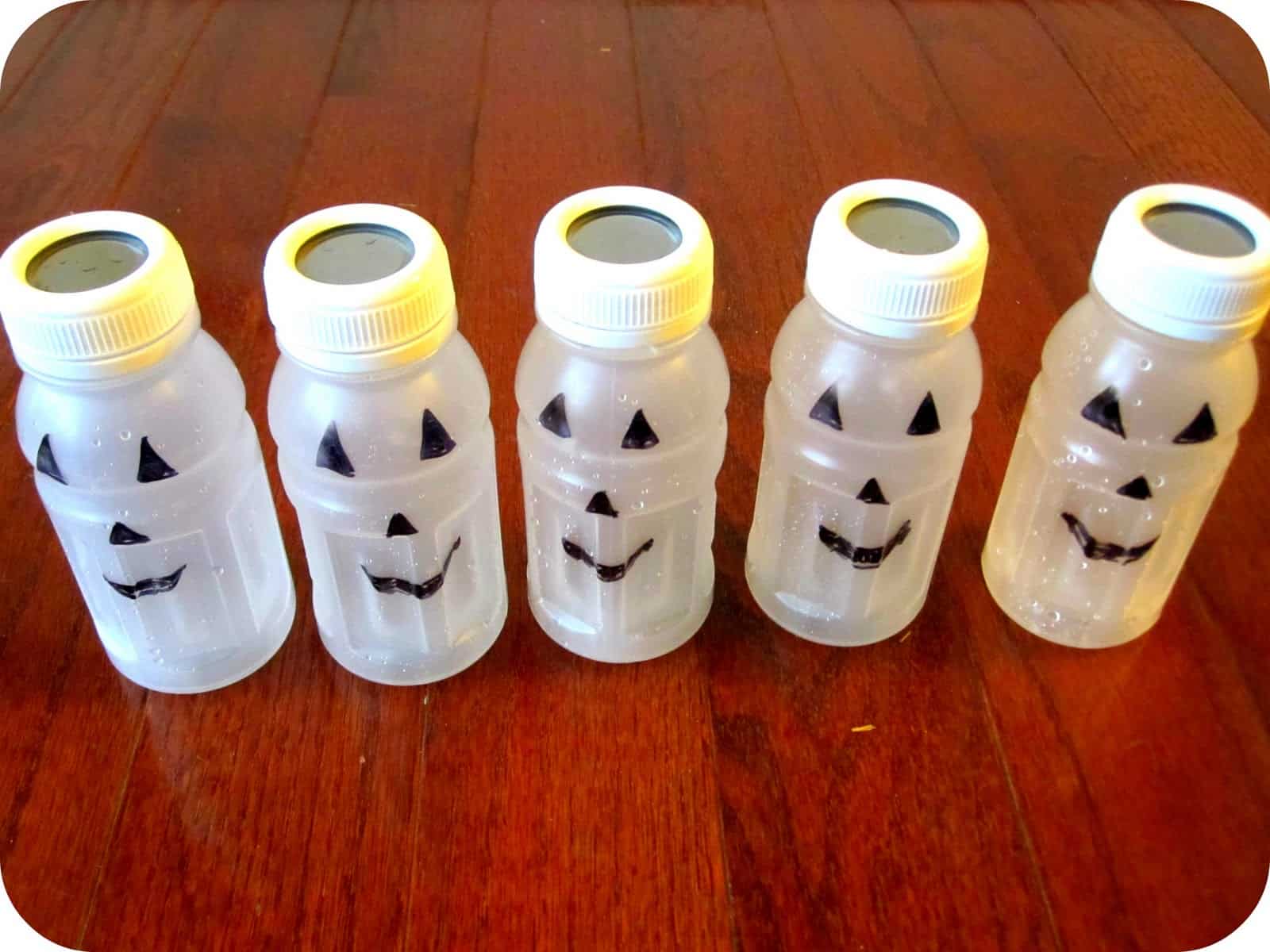 The kids worked together to build a big fence out of my large Melissa and Doug blocks. Then they put the five bottles on top and took turns using several plastic pumpkins to "bowl" (as my son called it) or throw the pumpkins at the bottles and knock them down. 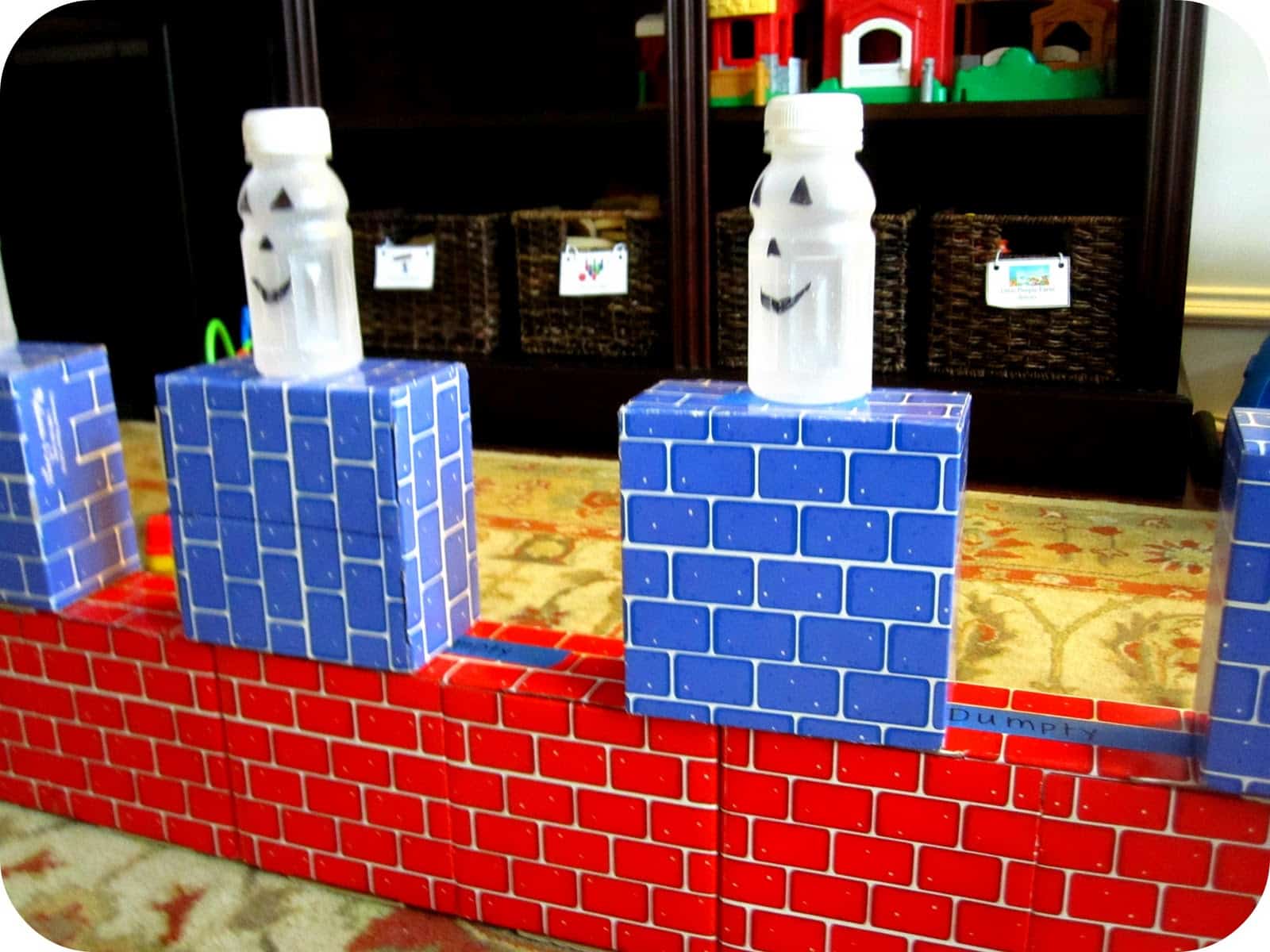 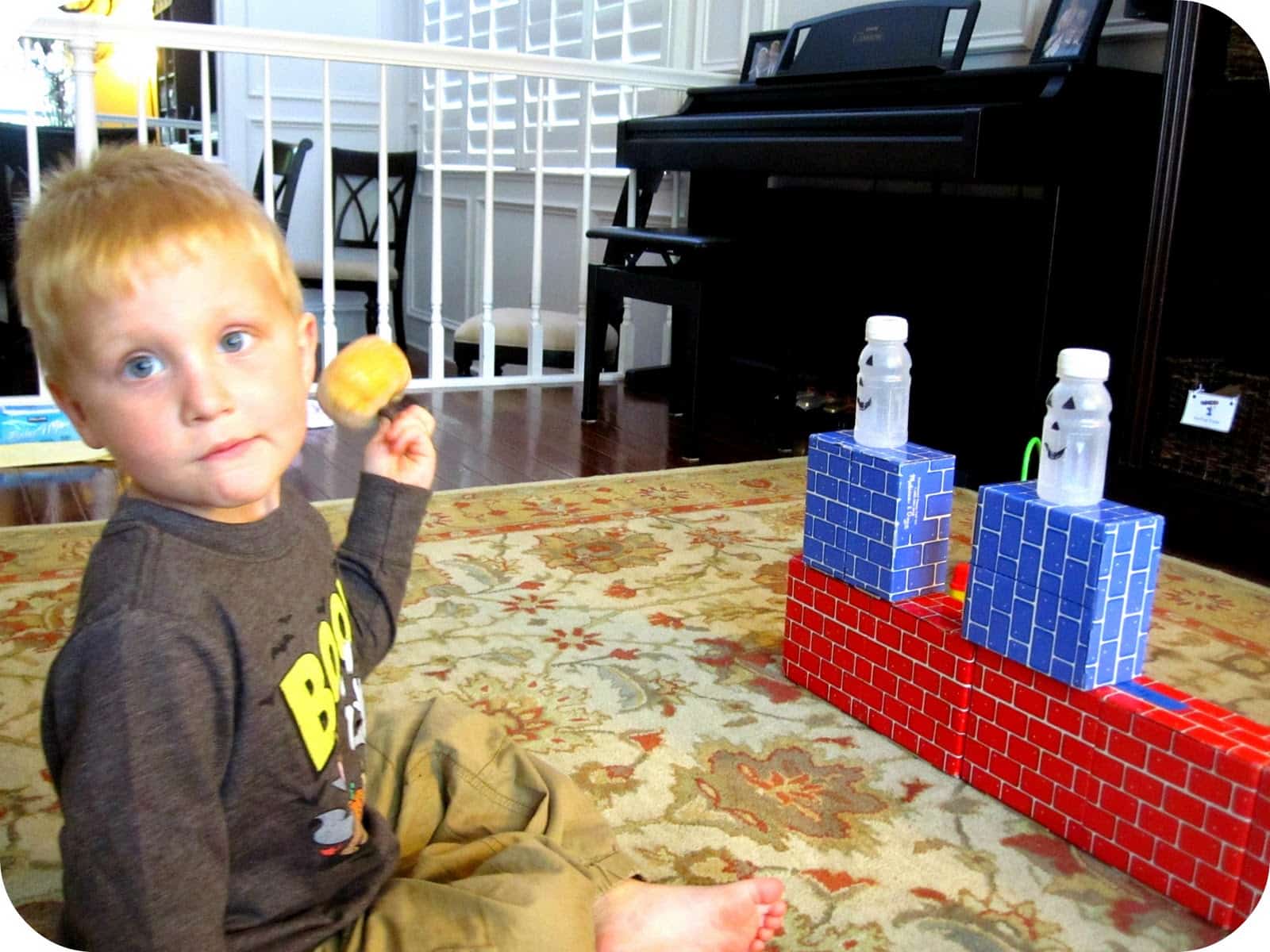 We finished off the morning with a Closing/Goodbye song back in the family room on our pumpkin mats... and then we let the kids go have some playtime while the moms got to chat for a bit.

As a Take Home activity, I put one of these Five Little Pumpkin Emergent Readers books together for each child. I left it blank so the kids could read it at home and color it. 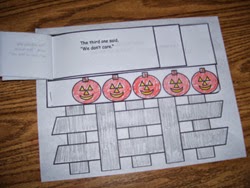 During Book club time we also had a little Positive reinforcement system in place to help encourage the kids to demonstrate behaviors such as :

- staying on their pumpkin mats during read aloud

- keeping their hands/feet to themselves

As I observed the children demonstrating the behaviors above, I would drop some candy corn into a bowl and try to comment on the positive behavior that I observed. I mentioned that if they filled the bowl with candy corn, then we'd be able to do several fun games at the end of our time together. This served as a great way to encourage positive behaviors and ignore any inappropriate behaviors... which is something my little guy needs when I am leading a group. He tends to act out with inappropriate behaviors when I am leading a group because he can easily get attention from me for it. 🙂

I am excited for our next get together in November! Instead of having different moms lead different activities each week, we decided to have one mom be the leader each time we meet. They are in charge of everything that day and then the other moms come, support, and help out as needed.

Our time together lasted about an hour and a half, though the formal book club time was closer to one hour. I decided to keep things brief during our first time together so that the kids would have fun and be successful. We sang two songs, read one book, did one fingerplay, did one craft, and did two brief activities. Five kids was the perfect size for today with three kids being about 3.5 yrs old and two children that were a little younger.

I found so many other fun activities and crafts that went along with The Five Little Pumpkins... so check out my Pinterest page if you need some more inspiration.

What other Halloween books do you love to read with your kids/students in October?