Our afternoon went by really slowly today. We usually go out for a run and to the park... but it was in the mid 90s (Hello? Where is my Northern California Fall weather?!!) so I didn't want to take the baby out. I was feeling under the weather and stir crazy... but instead of getting annoyed, I whipped out the kid scissors! 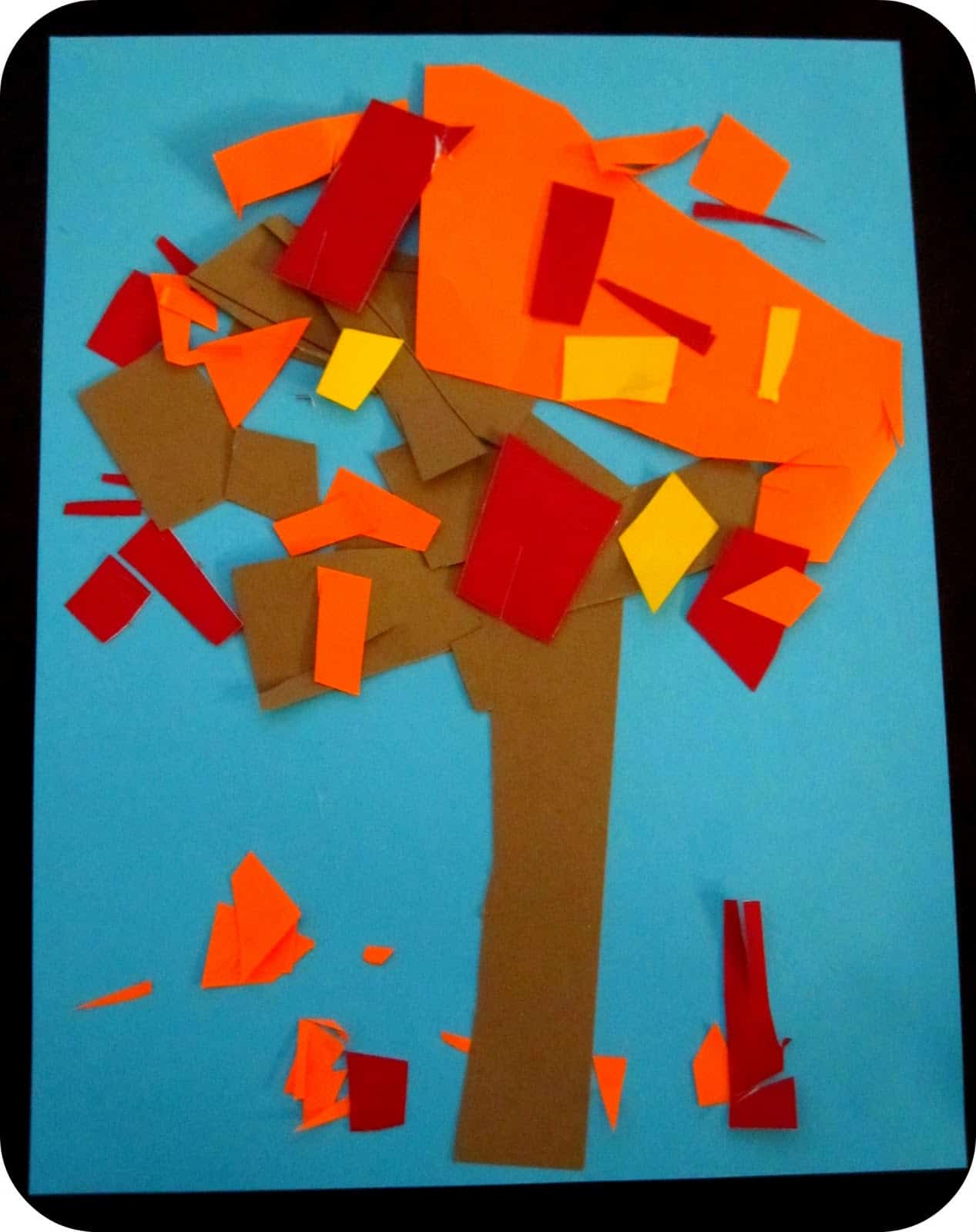 I asked him to tell me some warm colors that we see on the trees during Fall. He said orange and red... and I added yellow... and so I passed off the paper and let him start snippin.

I loved his intense cutting face 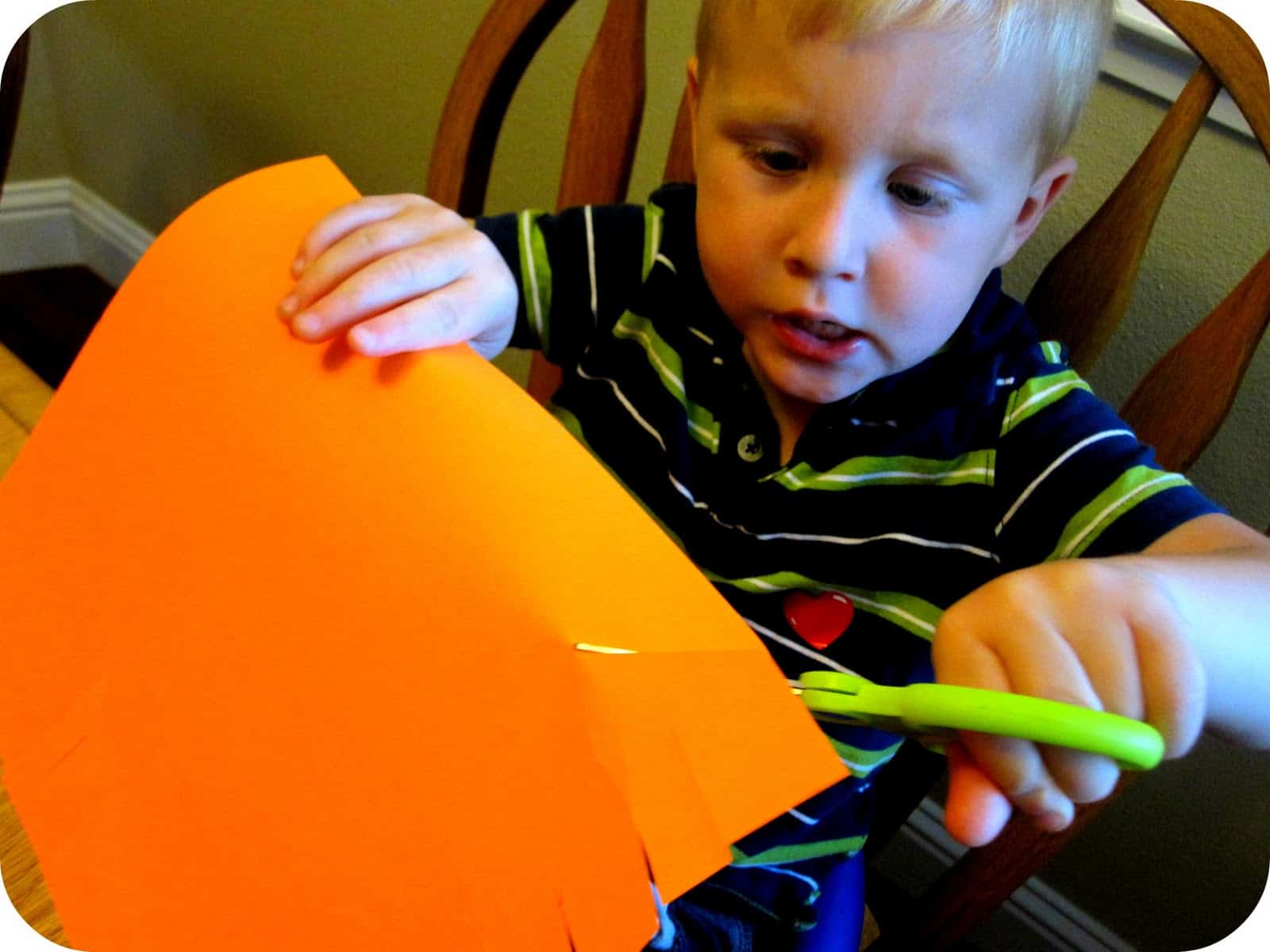 I tried not to give too much guidance for the "leaves." I really have to restrain myself from saying things like, "oh, don't you think you should cut the paper a little smaller?... leaves aren't really that big"... so I kept my mouth SHUT and he was SO EXCITED about every leaf... even the pieces of paper that were so small that when he wanted me to find them on the floor I barely could because they were practically invisible.

My plan was for him to make a Fall tree. Originally I was going to have him just cut leaves and I was going to cut the tree out (see ugly tree below). 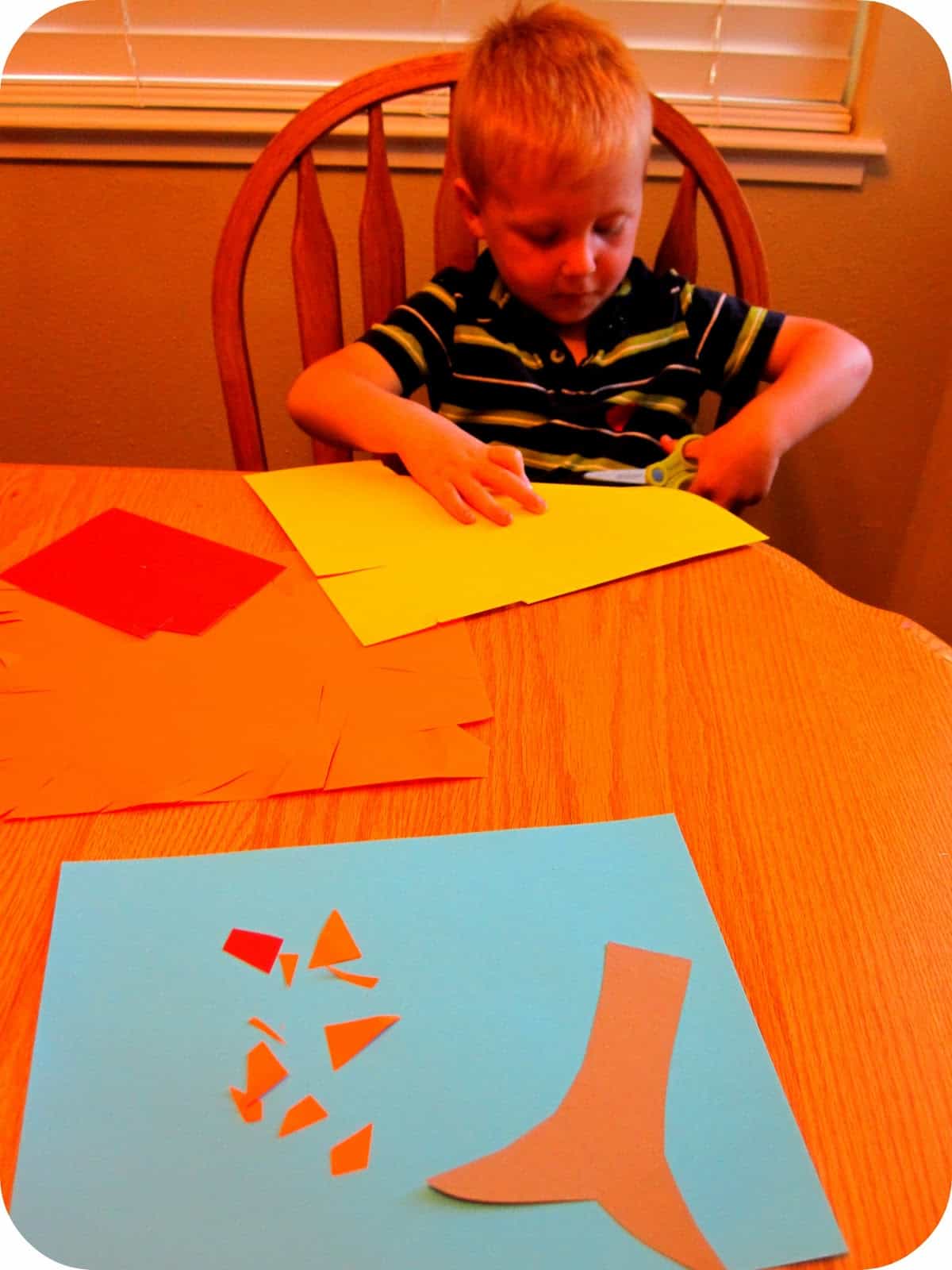 Then, as I watched him cut and cut... I thought, I should draw some lines for him to see how well he does at cutting out his own tree trunks and branches.

Check out all of these awesome "leaves" 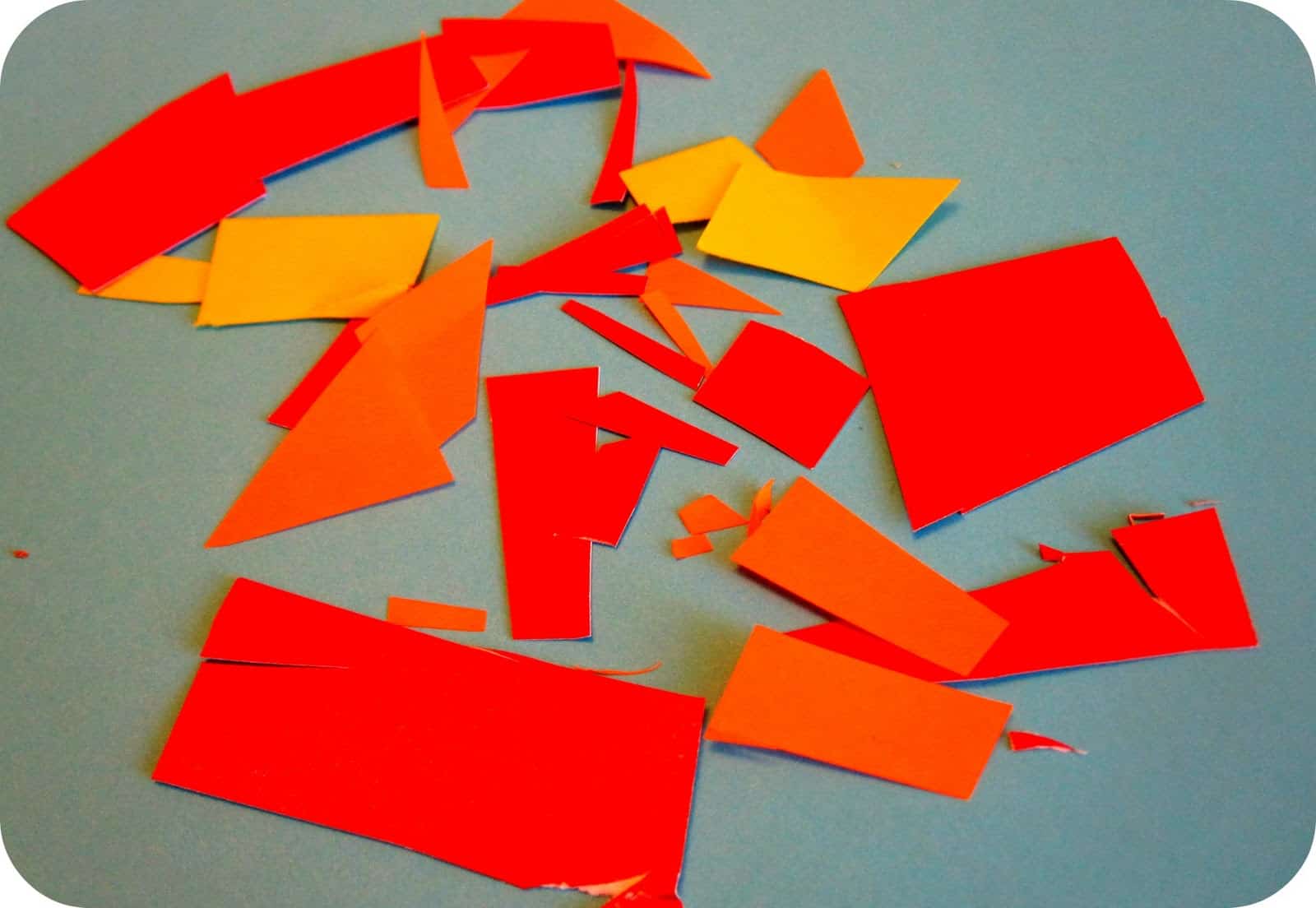 He cut straight lines remarkably well and then cut the trunks and branches in half and kept snippin and I just held my tongue and let him be the artist. It was fabulous. 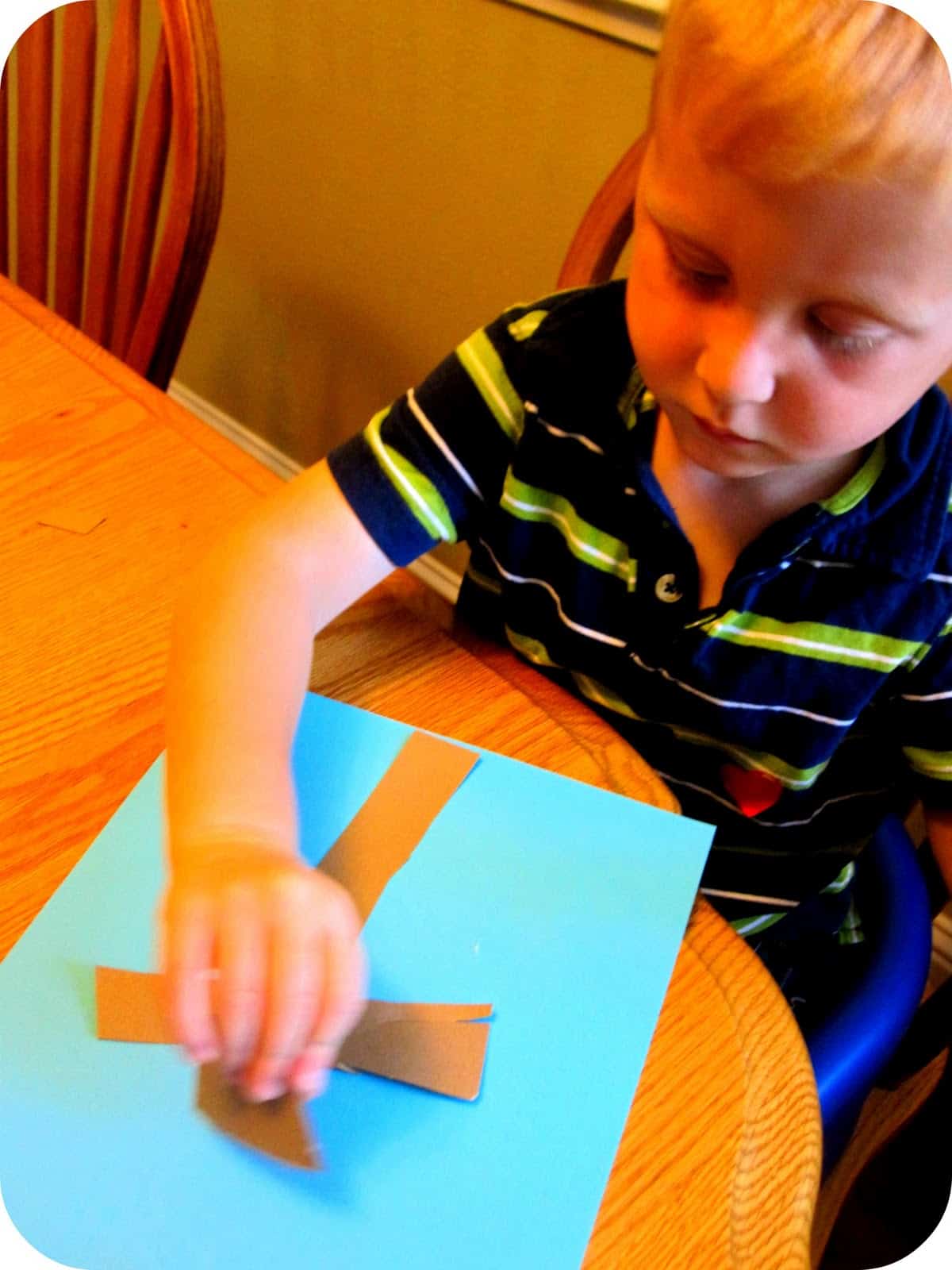 His tree trunk was way more unique than what I would've created. He glued everything on and had such a good time. 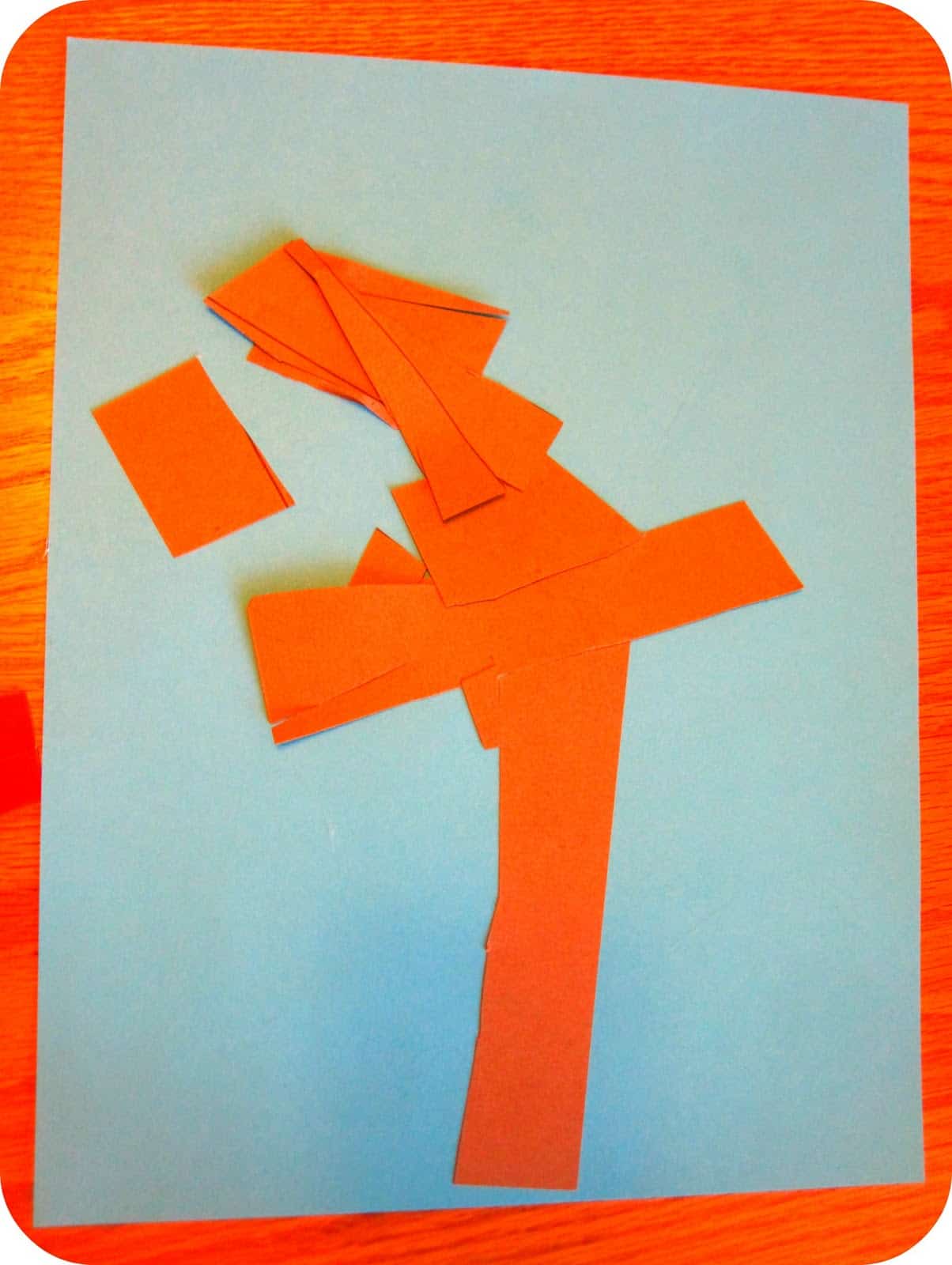 Last, but not least... he added his Fall foliage and glued it down. 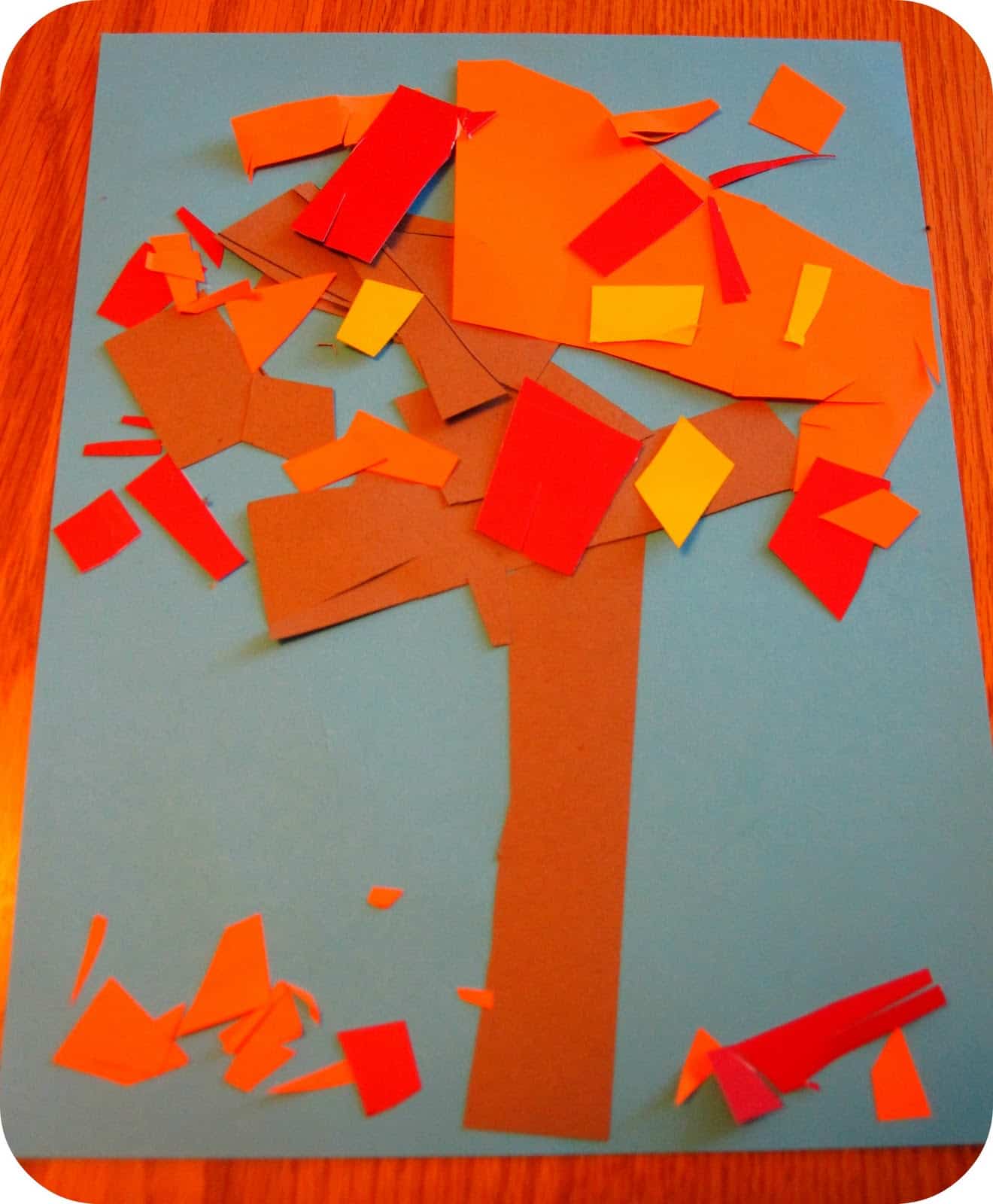 Since he's been learning all about arts & crafts tools at preschool... this was like his dream come true activity. After he was done he just twisted the glue stick up and down and talked about his great cutting.

I was paranoid that he'd try to cut something non-paper... but he did such a good job. No hair cuts today (knock on wood!).

We will be posting many more projects where he gets to man the scissors! I love giving him any opportunity to explore and practice. I want him to have strong fingers! He's still trying to figure out which hand to use and will switch back and forth (or use both hands) and we'll try out different grips and it is cool to see him problem solve until he discovers the right way... and then forgets again when he puts the scissors down... and starts the cycle all over again.

- an emphasis on descriptive language and using adjectives to talk about the sizes, shapes, colors, etc. of the leaves/branches/trunk. We also talked about how he cut- little snips, big cuts, long cuts, etc.

- review of prepositions (put the branches under the leaves, put the leaves on the bottom of the paper, etc.). Either I gave him instructions or I sometimes narrated as he created... but mostly, we just talked about his images once he was done creating (so he wasn't too distracted). He would tell me things like "The trunk needs to touch the ground on the bottom of the paper..." and I would positively respond to his correct statements! If he said under but was supposed to say over, I would repeat what he said in the correct way, modeling the right way to say the phrase/sentence.