We love playing life sized games that get us moving! Earlier this month we got a chance to check out the recently released DVD Mike the Knight: Mike's Christmas Surprise. In the story Mike and his family get accidentally turned into board game pieces and the family has to work together playing the game to help them return to their "normal" size.

After watching Mike's Christmas Surprise, my kids have been wanting to make our own life sized game. Instead of making a board game like we have shared before (check out our Escape from the Volcano game and Save the Earth game), we decided to create a life sized number game for the kids to move around on. 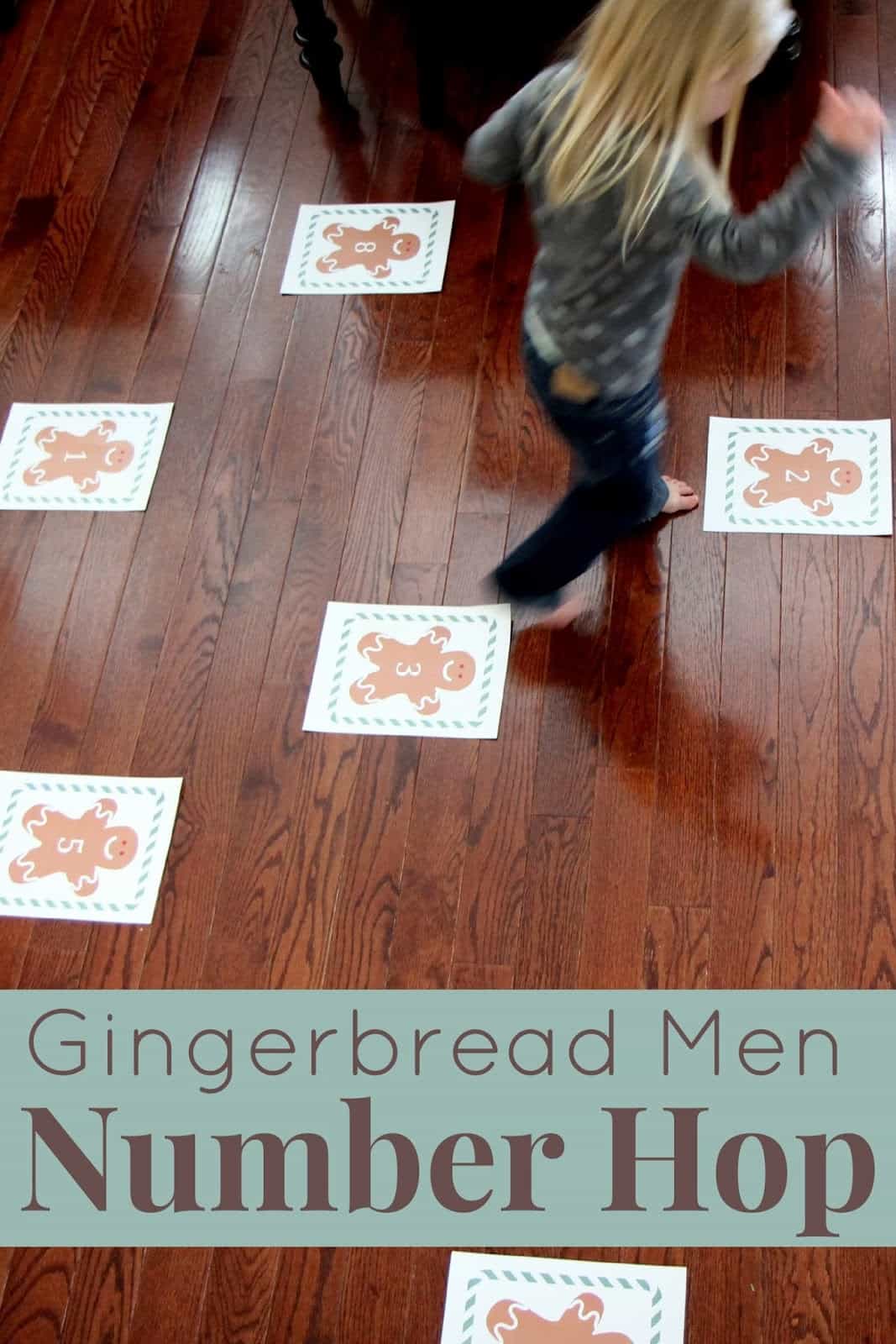 Our Gingerbread Men Number Hop game helped my kids with number recognition, counting, and even simple addition... while also practicing jumping and moving from one place to another!

To play all you need is some painters tape, cardstock, my free printable gingerbread men file, and some space to move around.

Start by printing out the number cards onto cardstock. I printed #1-10 for my 3-year-old. If you have older kids, just print off blank gingerbread men (page 11 of the pdf) and write the numbers you want to use on them with a Sharpie. For example with my 5-year-old I would write double and triple digit numbers instead of single digit ones. 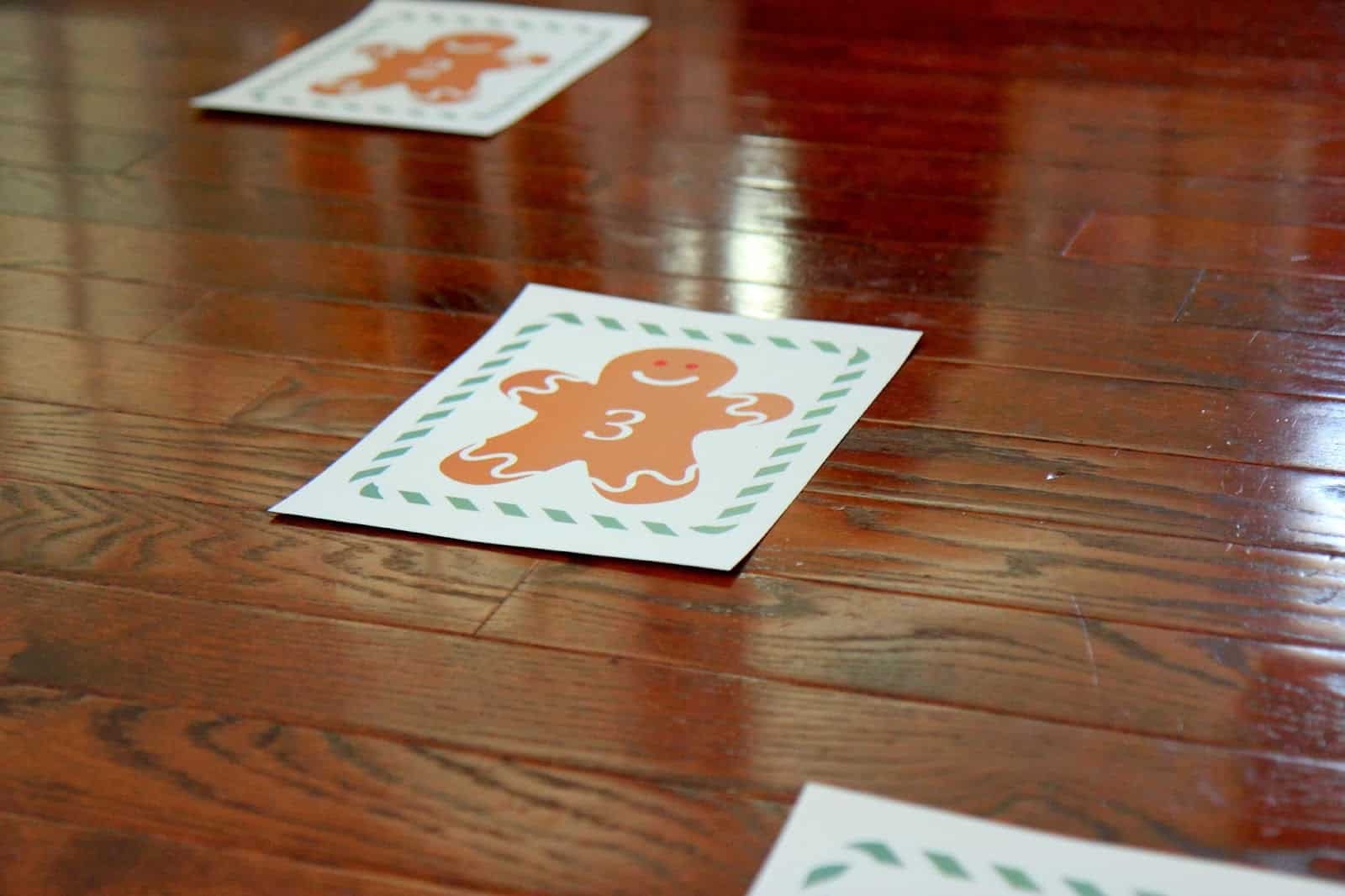 Once you have your printables, secure them to the floor with tape. Have them start on one side of the room and extend in various ways to create several paths across the room to the other side. 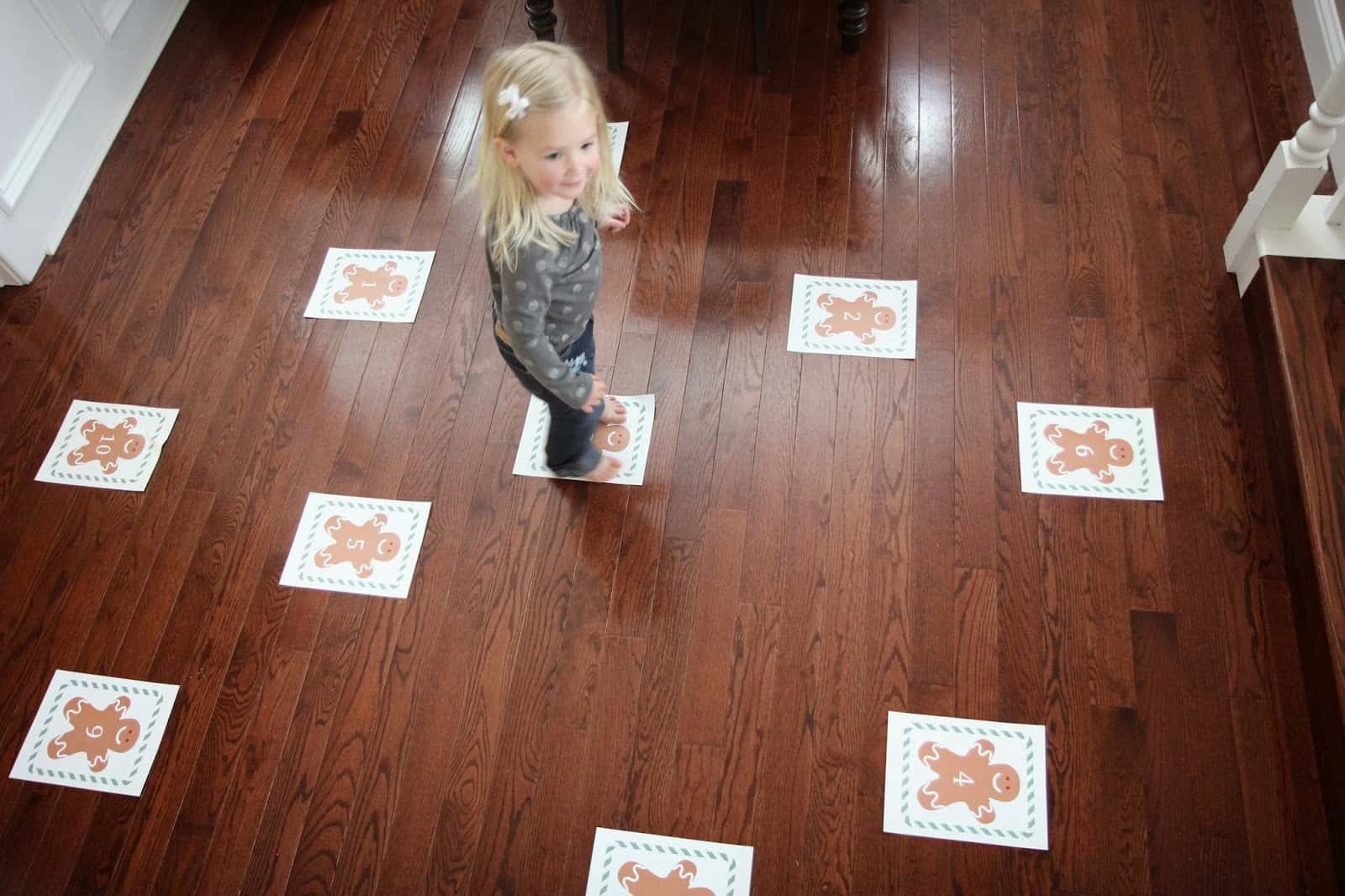 Once the papers are secured, have the kids each start on a number and say its name. Then tell them to say another number that they see. Once they correctly say the number's name then need to hop from their number to that new number. Then they can say the next number and hop to it. Kids will slowly move across the room using this technique until their reach the other side. Once they are on the other side they can try and come back. We practiced saying the names of each number before we started playing and this activity really helped solidify how to recognize #1-10 for my daughter. 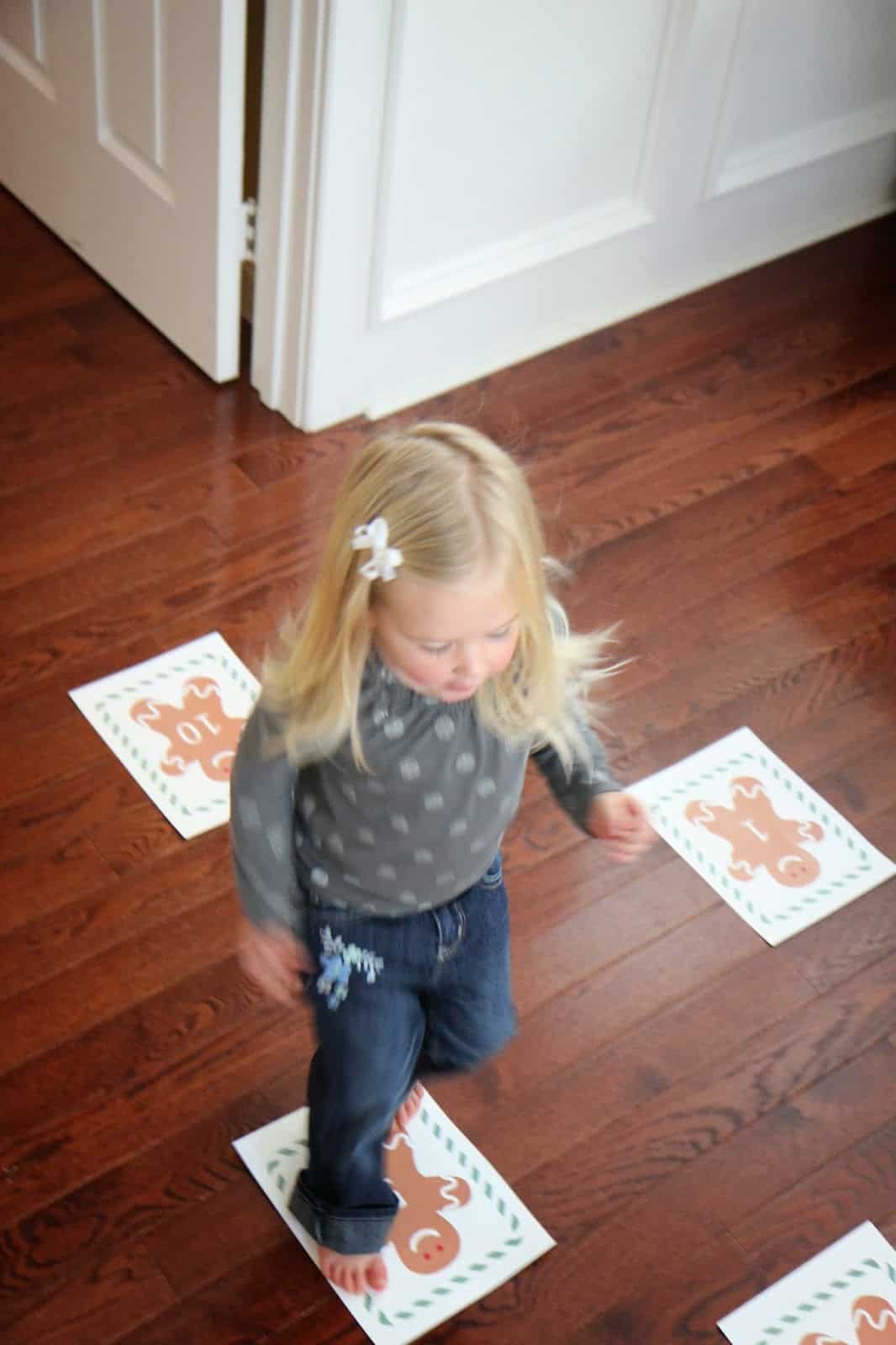 I adapted this game for my 5-year-old by having him start on a number and find another number close by to jump to. He had to say that number and add it together with the number he was standing on and say the answer. Once he quickly did that and got it correct he could jump to the next number... and play again.

Even my one-year-old had fun running around on our life sized number hop game board and pretending he was playing... while getting lots of energy out!

If you didn't download them already, you can find my free printable gingerbread men number hop cards here. 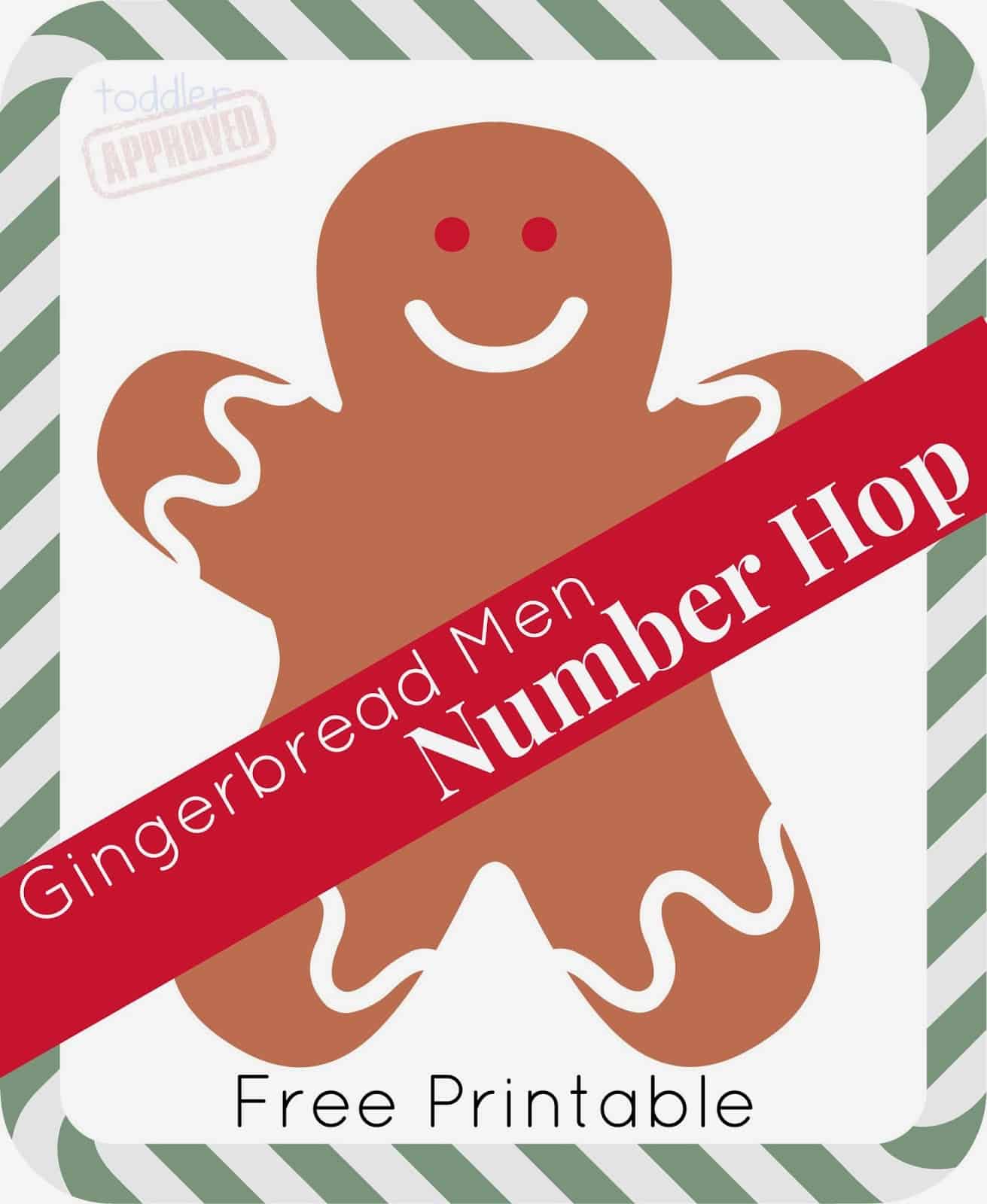 This post is part of our weekly Move & Learn series! Make sure to check out the other posts shared by my co-hosts:

10 Ways to Go on a Christmas Scavenger Hunt via Hands On: As We Grow

Also, if you love Mike the Knight or any of these other awesome titles from NCircle, head on over and participate in the 12 Days of Giving Giveaway on NCircle's Facebook page! Each day they are giving away some awesome DVDs and they will be making a matching donation to the KIDS Charity after their 12 Days of Giving giveaway ends! We've enjoyed partnering with NCircle during 2013 to share some fun things with you! We are not being compensated for this post but thought you might enjoy this awesome giveaway if you are looking to add some new DVD titles to your collection this winter.