Don't laugh. We like to make up random games sometimes. Today's materials that I was trying to use were empty play-doh containers. I feel like we always have some of these because "somebody" in our house sometimes forgets to close the containers and the play-doh gets hard and gets chucked. (Anyone have a trick to revive old hard play-doh?) 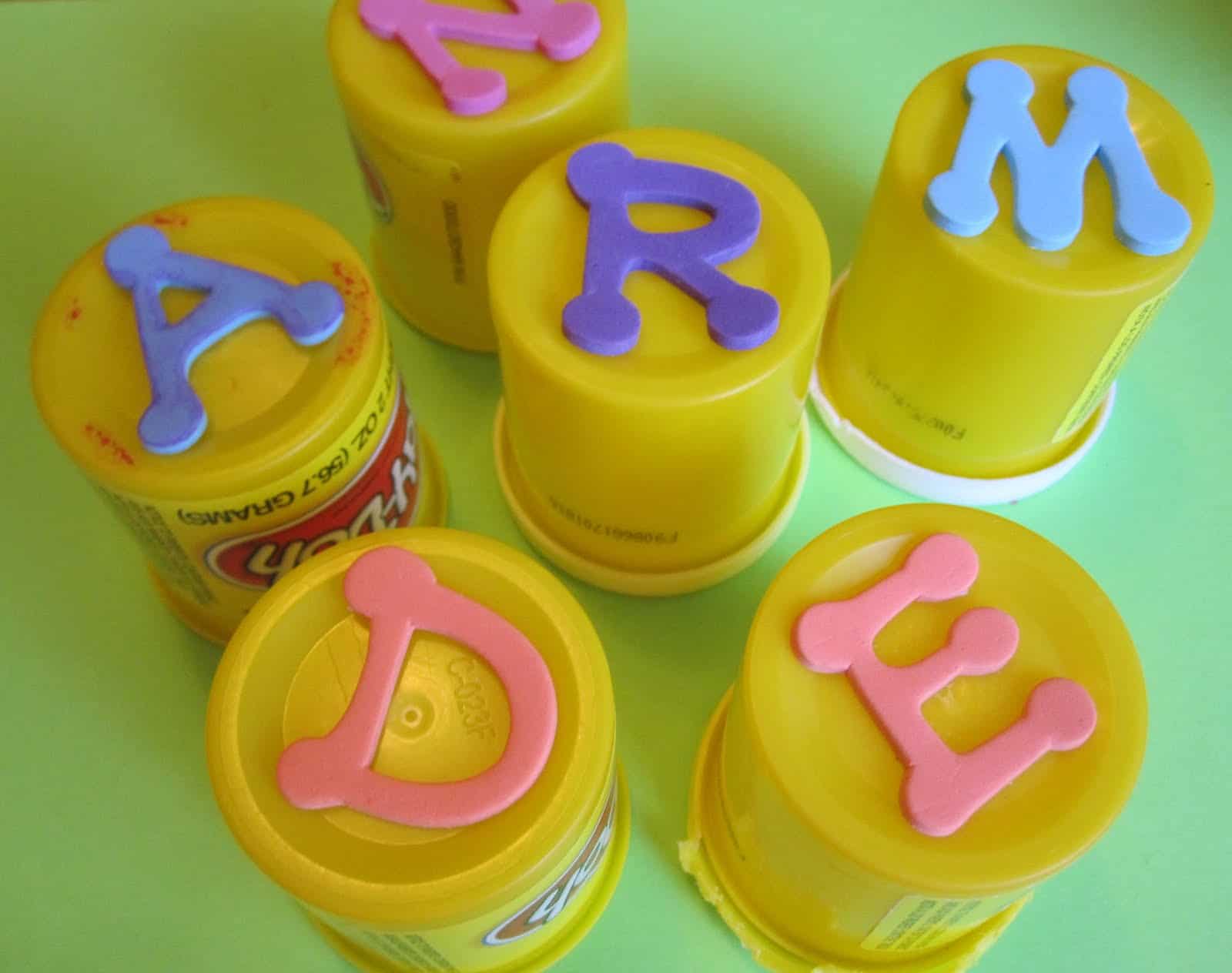 Goals for the game

- learn a word or two that start with each letter (ex. egg starts with the letter E).

- listen to the letter sound or word said aloud and be able to identify the alphabet letter referred to correctly.

Materials Needed: Play-doh for number of letters in child's name (we needed 6), scissors, alphabet stickers, and pictures of objects that start with each letter in child's name (see example below). I made mine use MS Word and Google images.

2. Print out word picture cards and cut them out. 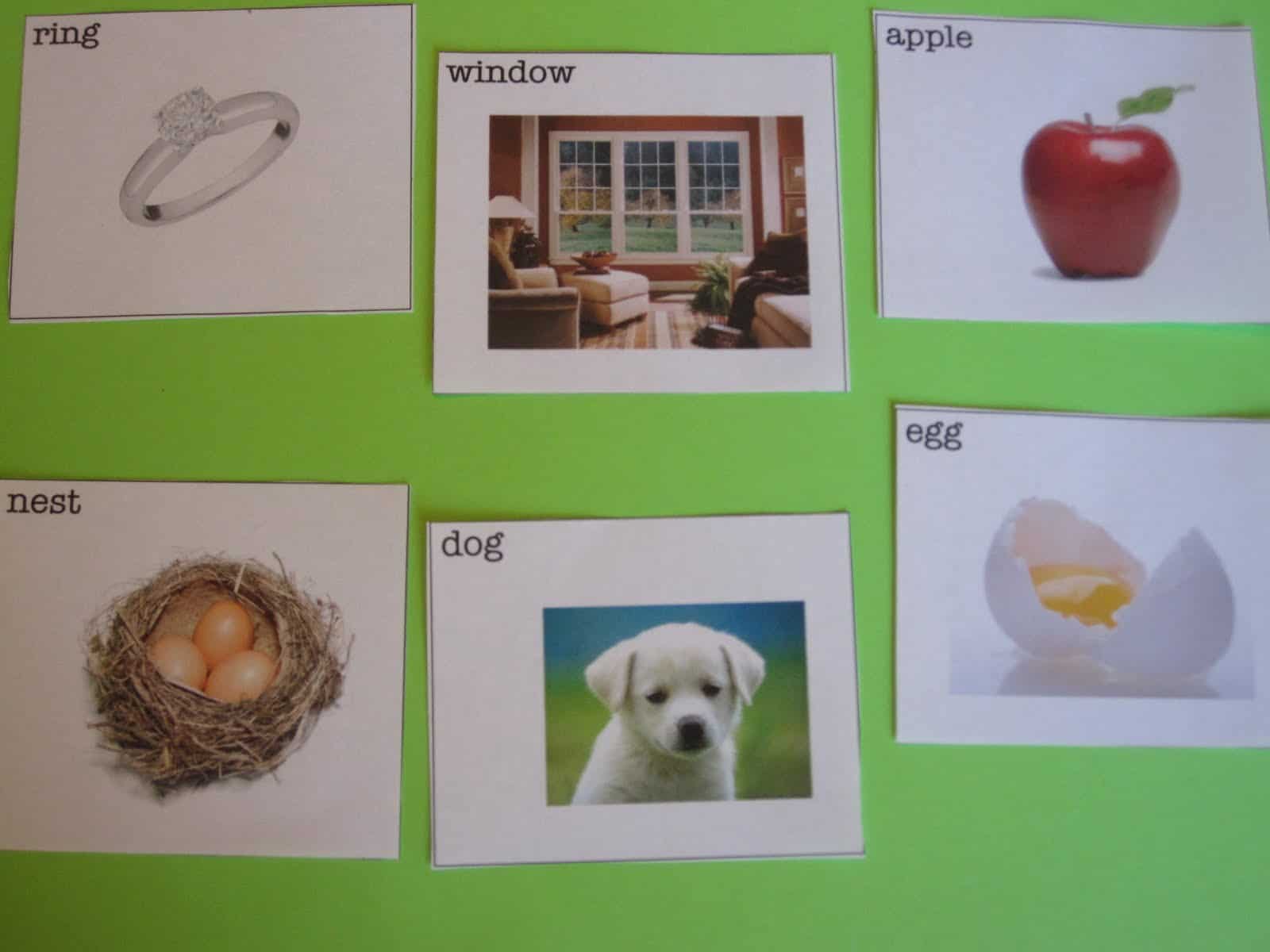 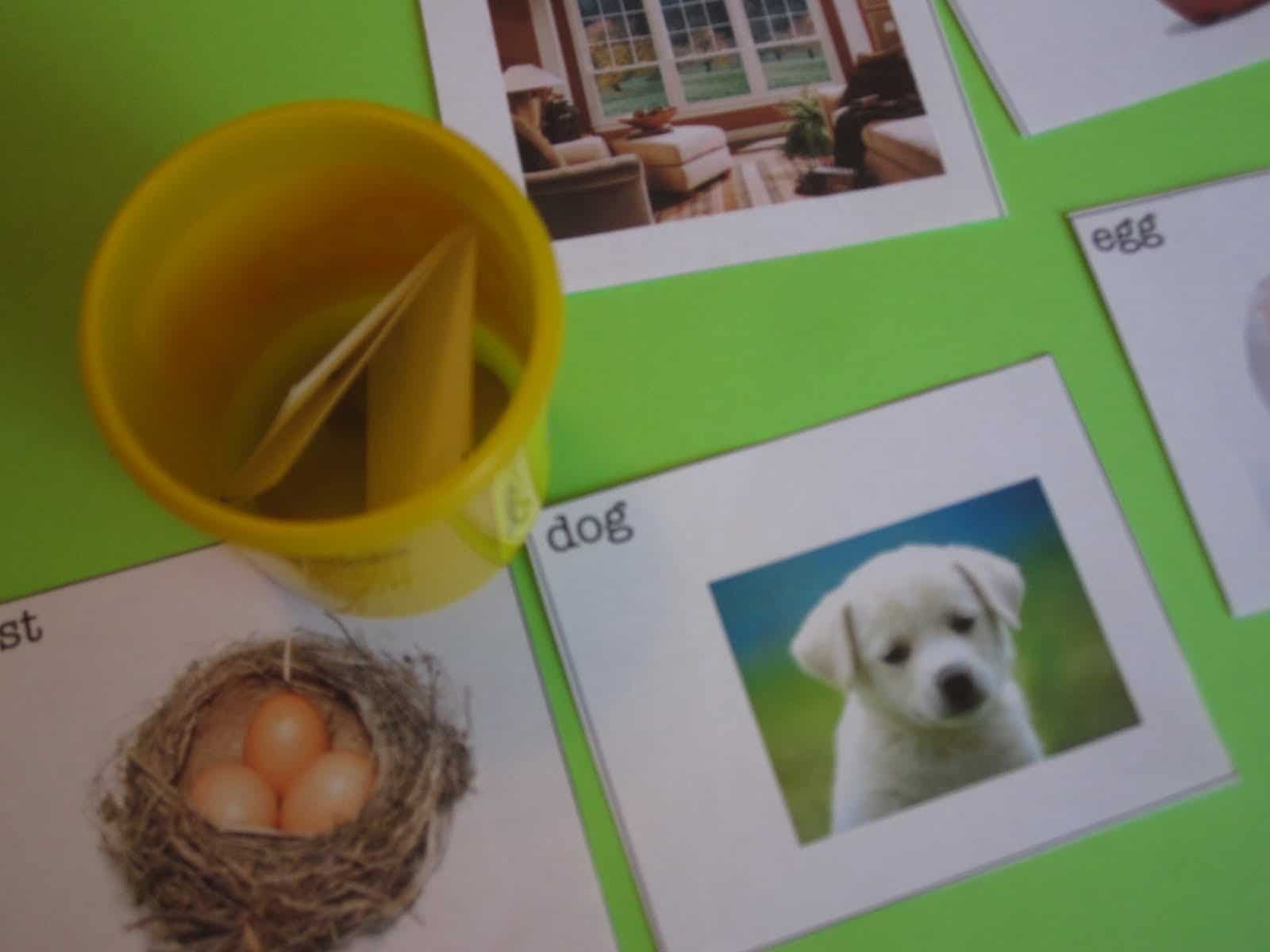 4. Pop the top back on and turn the containers upside down (letters facing child). 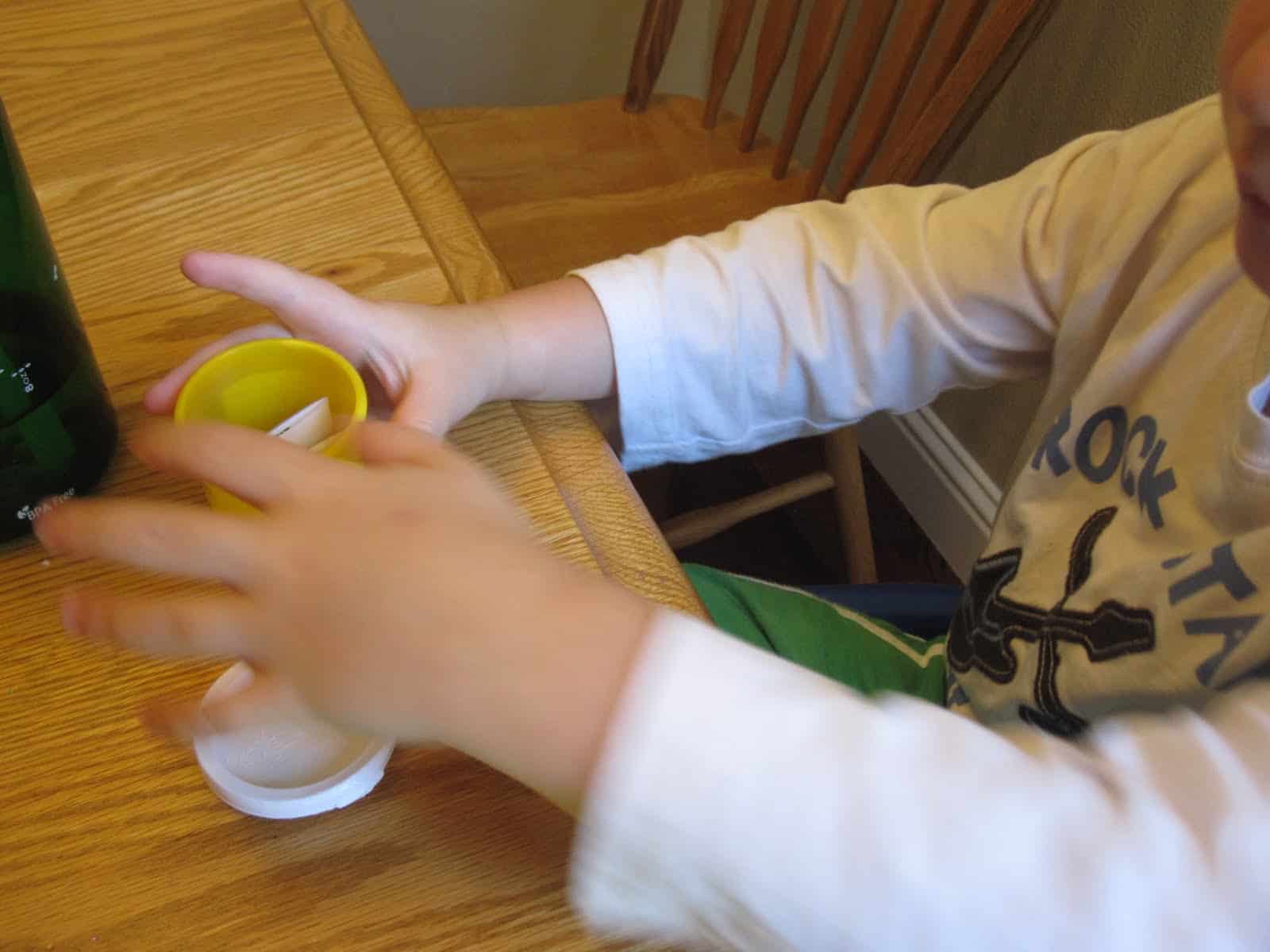 5. Start playing! Say the word that you want your child to look for and set them off on a hunt! When they figure out which letter the word starts with (Ex. egg starts with an E), relate that letter to their name. "E is a letter in your name! It comes after... and before... E makes the sound /e/!"

Keep playing until all the word pictures of objects are found and each letter is talked about!

These are easy to refill with new words or new objects when your child becomes an expert at finding the first set of words. 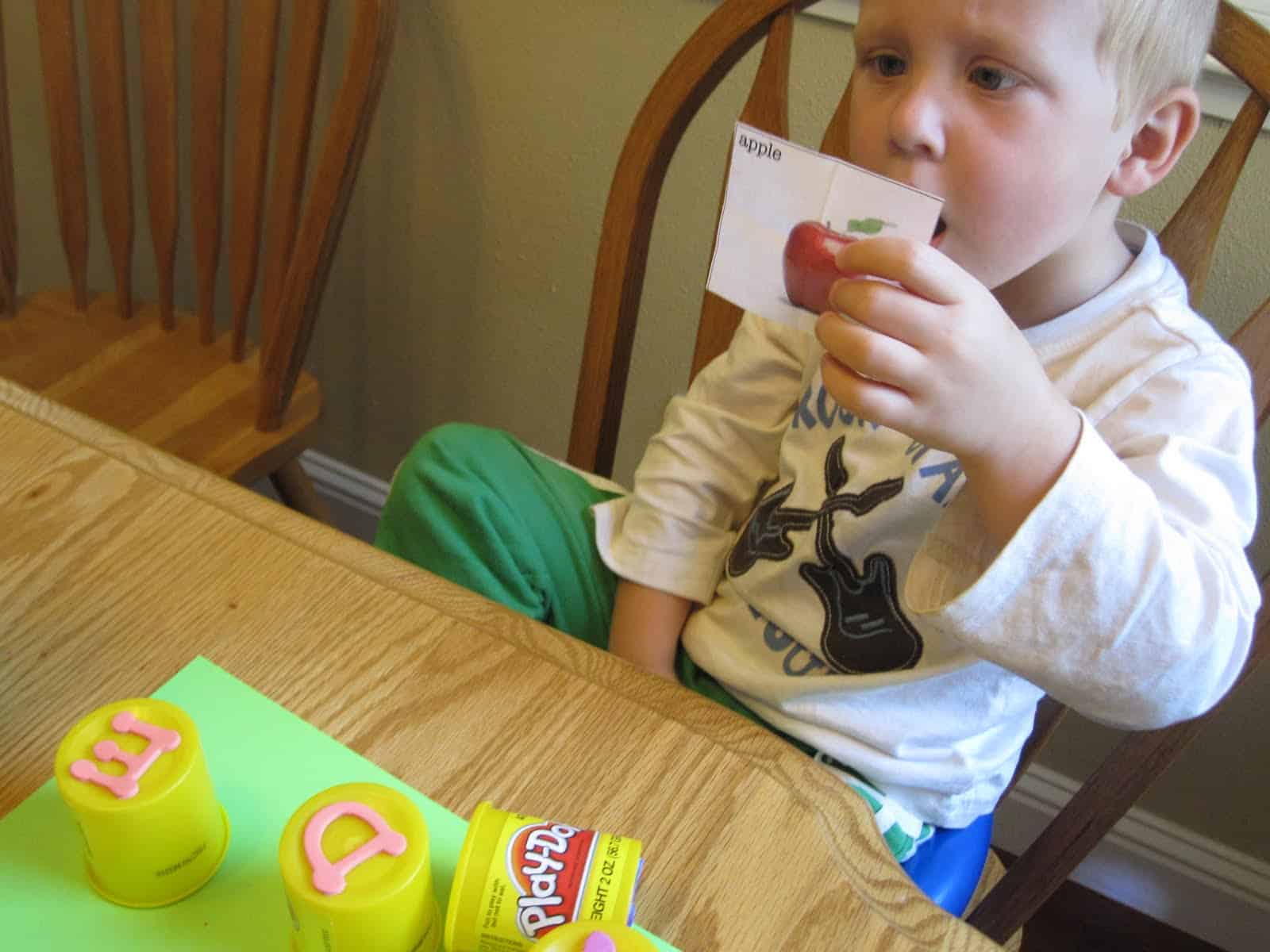 My little guy was so proud of himself for recognizing each letter and loved that each letter was in his name too! Because we just focused on the letters in his name, and not the whole alphabet, this activity wasn't too overwhelming either.

I was mostly excited about finding yet another way to re-use my play-dog containers. The stickers can easily be pulled off so that you can re-use the containers again and again for other projects too!