My cute little guy has been a grump with a capital G lately. I have been trying to spend some extra 1:1 time with him during the baby's naptimes so that I can hopefully help him snap out of it. I think I was so relieved to have my arms free during naptimes that I would get busy catching up on laundry and dishes... and the little guy was starting to miss hanging out with me and having my full attention. 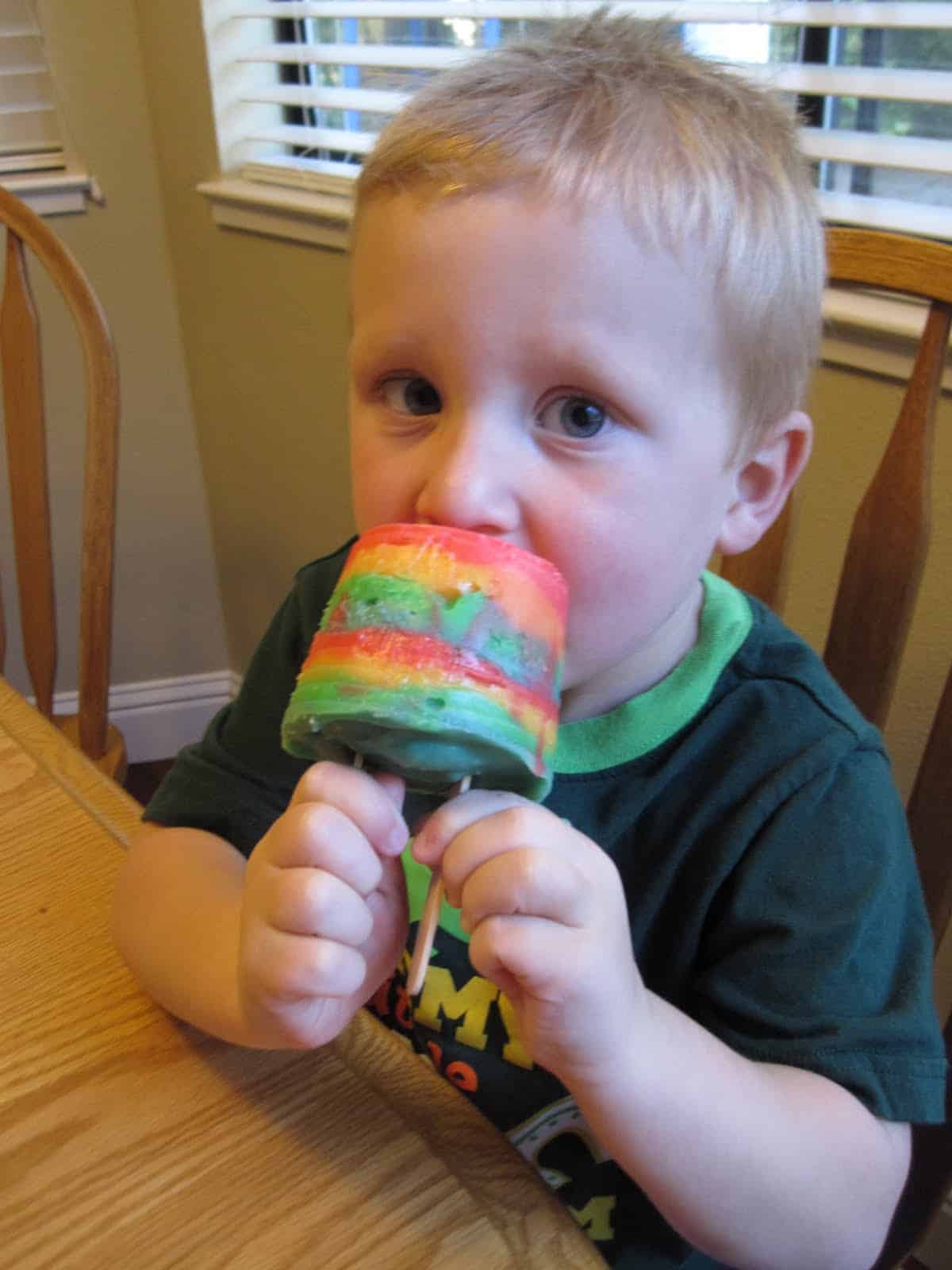 The ingredients are all mentioned here, but I'll give you a quick rundown- 2 cups cold milk, box of vanilla pudding, and food coloring.

We also used a big bowl (my favorite are the ones with good grips on the bottom so that little mixers don't accidently knock the bowl over), a wire whisk, little bowls for mixing the colored pudding, popsicle sticks, and plastic or paper cups. 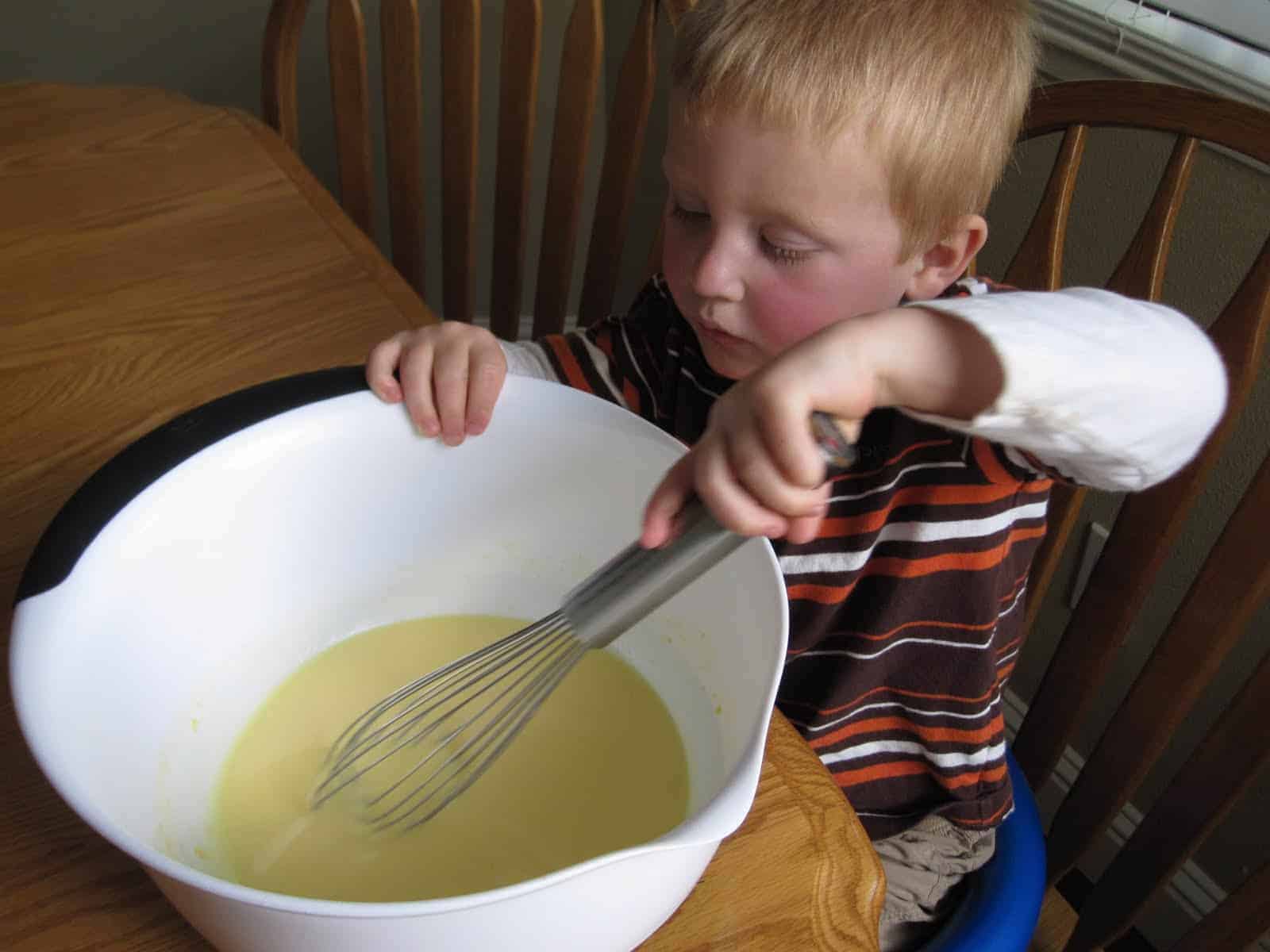 Our pudding popsicles were HUGE and each one required two sticks... mostly because I only had larger plastic cups. If I were making these for a party or a group of kids, I would definitely have gone out and gotten dixie cups. 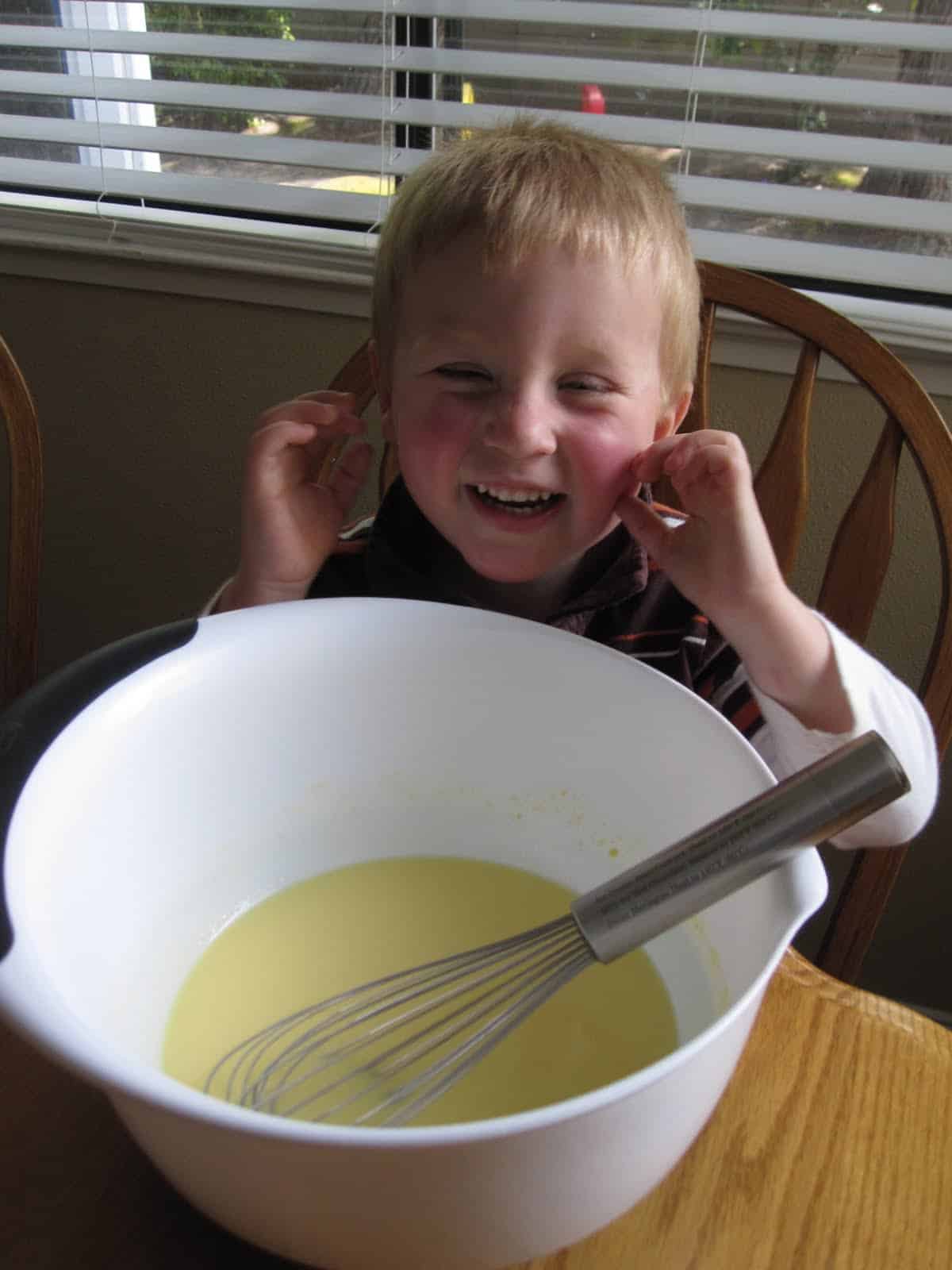 After we made the pudding (following the directions on the box), we divided it into little bowls (after my son did some tasting), and added some food coloring. We only made red, orange, green, and blue. 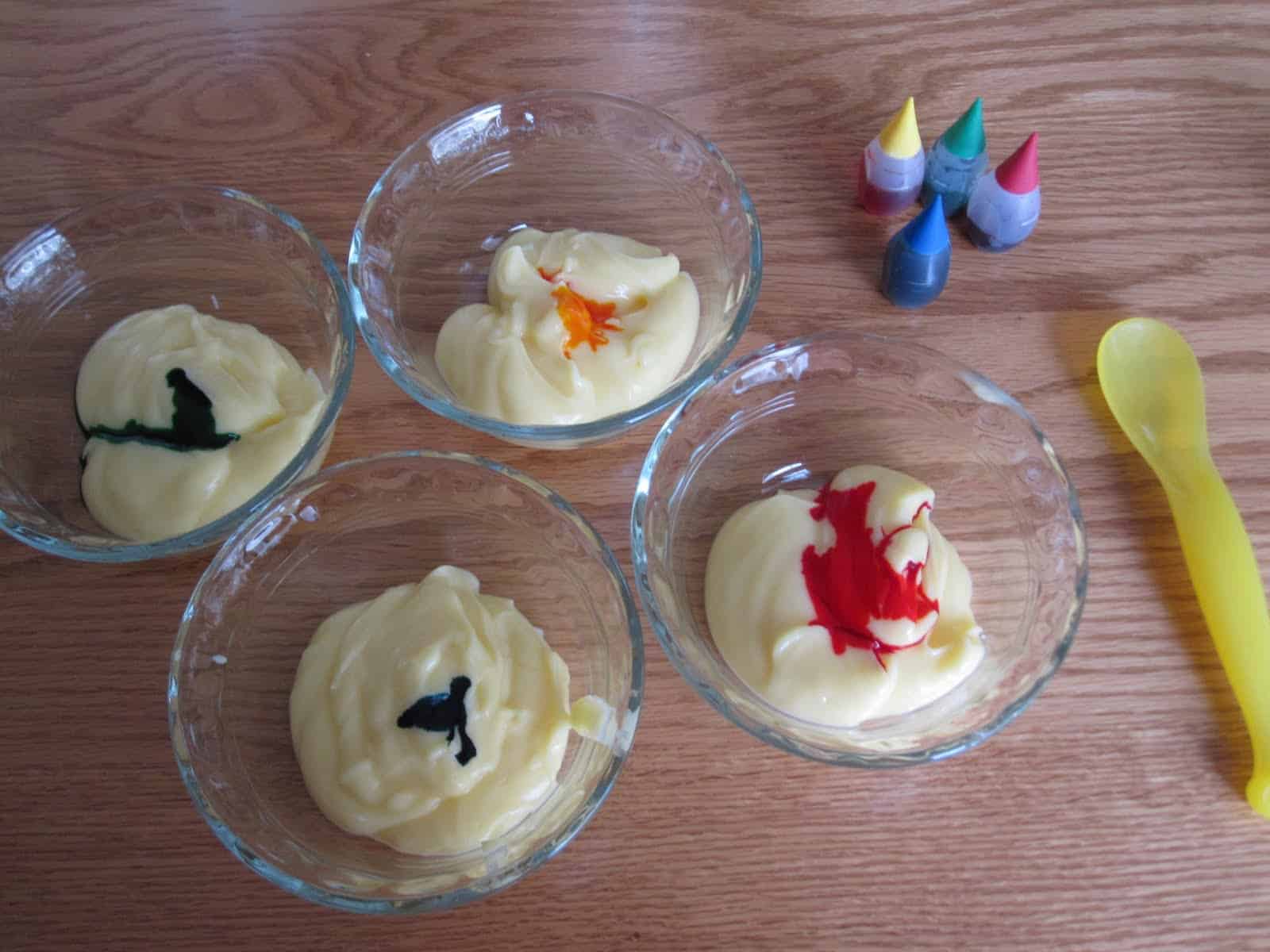 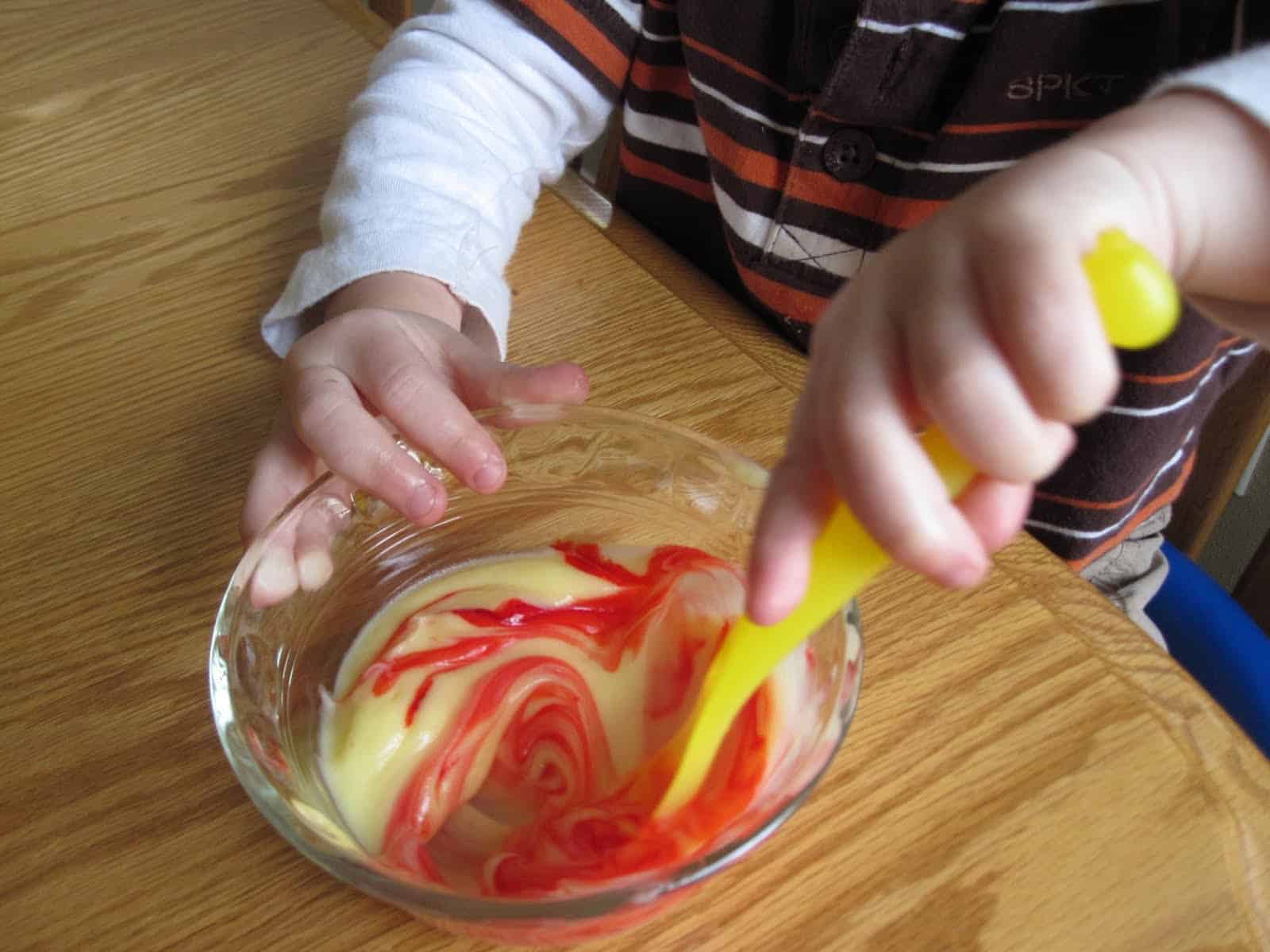 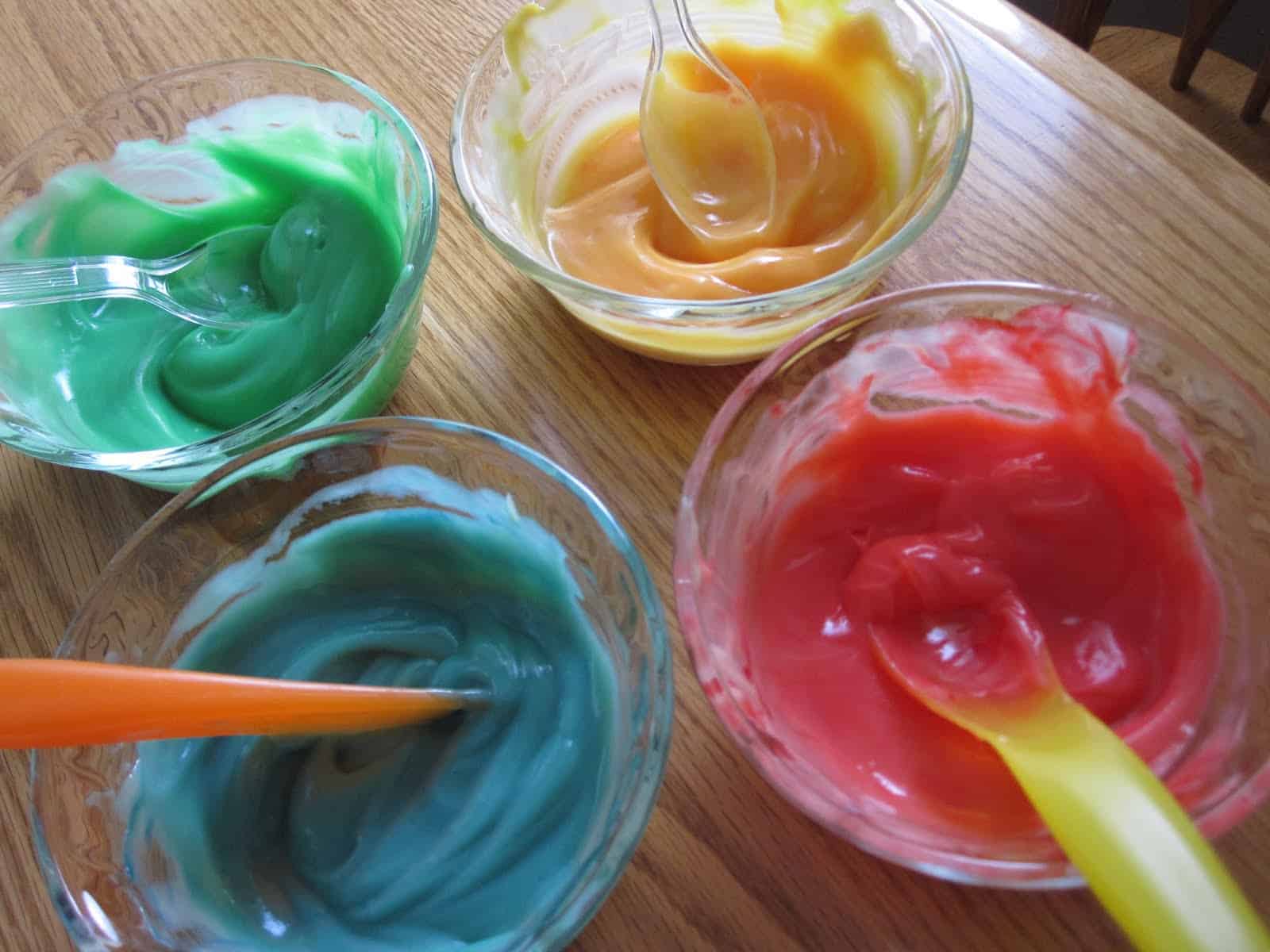 Next we layered the pudding into the plastic cups. While we layered it, we talked about patterns and what color came next. We did two rounds of each color... so that we ended up with a fun pattern. 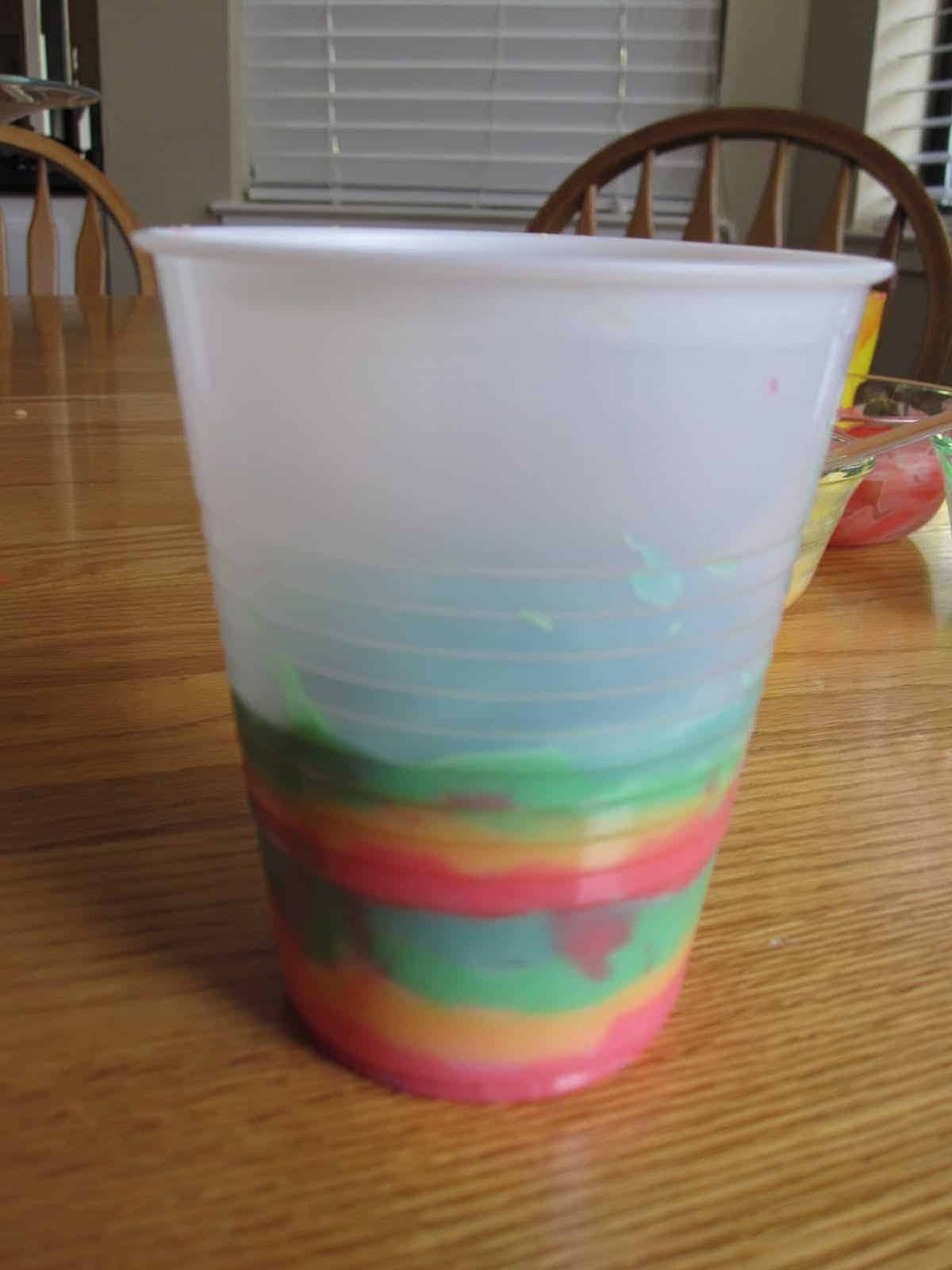 We added foil to the top and stuck two popsicle sticks in each cup. 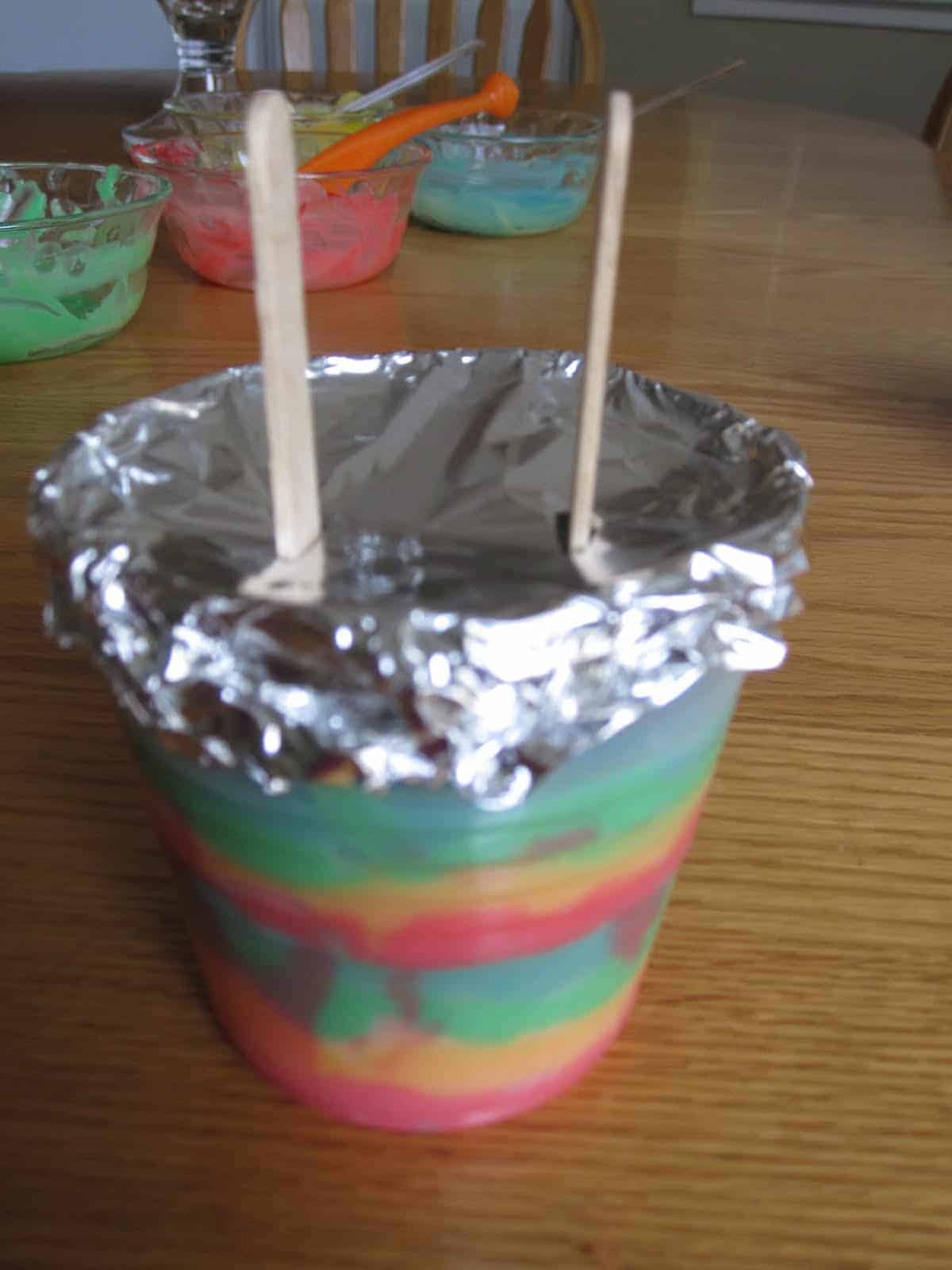 Then we stuck it in the fridge to harden up a bit and then into the freezer for the rest of the day (probably 3 hours).

When we got home for the day, we cut the plastic sides of the cup and peeled them off to reveal the popsicles! 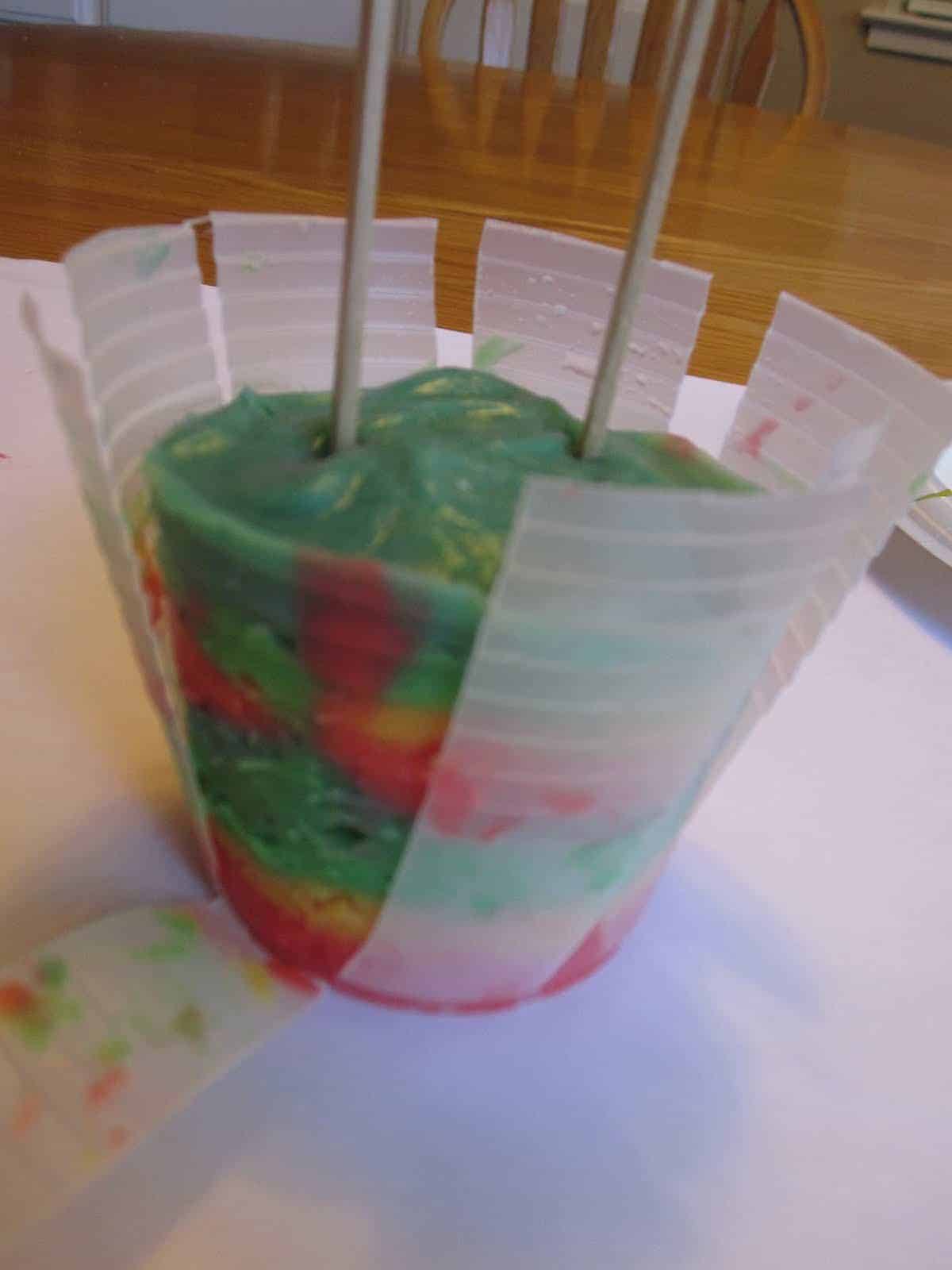 My little guy was SO EXCITED to feel his popsicle. It was such a different texture than the pudding we started out with! 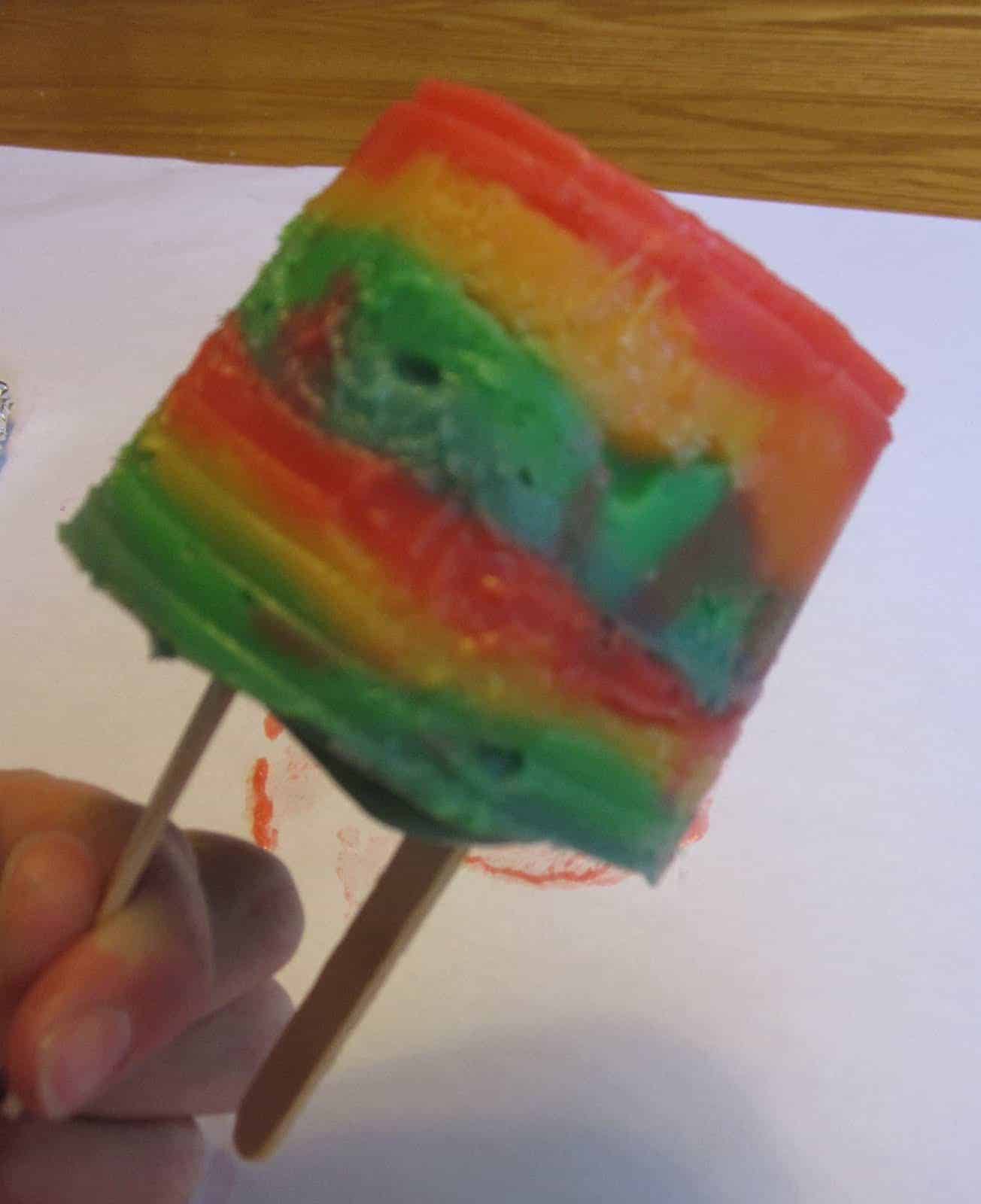 He dug right in and started eating immediately!! He probably finished 1/3 of it before we stuck it in another cup to finish tomorrow. I don't think I have seen him this focused on eating something in quite awhile! I might have to figure out how to make veggie popsicles later this summer 😉 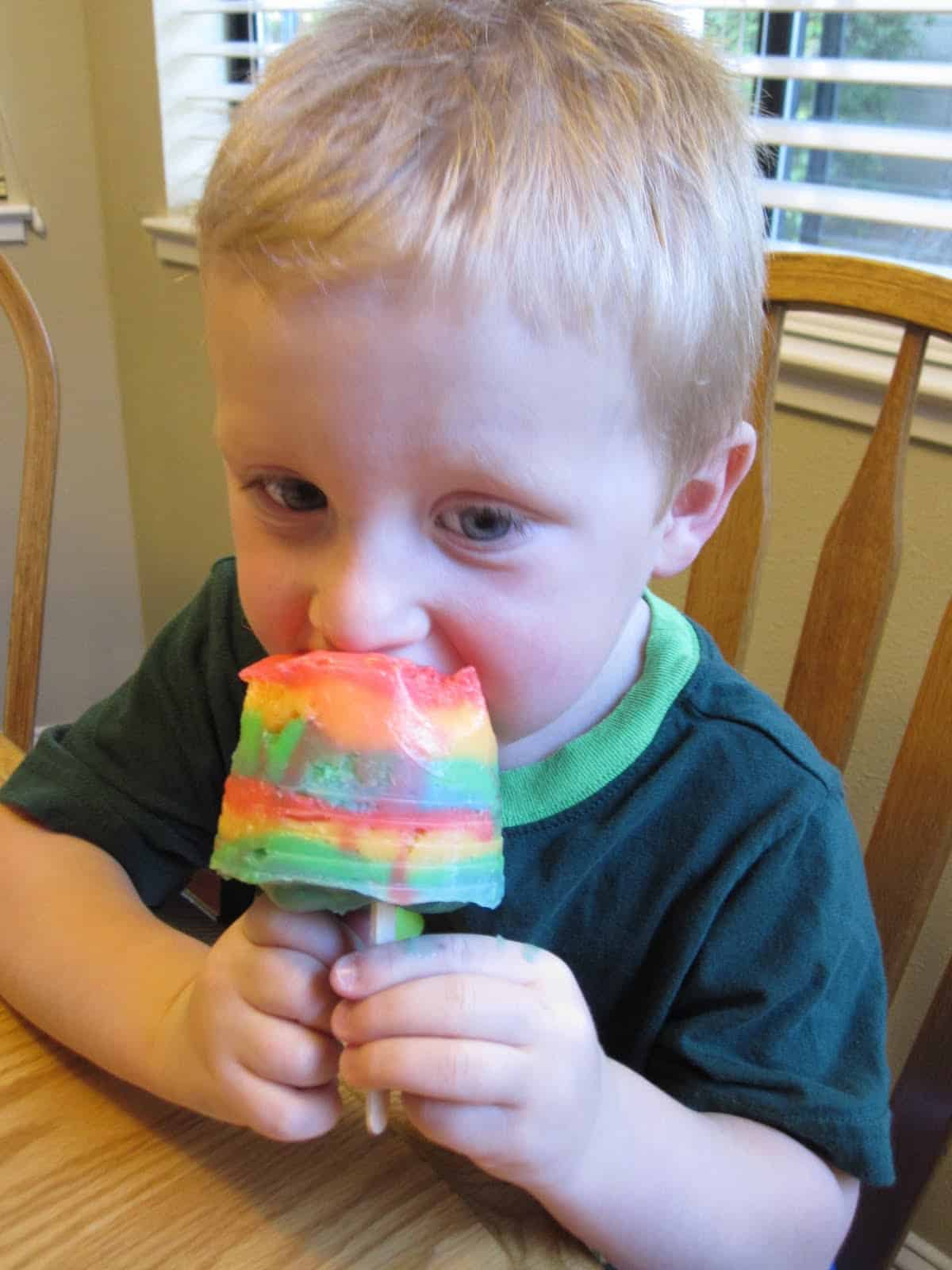 He loved counting the layers, feeling the coldness of the popsicle, talking about the colors, and telling me about the patterns while he chowed down. 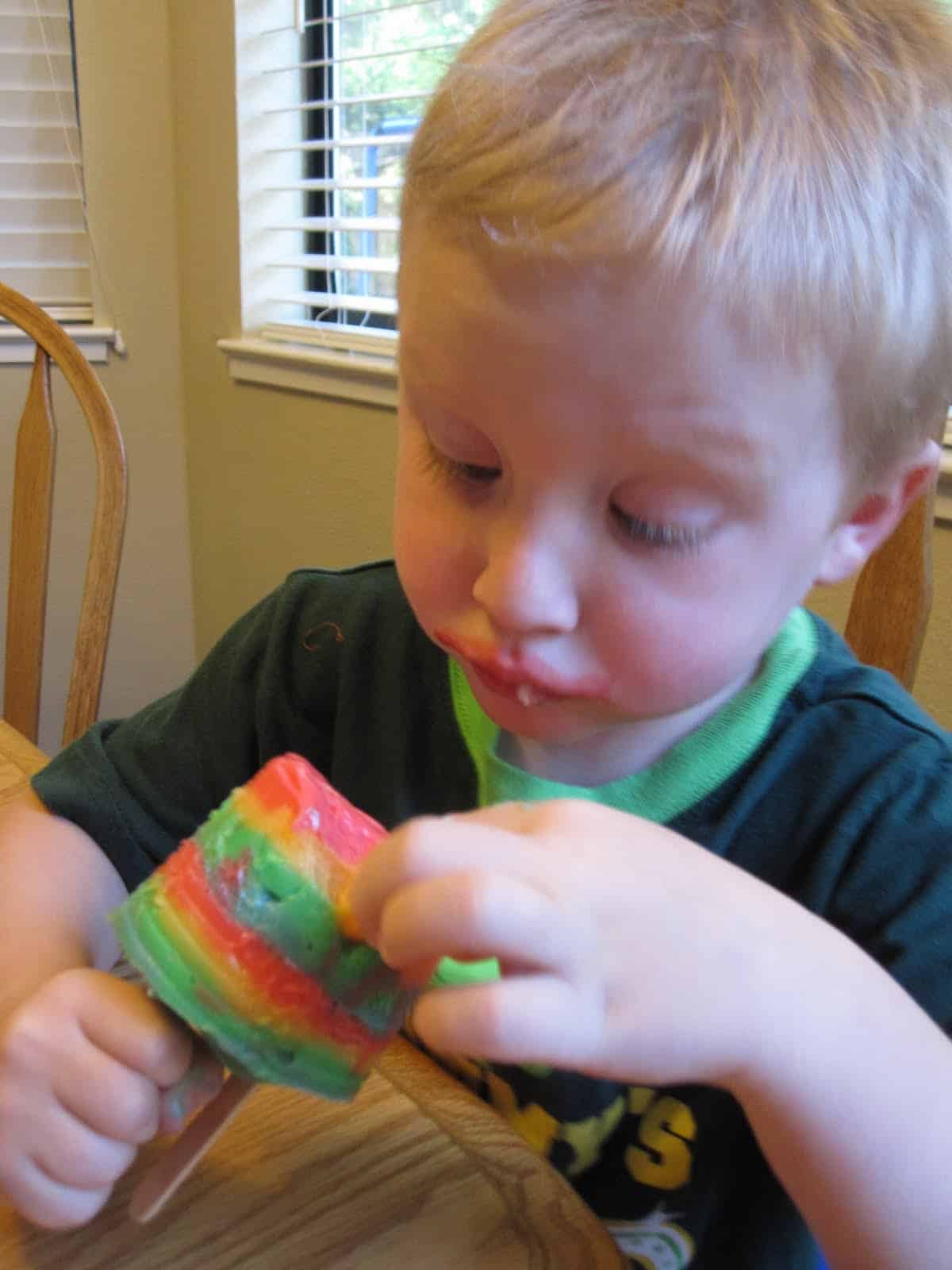 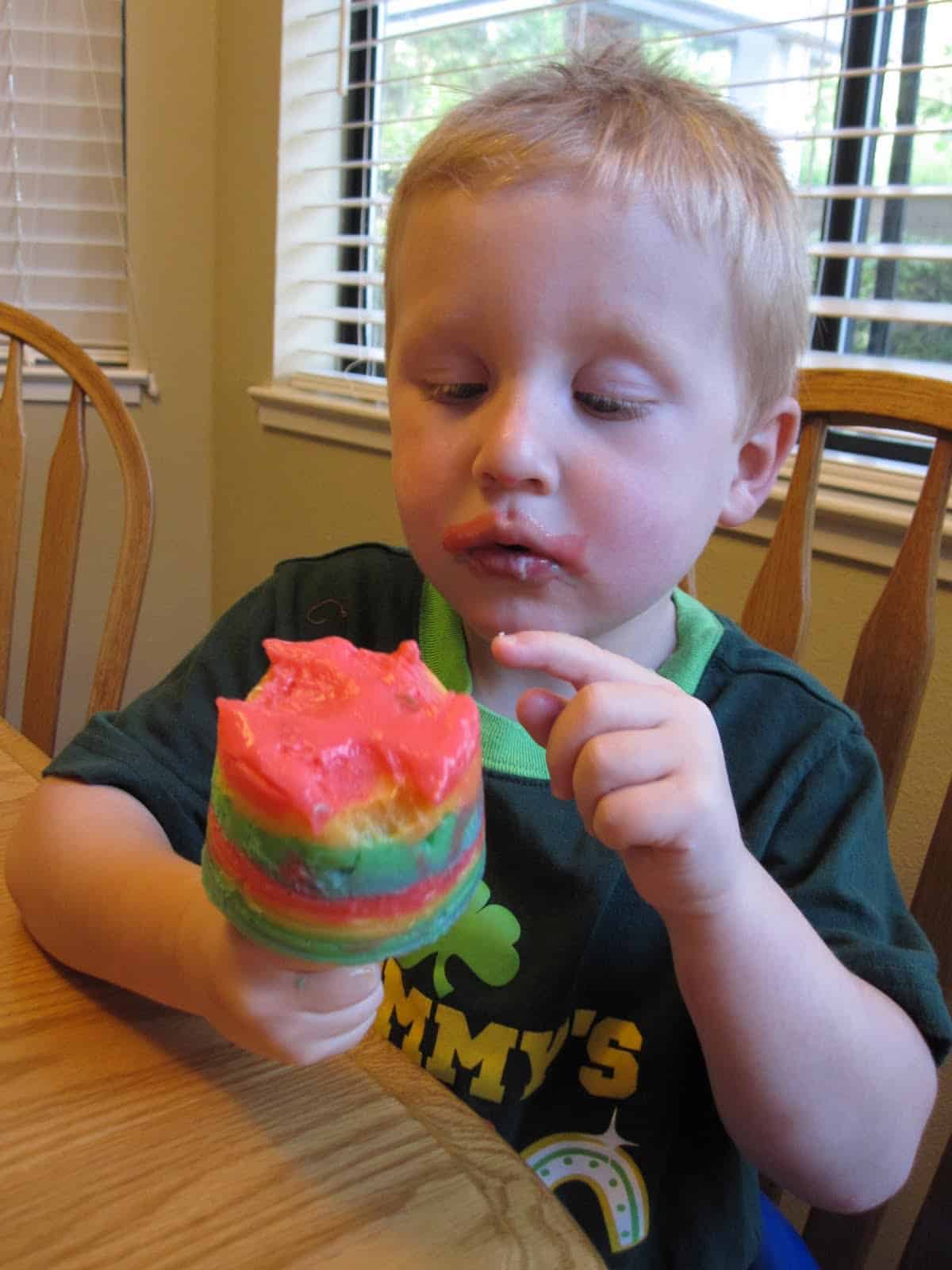 All of his big smiles during this activity totally made my day! 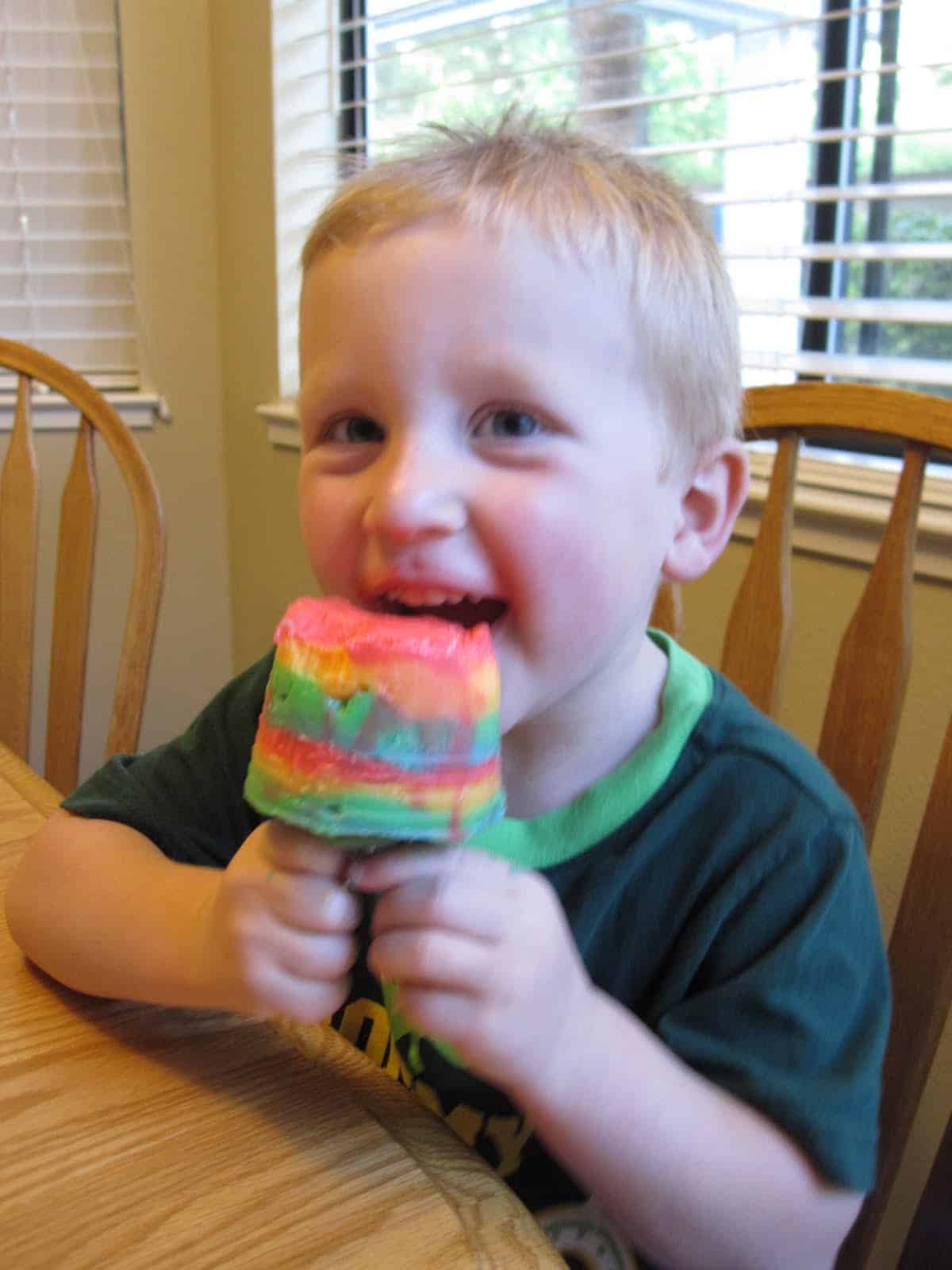 We are definitely adding rainbow pops to our "must make lots and lots of this" list for summer. 🙂

Do you have any other favorite summer popsicle recipes?