This week has been a bit of a whirlwind. My husband and I went to Dallas for two days and I've spent the rest of the week trying to recover. We didn't fit nearly as many pumpkin activities into the week as we wanted, but we tried!

One of the days last week we pulled out a variety of supplies and created some pumpkin collages using shapes! 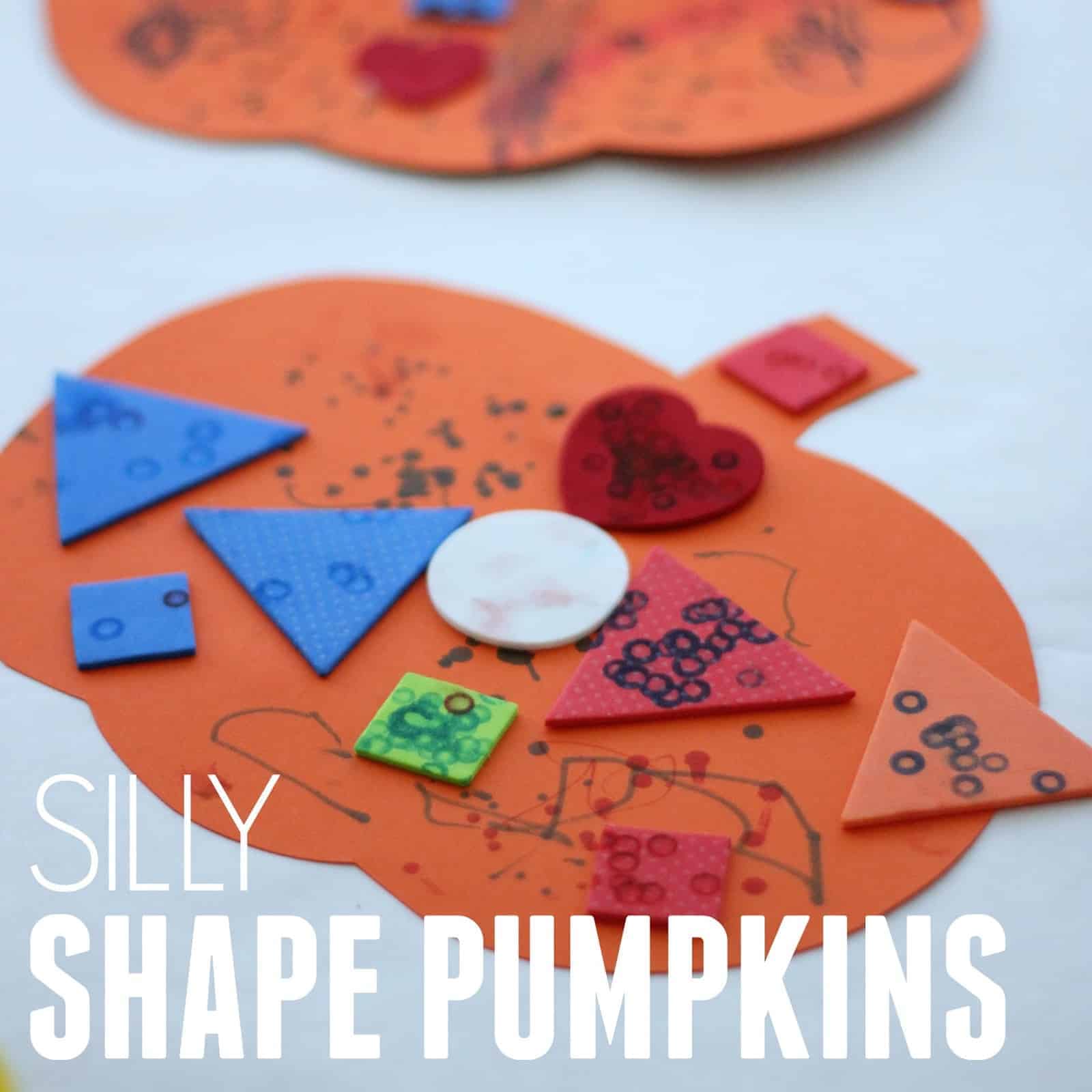 Our goal was to use the shapes to decorate the pumpkins and turn them into jack o' lanterns. I gave the kids a lot of free range on this activity, so their pumpkin masterpieces weren't as "picture perfect" as I would'e made, but they were "perfect" because the kids really enjoyed creating them! 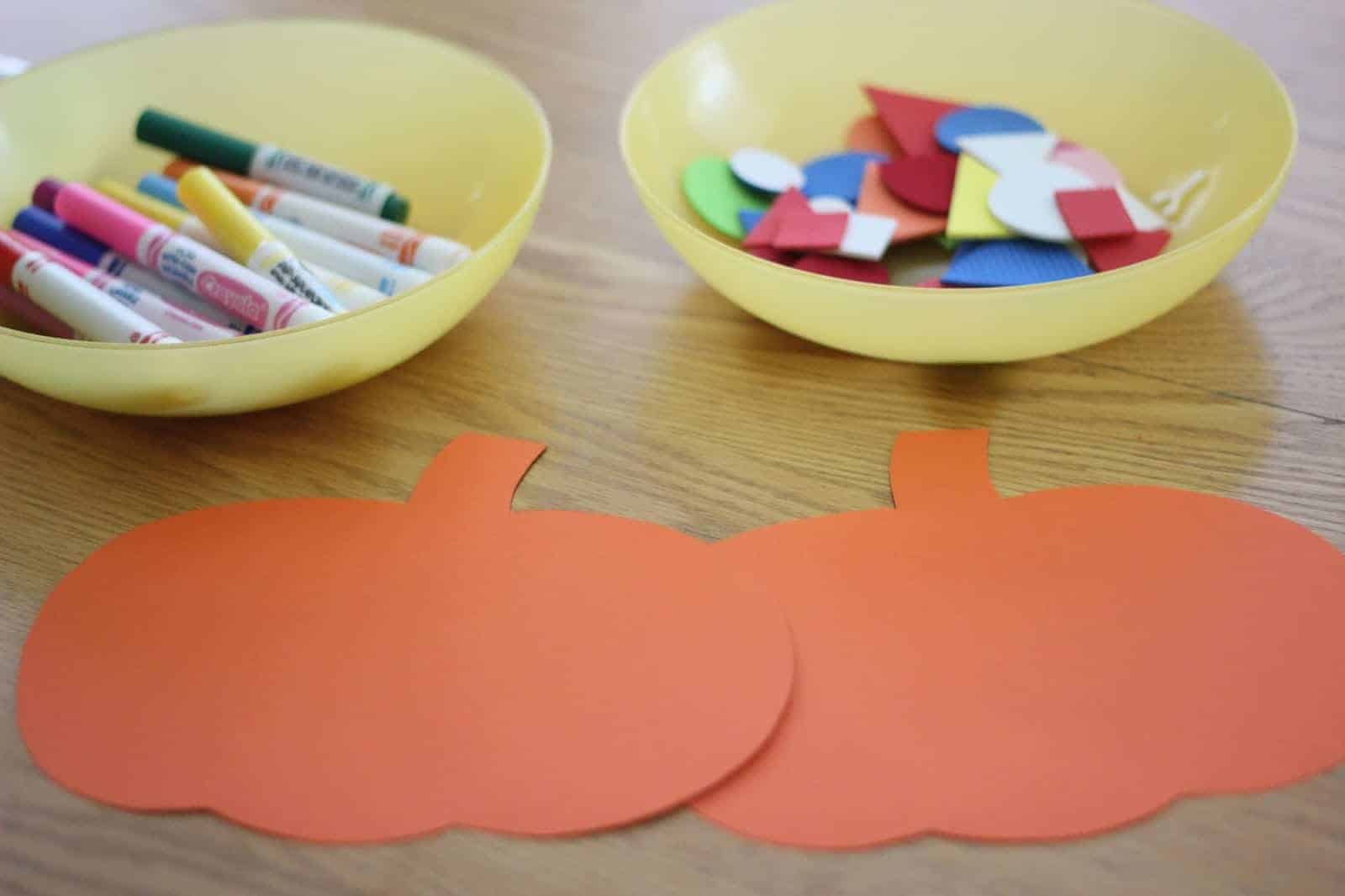 HOW TO CREATE SHAPE PUMPKINS

Since this was a collage craft it was really open ended. We set out materials for the kids and then they decide how much they wanted to put on their pumpkins and where! We used foam shapes for the pumpkin details and the kids used triangles for eyes, circles for eyes, and other shapes for noses and mouths. 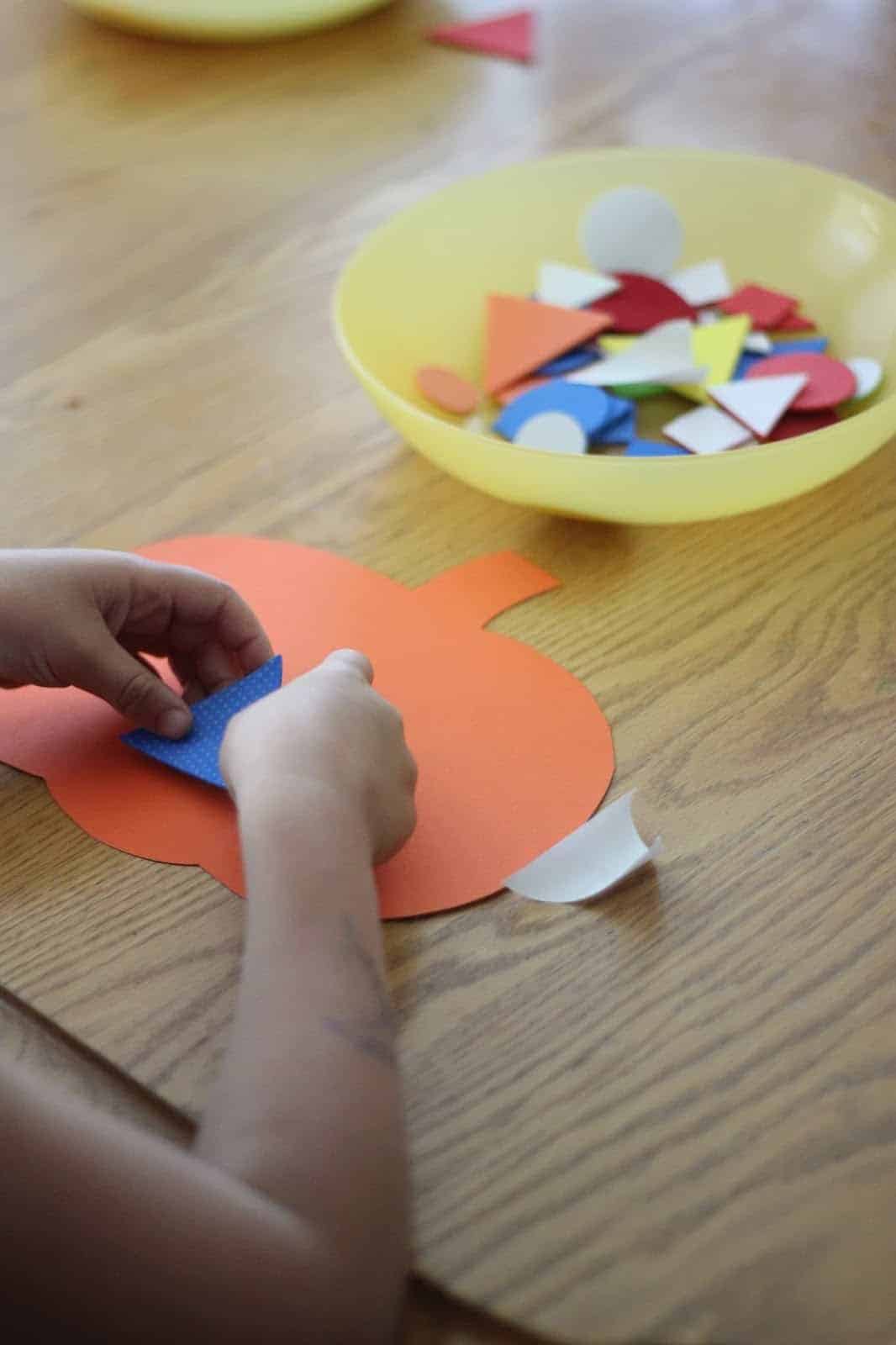 Once they got all of the shapes on the pumpkin, they used markers to decorate their pumpkin creations. 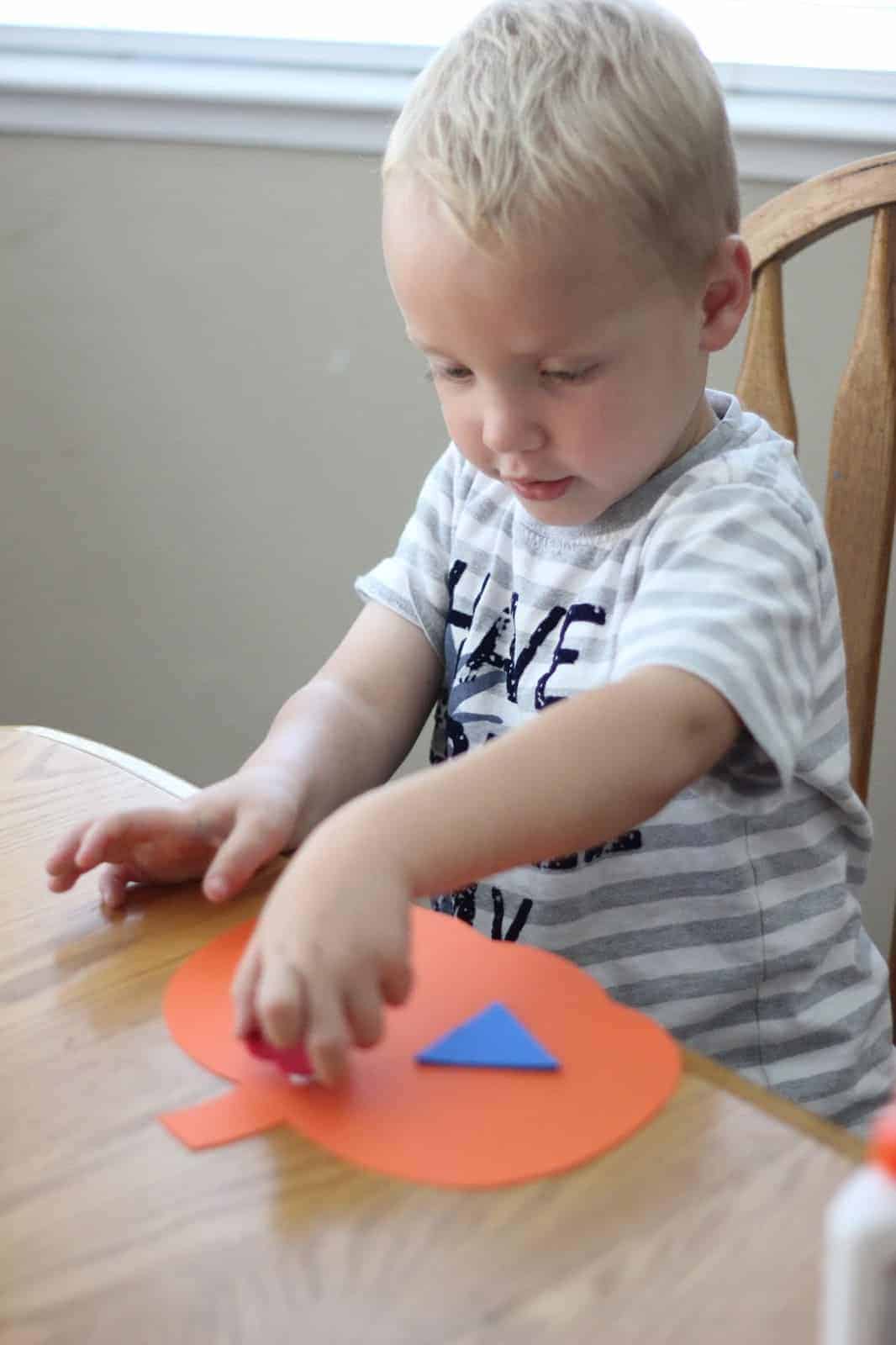 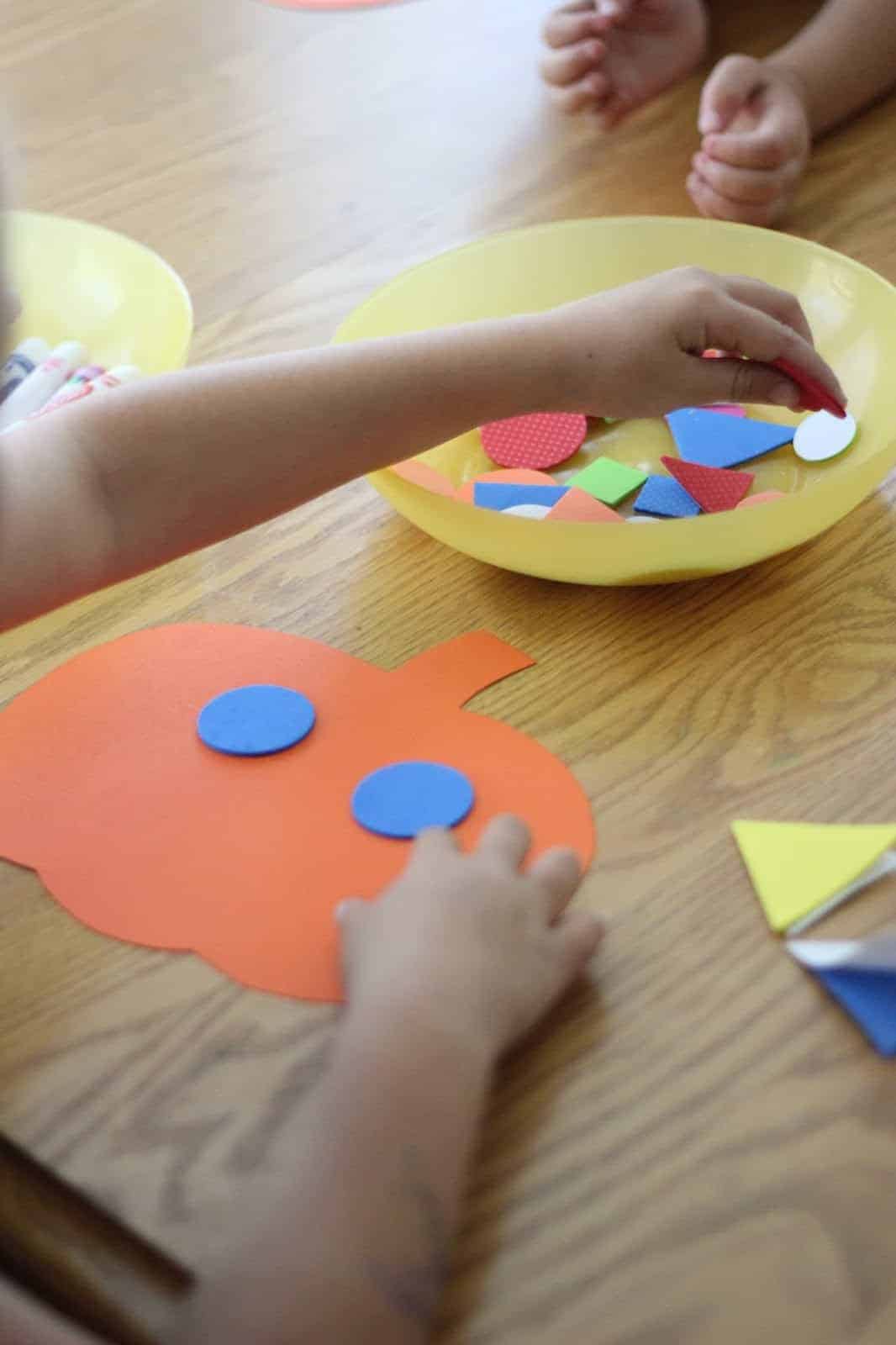 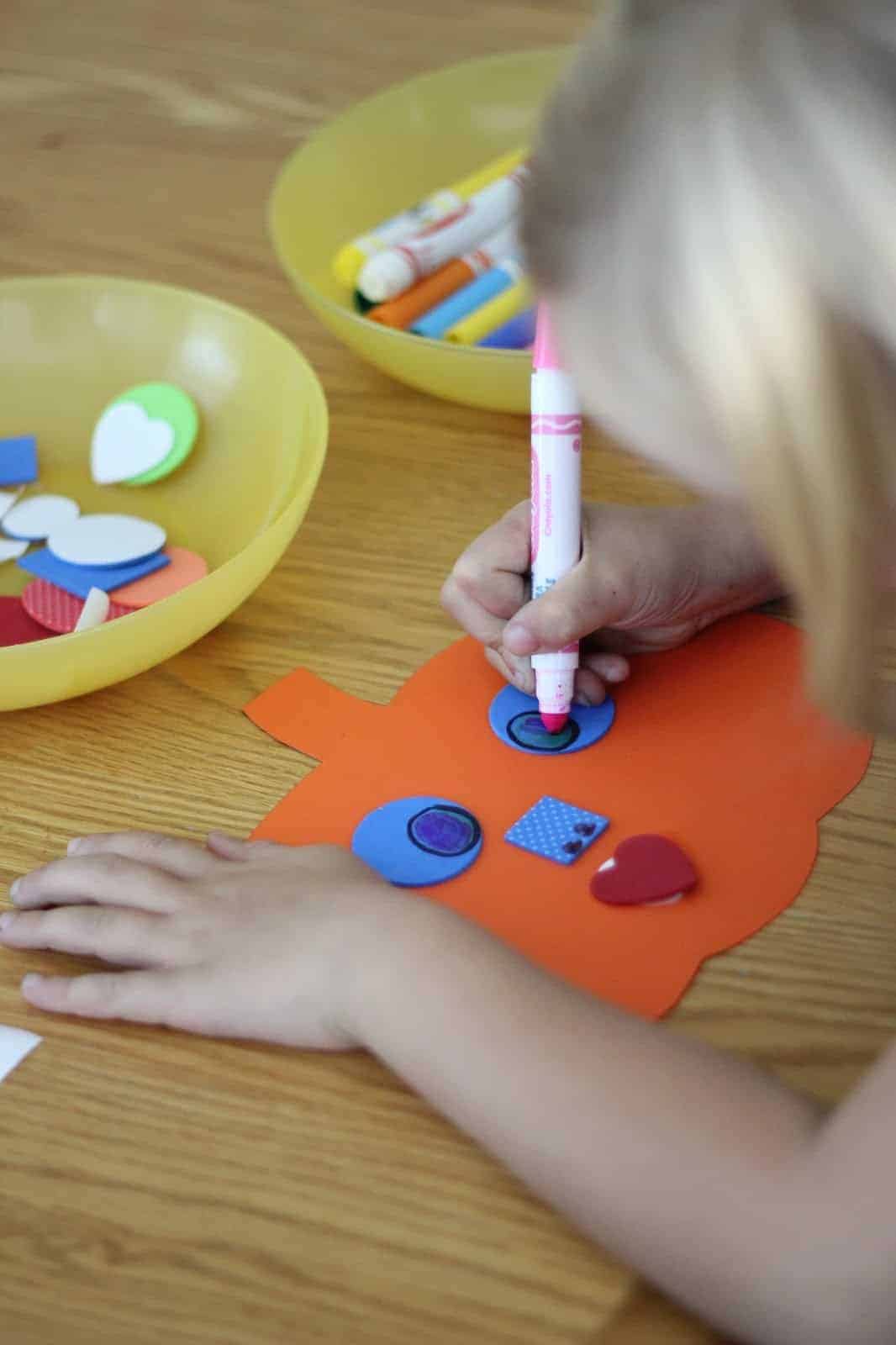 My daughter was very determined to have a pumpkin face while my son enjoyed making polka dots on his pumpkin with the markers. 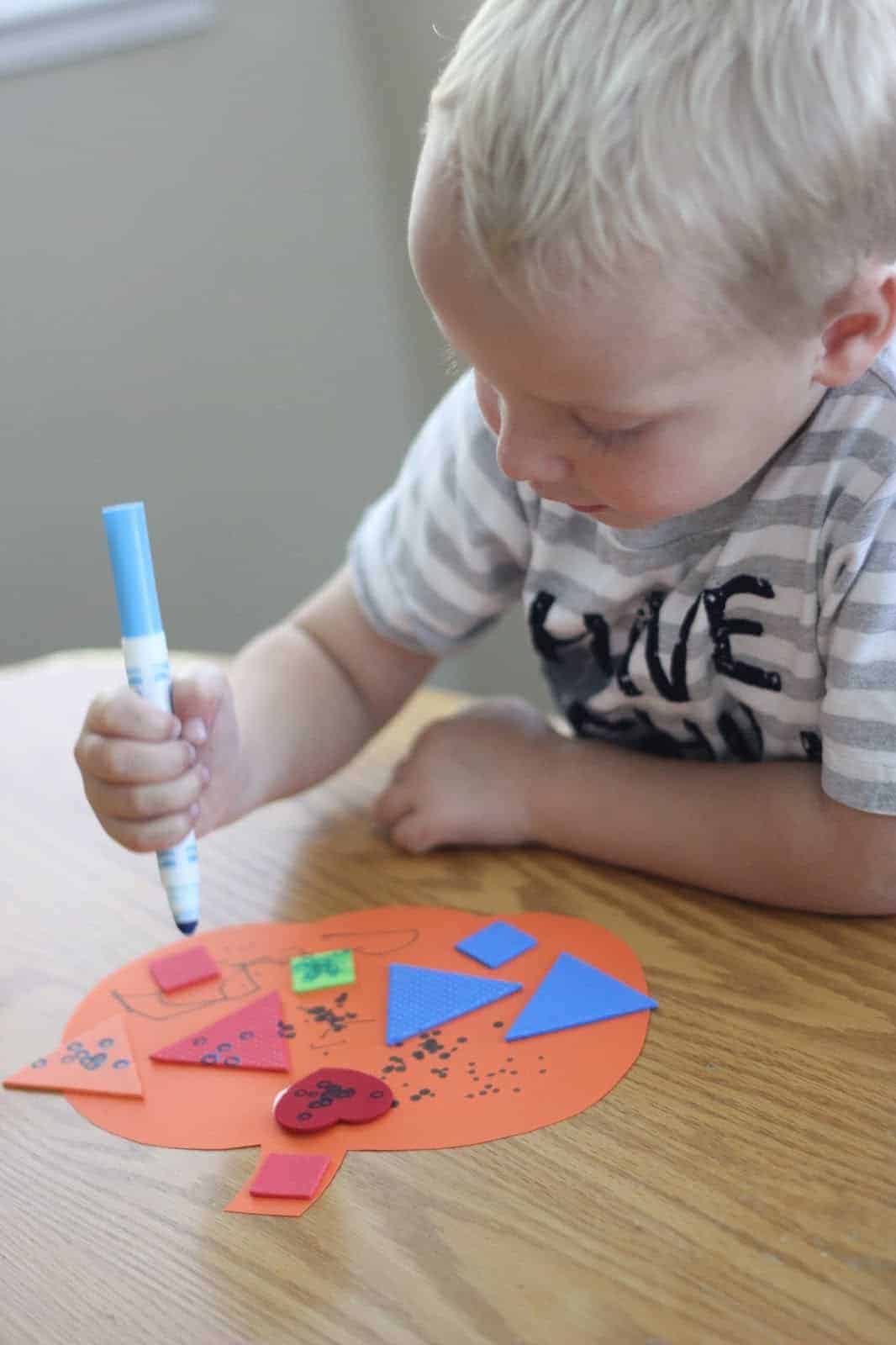 They were both really excited to show off their creations once we were done. 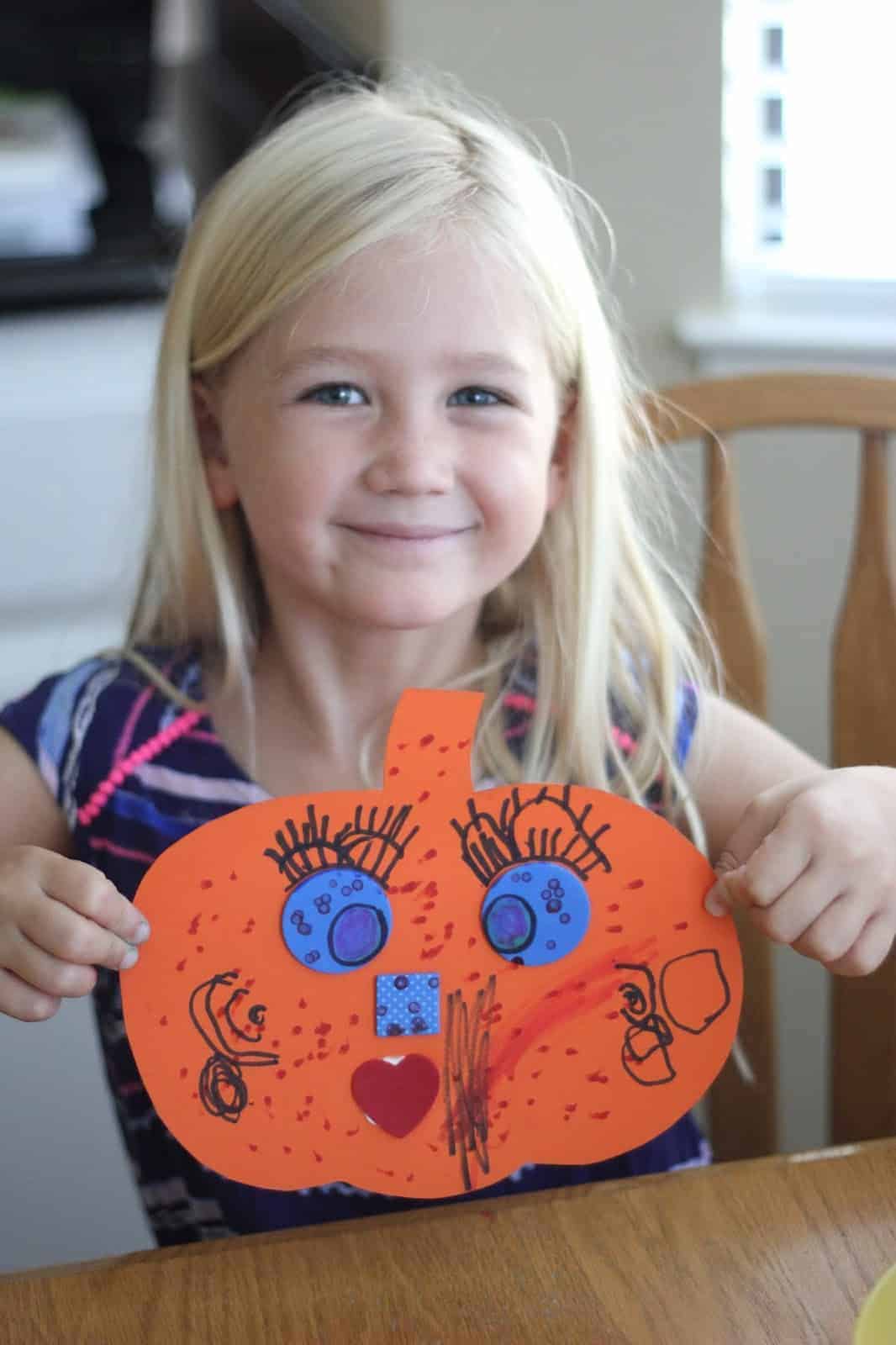 I like open-ended crafts the most because they allow for a lot of creativity! Kids also get to make their own choices without much adult intervention. 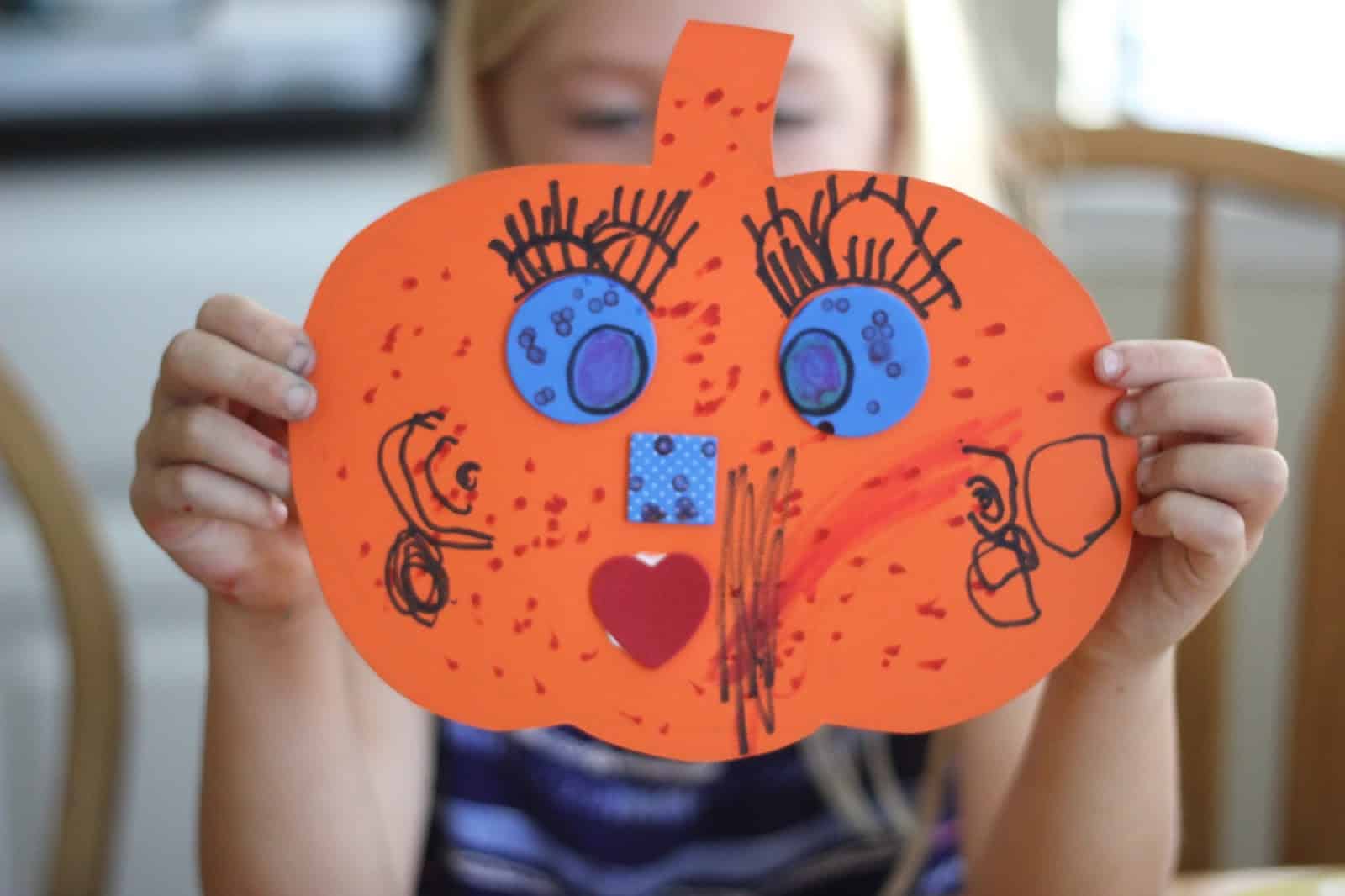 Along with making our shape pumpkins we read our featured book of the week, 5 Little Pumpkins by Dan Yaccarino. I kinda wish pumpkin week lasted for a few more weeks since we have so many activities planned that we haven't gotten to do yet! I think we'll be continuing the theme for a little bit longer!

If you want to read additional pumpkin themed books, here are a few of our favorites:

PUMPKIN THEMED BOOKS TO CHECK OUT 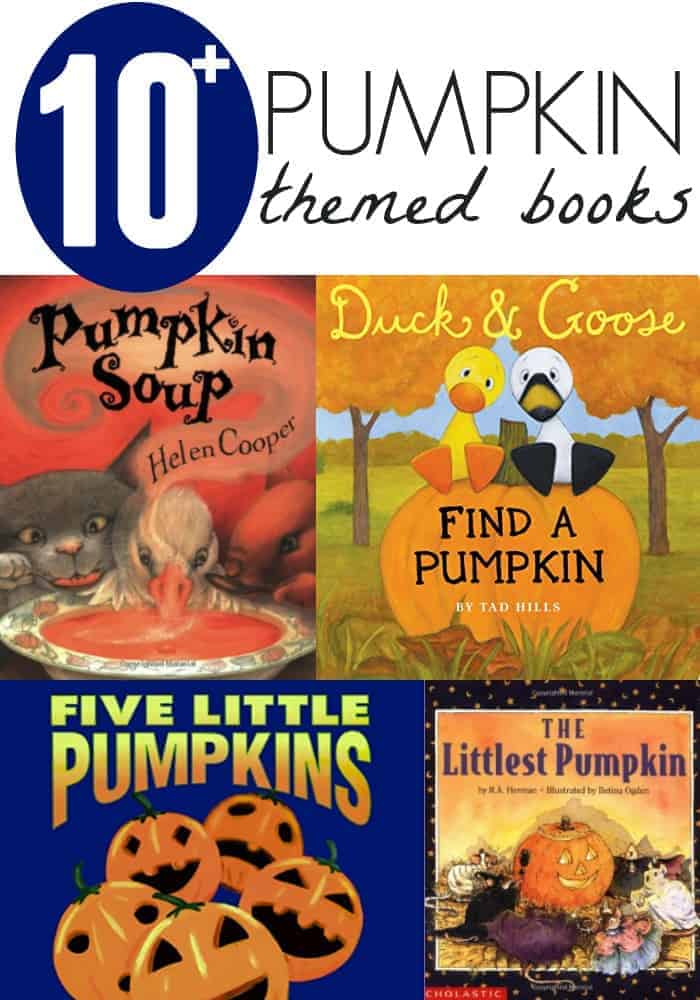 The Little Old Lady Who Was Not Afraid of Anything by Linda D. Williams
The Littlest Pumpkin by R.A. Herman
Where Is Baby's Pumpkin by Karen Katz
Plumply, Dumply Pumpkin, by Mary Serfozo
Splat the Cat and the Pumpkin Picking Plan by Catherine Hapka
Too Many Pumpkins by Linda White
The Biggest Pumpkin Ever by Steven Kroll
It's Pumpkin Time by Zoe Hall
Duck and Goose Find a Pumpkin by Tad Hills
Pumpkin Soup by Helen Cooper 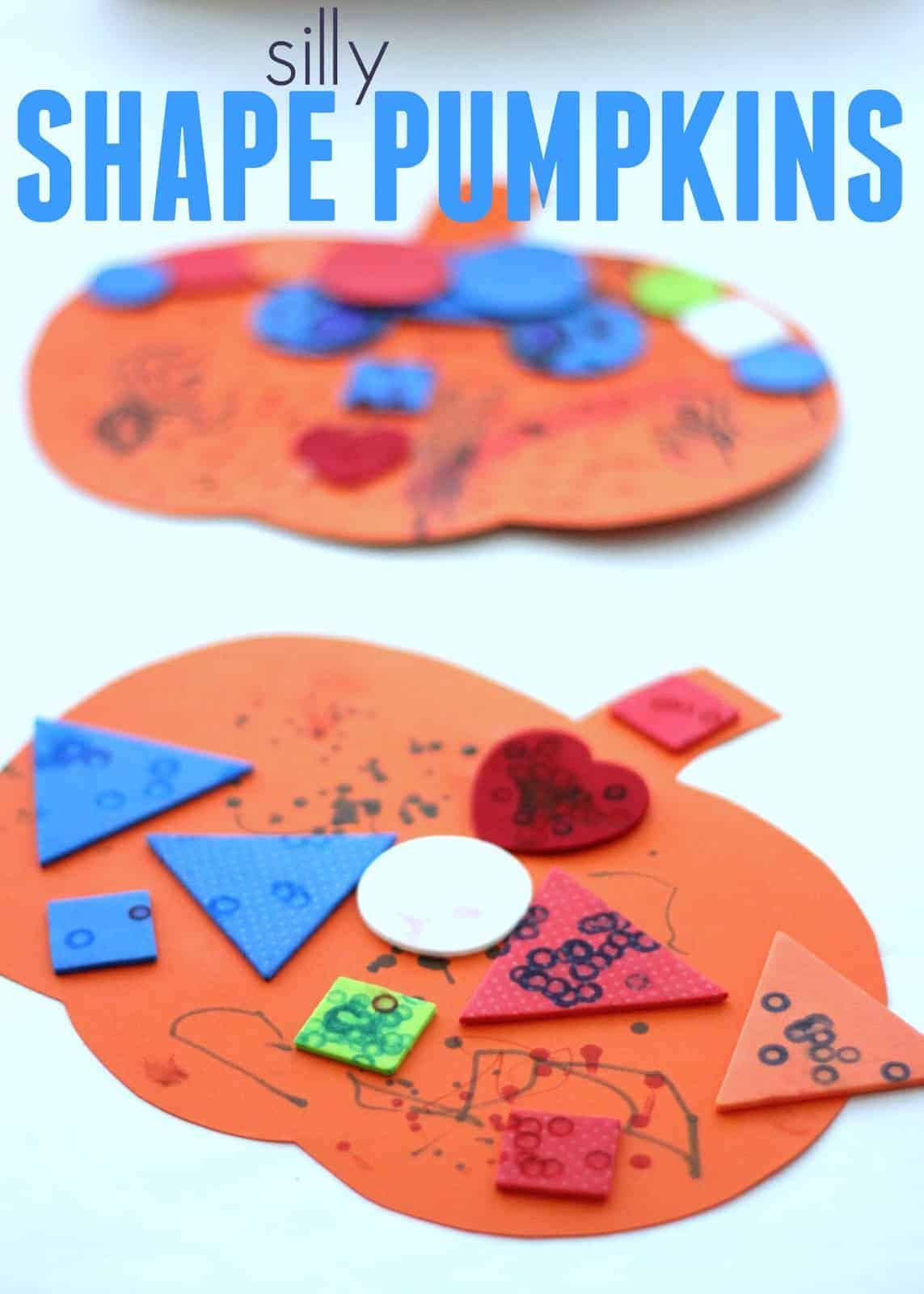 If you want additional fun pumpkin crafts and activities to try, head on our to my main PUMPKIN WEEK page for ideas.