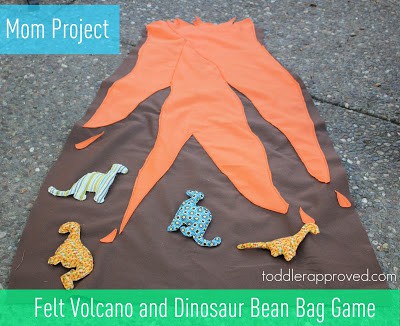 If you have a volcano or dinosaur lover at your house, this project is for you!

When my co-blogger EJ flew into the Bay area a few weekends ago, we started brainstorming all of the projects we wanted to create. She showed me this adorable volcano game mat from Green Planet Parties and I knew we needed to make one right away! The jumbo volcano mat created by Suzanne was a genius idea to make kid's birthday parties greener and serve as a game to play all year long.

I don't really have specific measurements for you, cause we just kind of winged it... but I'll try to share a few bits of info.

Materials Needed (for the volcano): 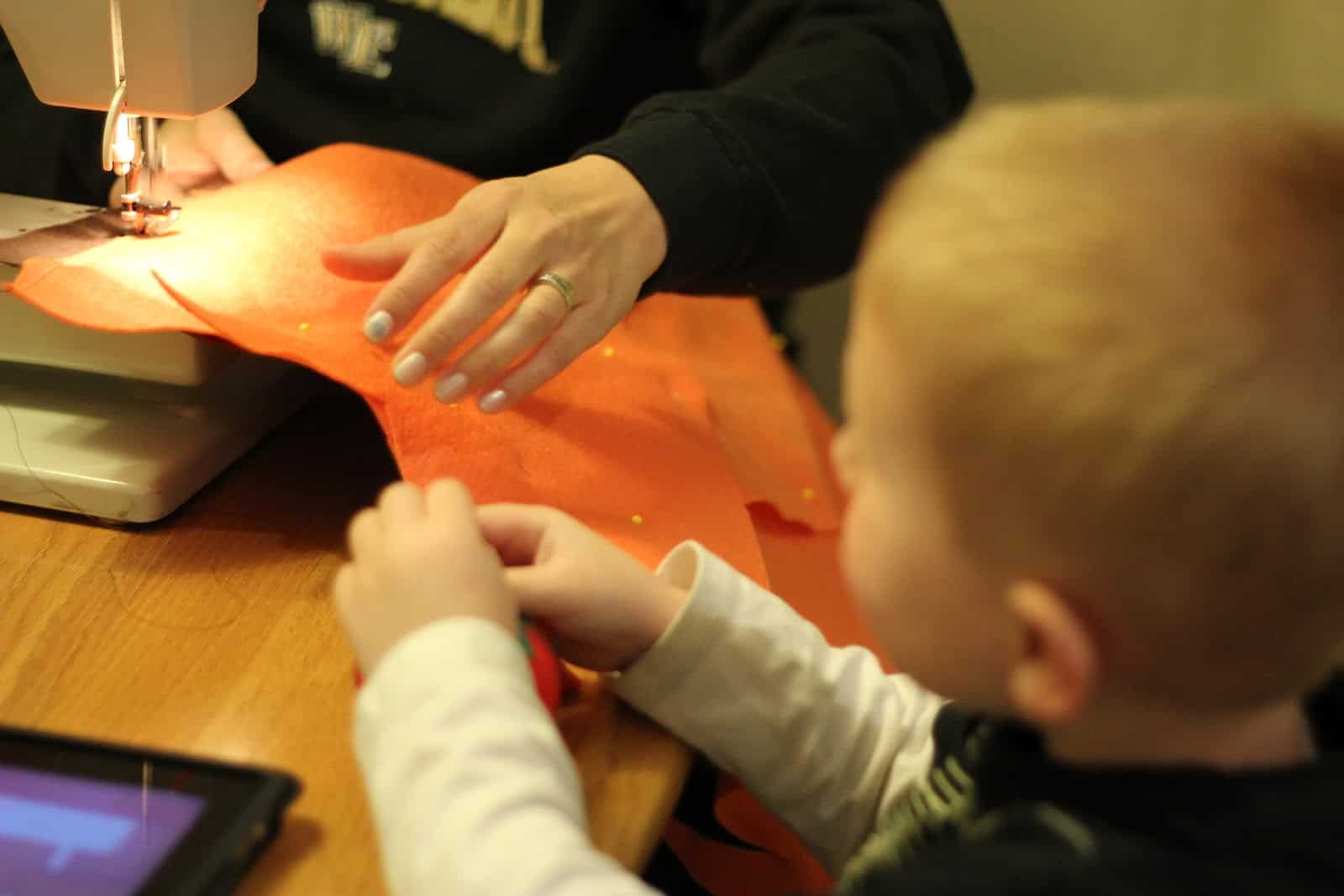 Directions (for volcano)- made by EJ:

Can you feel his excitement? 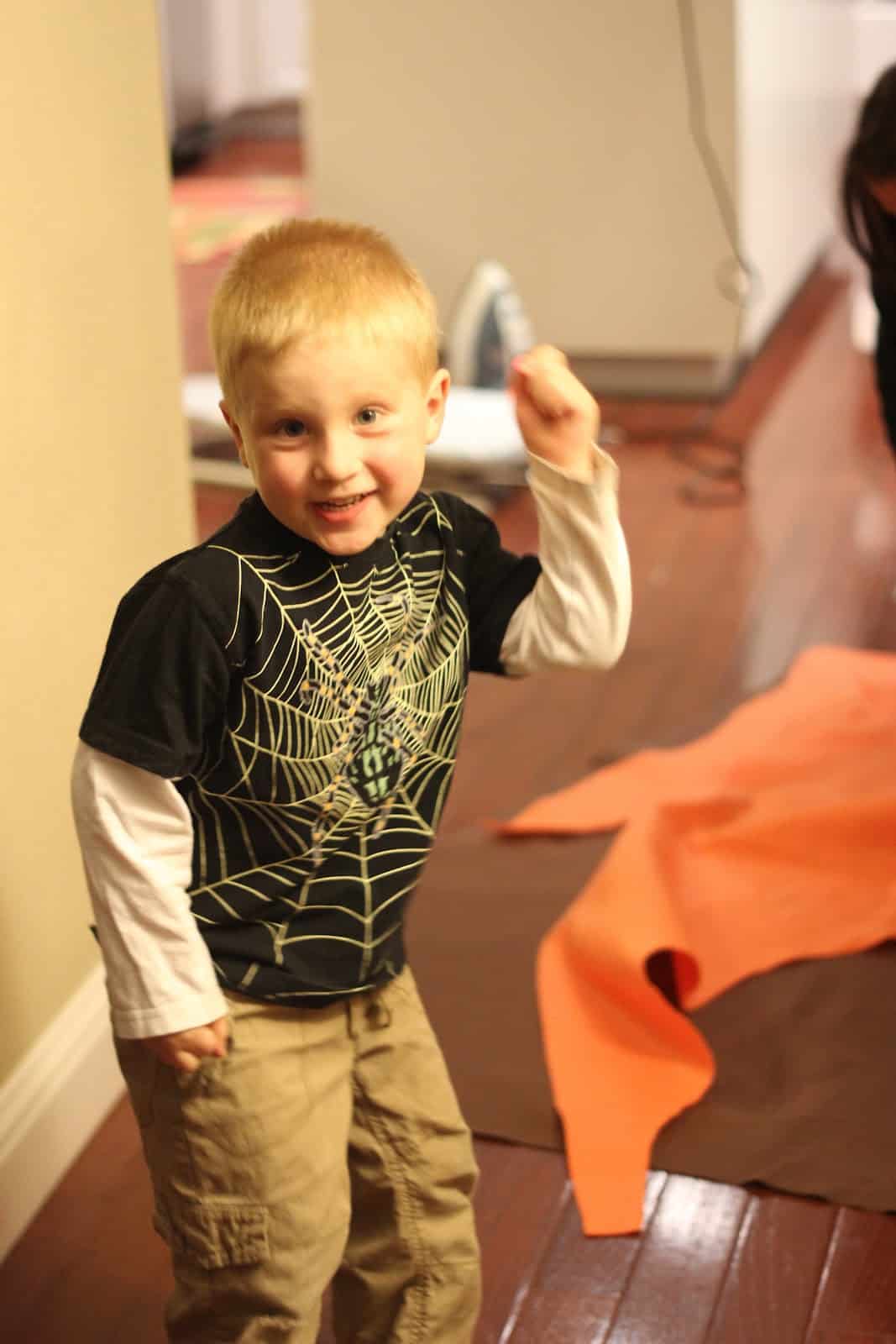 EJ had him be in charge of putting the pins back in after we used them.

He did an awesome job. 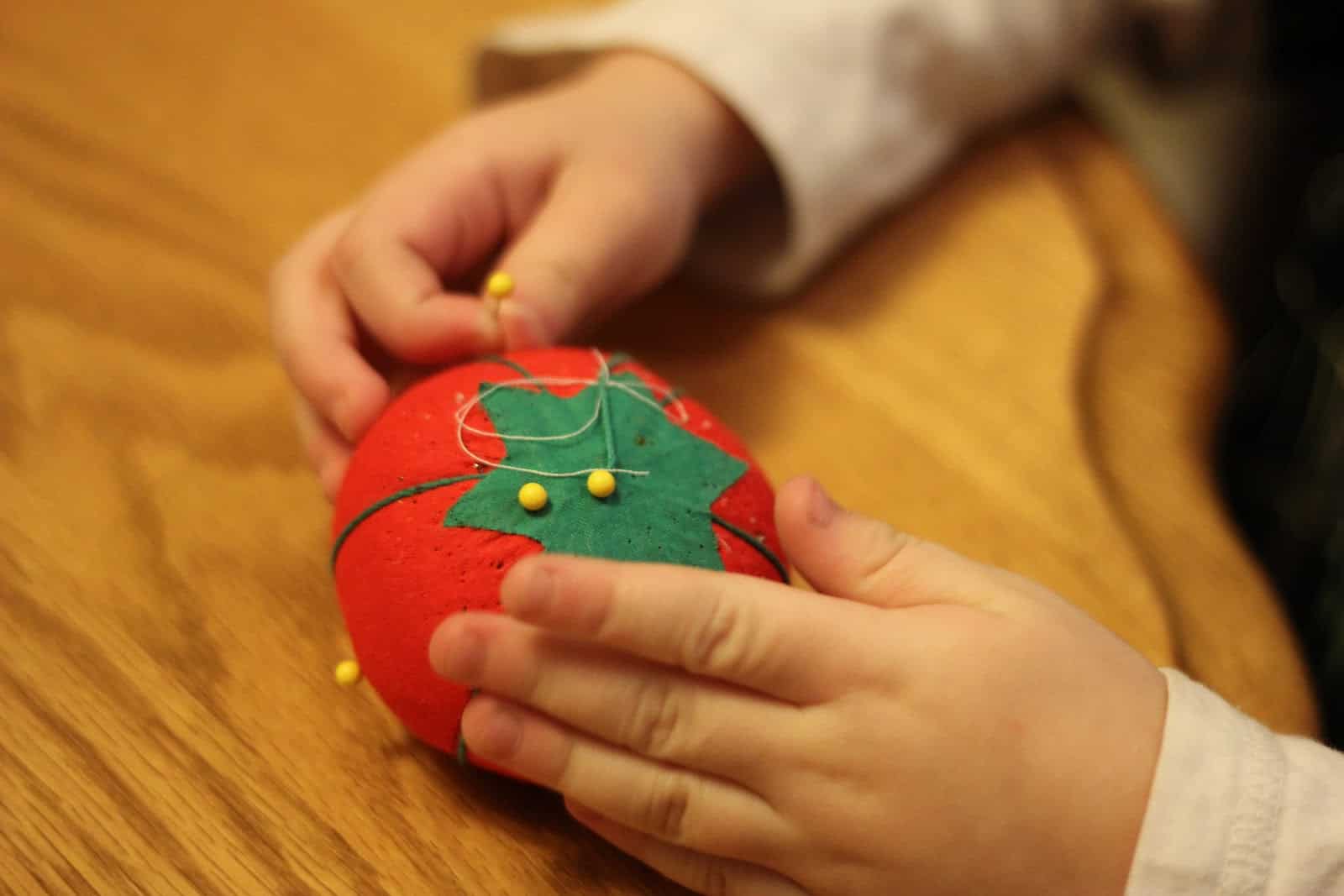 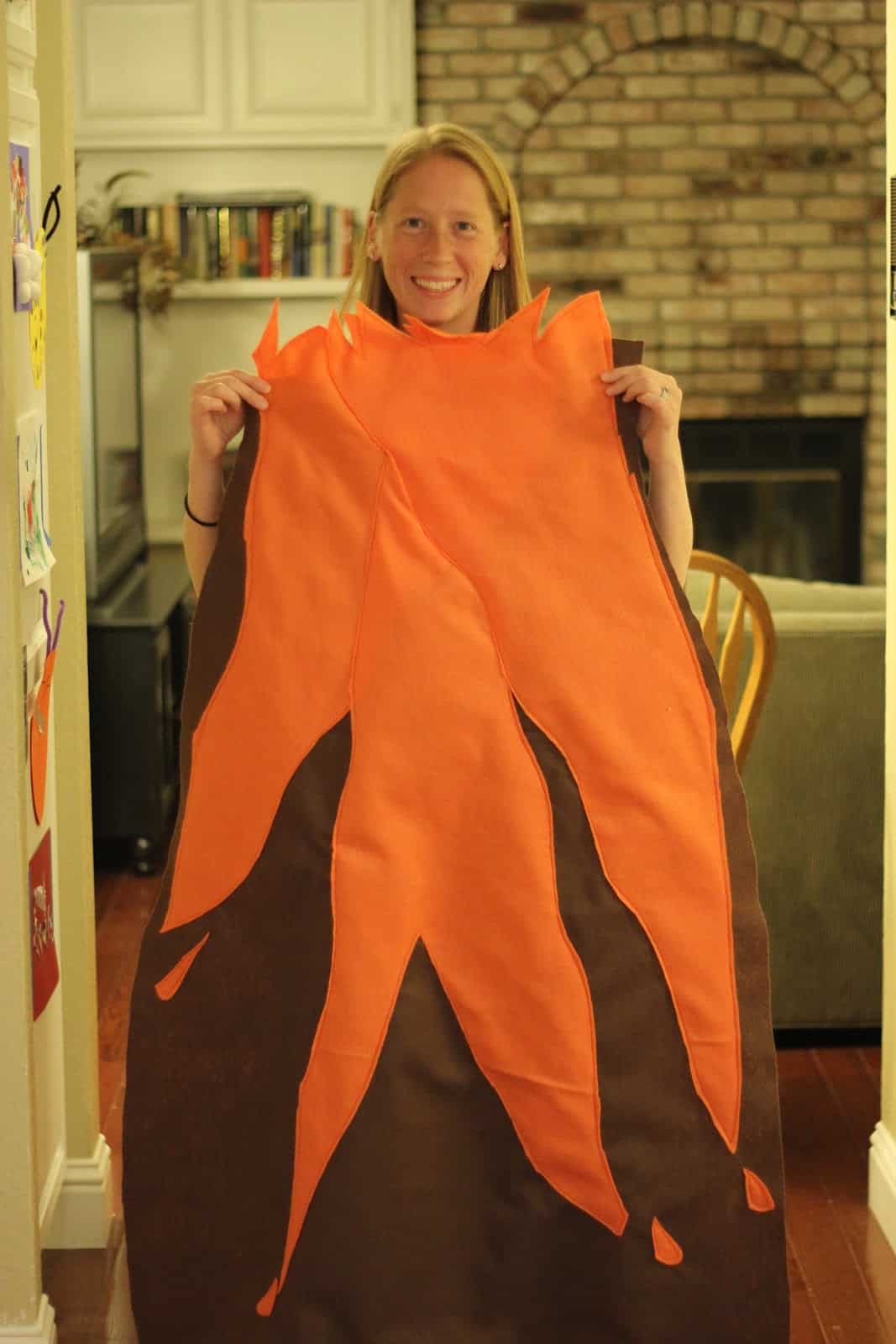 Directions (for dinosaur bean bags)- made by me: 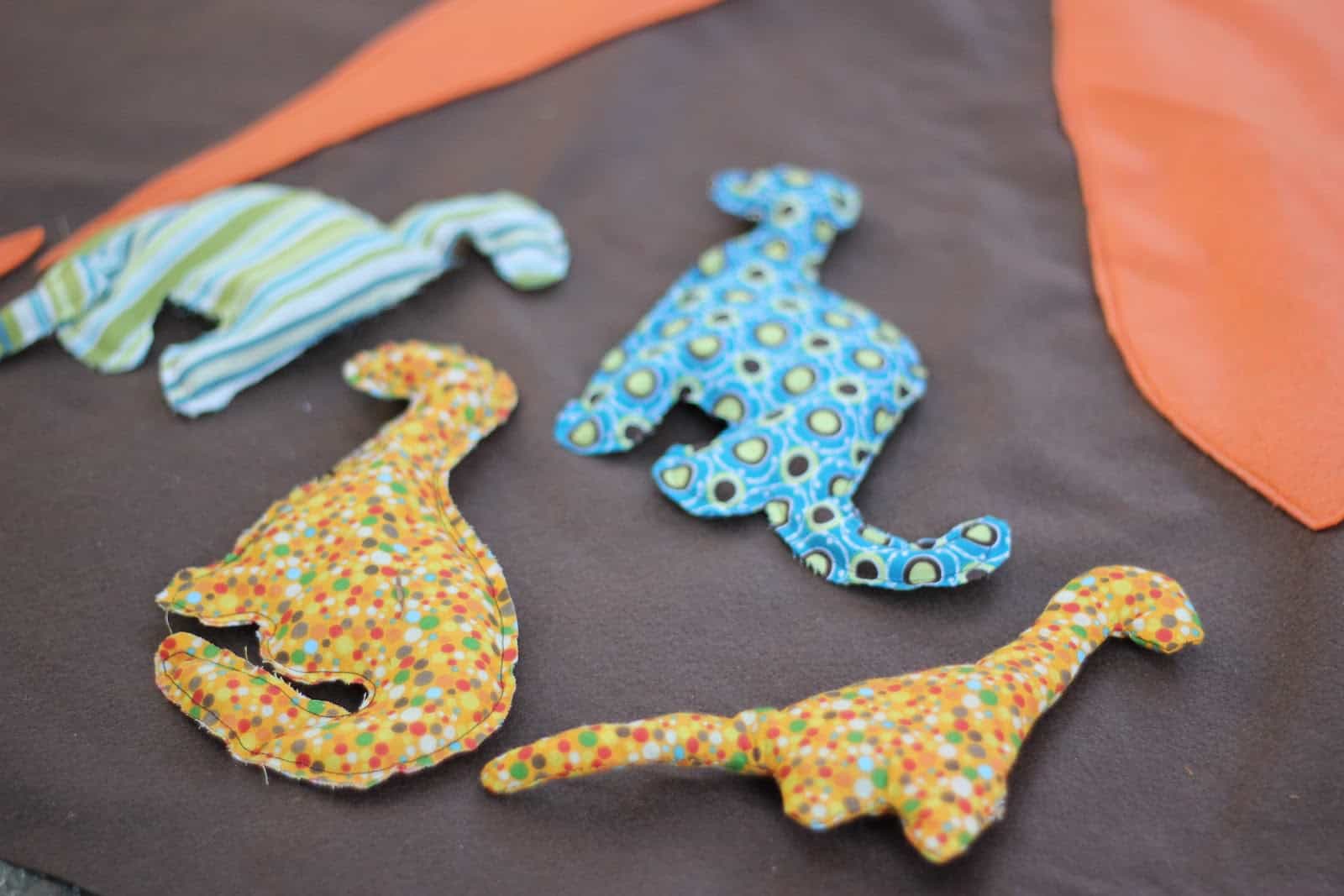 * Some of my dinosaur bean bags look weirder than others because I kept tweaking my pattern until I liked it. The blue dinosaur in the middle is my favorite.

How to Play the Volcano Game:

Use your creativity. I'm sure there are tons of games that you can make up to use with this volcano mat. Here are a few ideas...

- Don't touch the lava!- We tried to throw the dinosaurs onto the mat so that they didn't hit the lava. This was tricky for the preschooler and worked on hand-eye coordinate and aim.

- Lava Letters- Cut out some extra alphabet letters from your orange felt remnants. Put them all over the volcano and have your child try to throw the bean bags to land on letters. With older kids you could have them throw the beanbags on the letters to try and spell different words. You could do the same thing with numbers.

- Throw the Dinosaur on the Volcano- Kind of like "pin the tail on the donkey," but volcano style. Blind fold kids or just have them stand further away from the mat and then have them try to make the dinosaurs land on the volcano.

- Pretend play with dinosaurs- Just let your child play with the dinosaurs and explore the volcano together making up your own dinosaur/volcano pretend play activity.

What else would you do with this volcano mat?

Do you have any kids at your house that love volcanoes?

What are some of your other favorite volcano/dinosaur themed activities?