We love dumping at our house! My son loves to dump his tubs of Legos out everywhere and my daughter loves to dump her toys out of all the baskets. So... we came up with a dumping name, animal, and shape game earlier today. The three different versions of the game make this work for little babies as well as older toddlers and preschoolers. 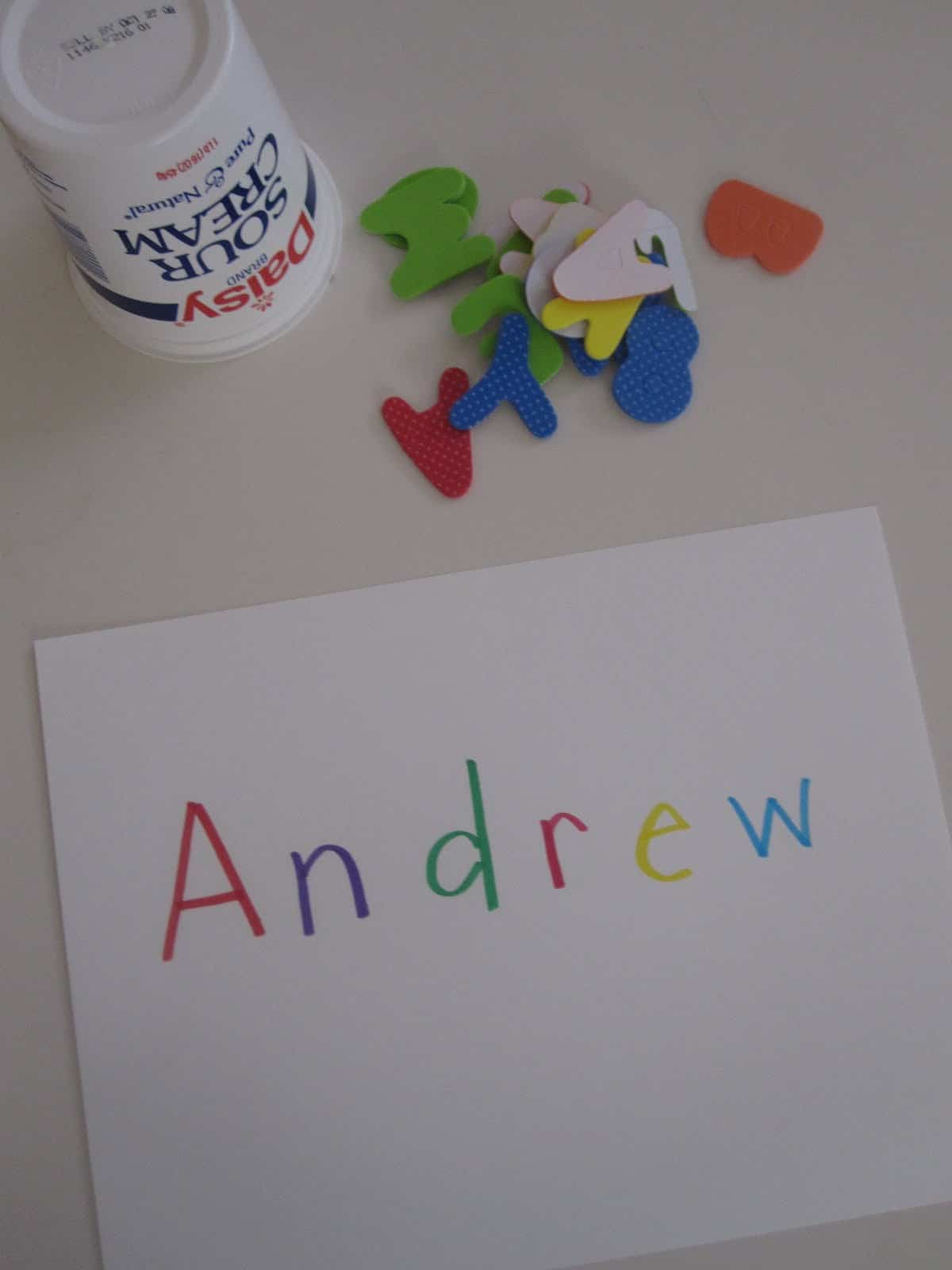 Materials Needed: some sort of container to use for dumping, foam alphabet letters and foam shapes, toy animals/objects, markers, and a blank piece of paper.

1. Sort through letters and find all of the letters in your child's name. If you have uppercase and lowercase letters, that works the best. I don't 🙂

2. Put all of the letters from your child's name in a cup and then add in a few numbers and other letters that are not in their name.

3. Write child's name on a piece of paper. 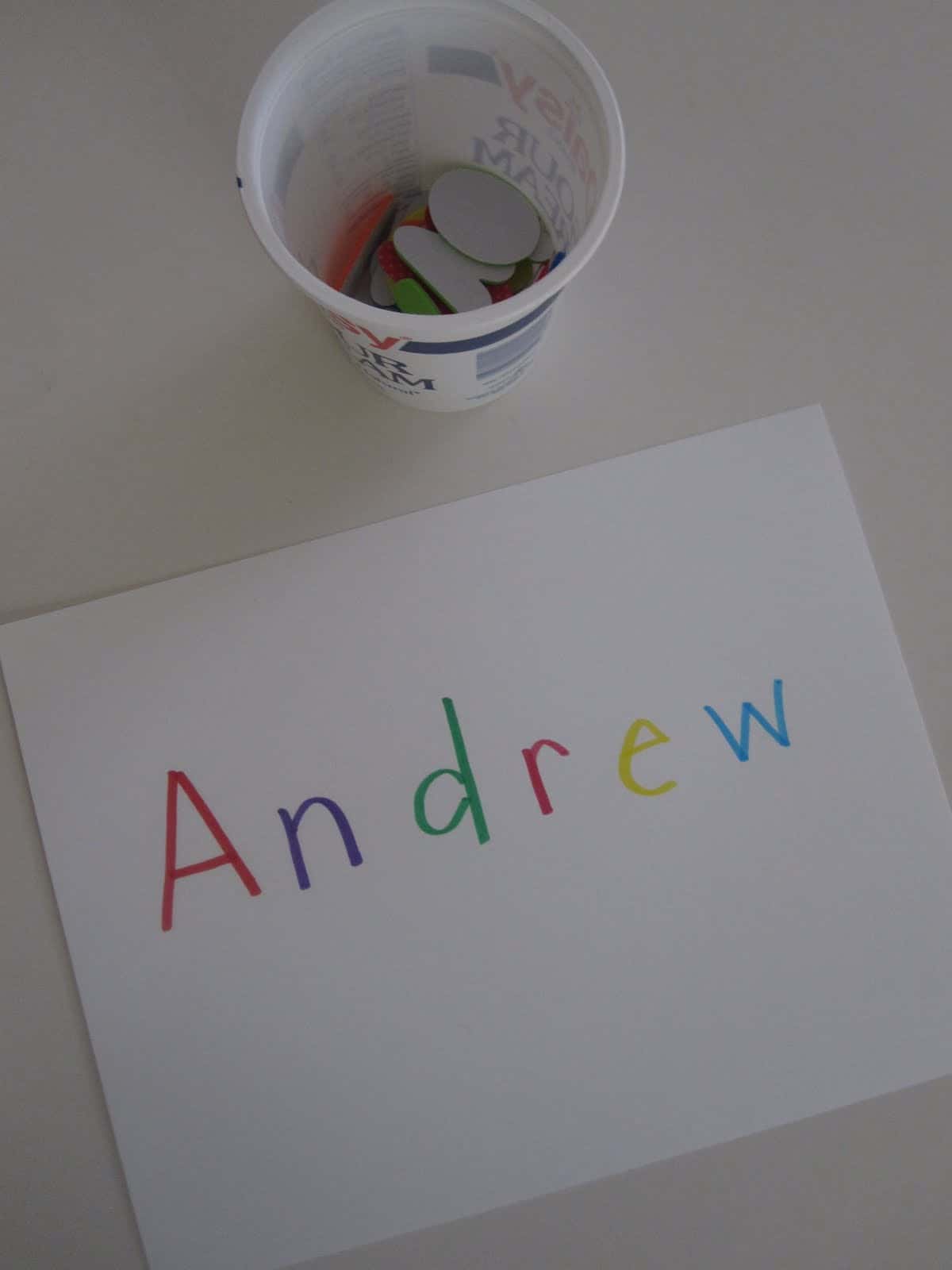 4. Dump the letters onto the floor or your table! We liked to be very dramatic with our dumping. So dramatic that I couldn't get a clear picture...

5. Have your child start sorting/hunting for the letters in his name. We didn't stick these on, we just sorted with them and reused them again and again. I stuck non-letters in the cup to help my son work on some visual discrimination and distinguish between letters and numbers. 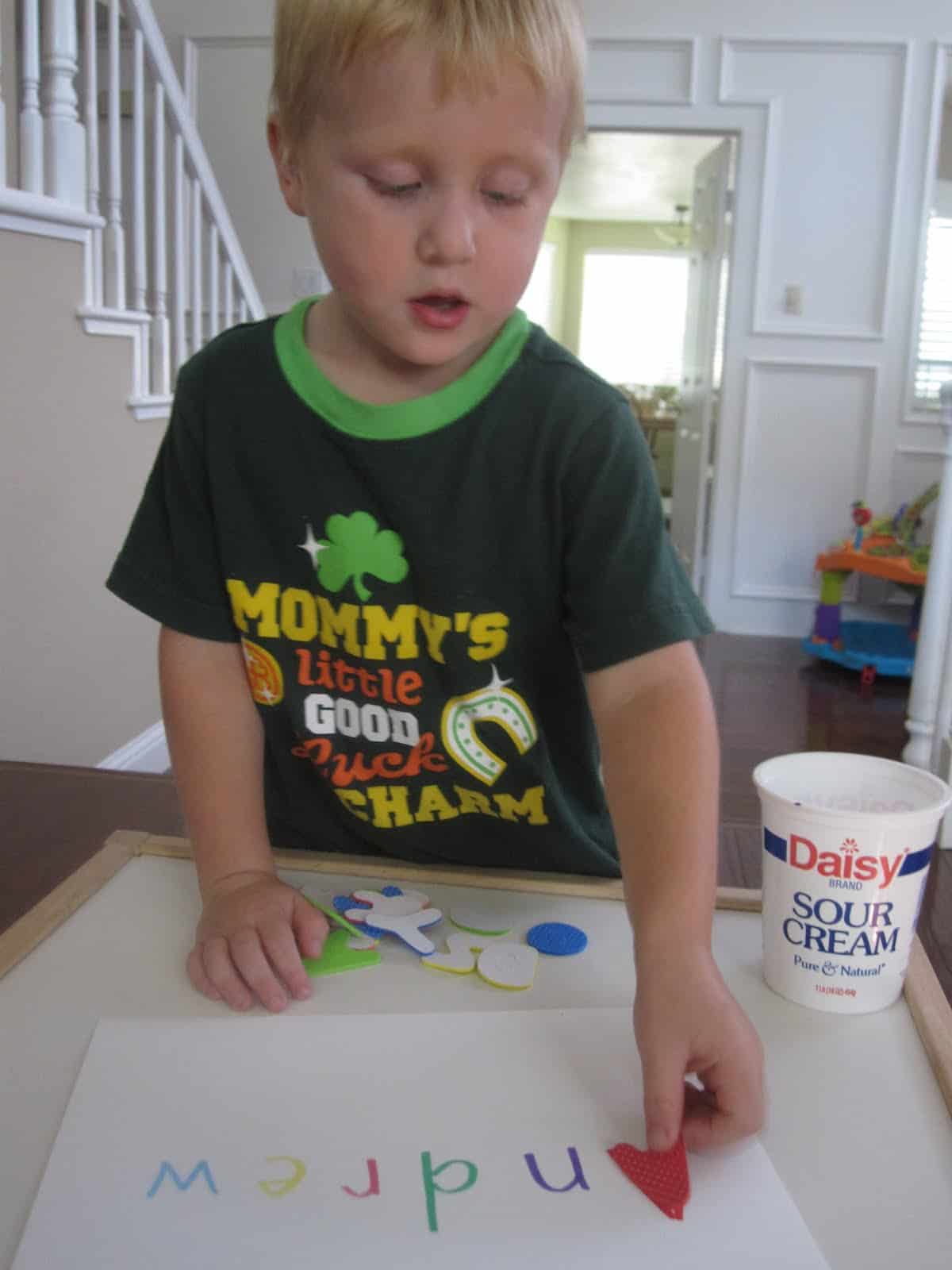 We talked about upper and lowercase letters and tried to match the correct uppercase foam letters with the lowercase written letters. 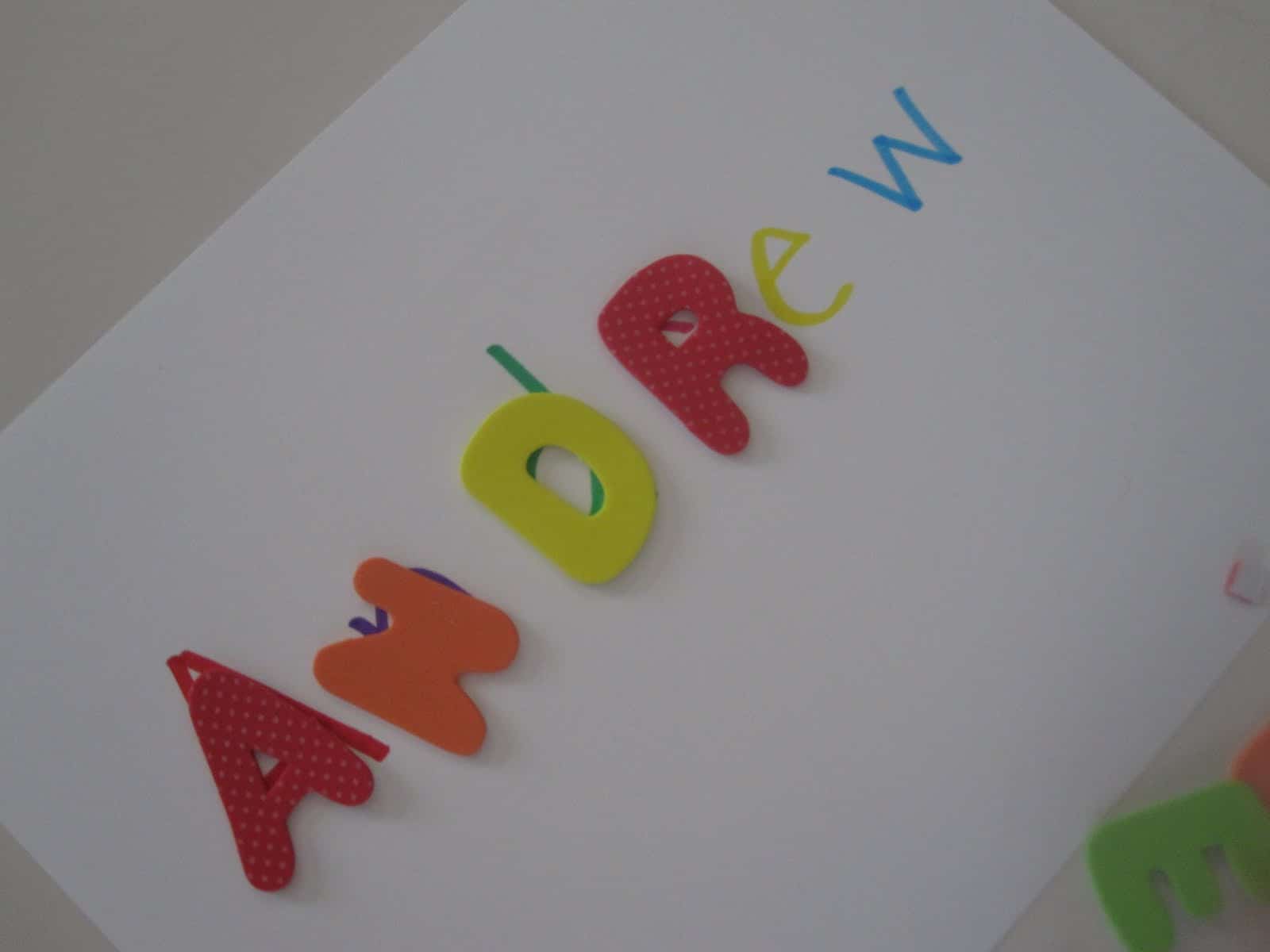 We also talked about the sounds the letters make and the direction we write names in English (left to right). 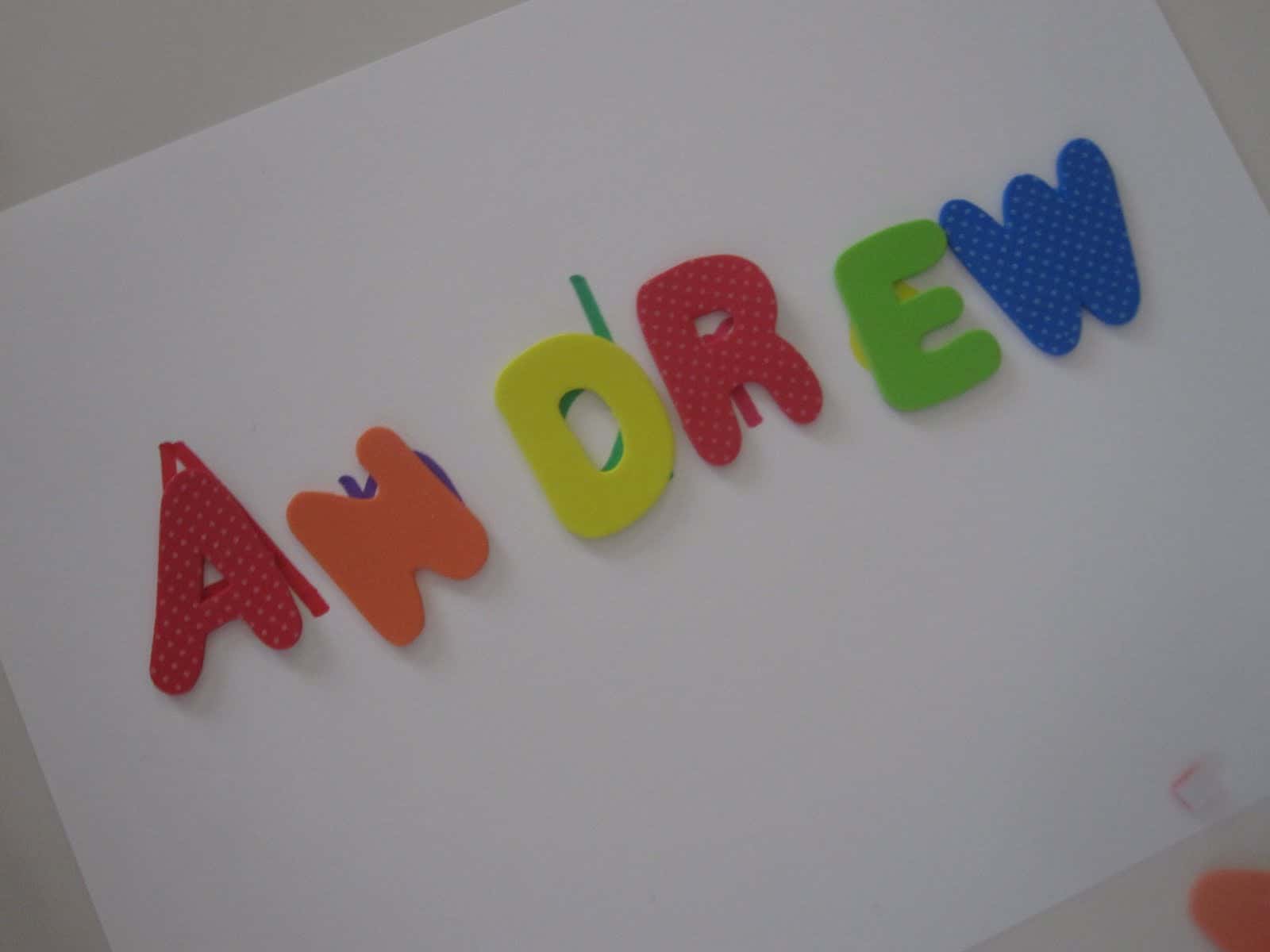 For the shape version, we used shape stickers.

1. First I drew three shapes onto a piece of paper. 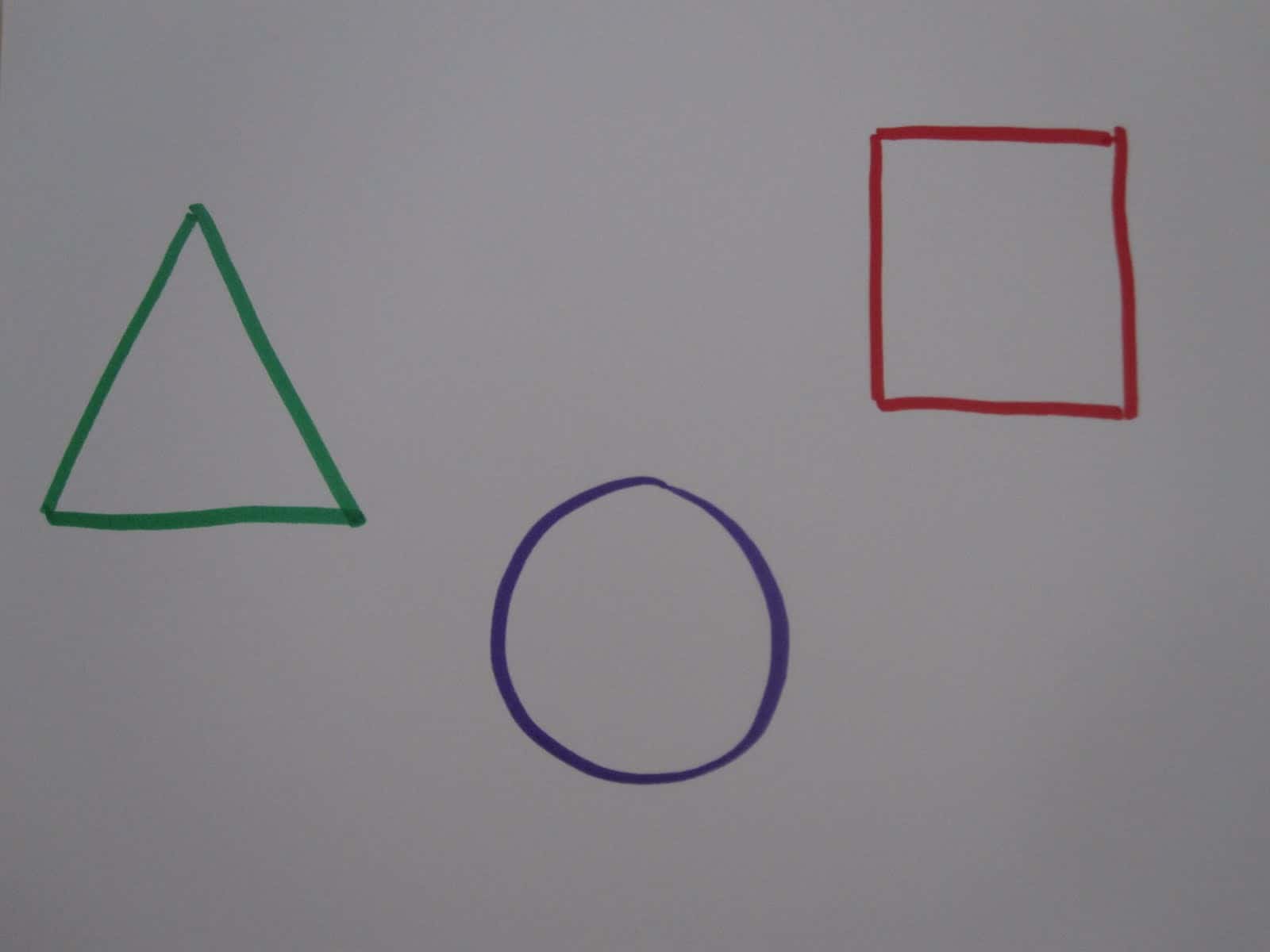 2. Then I dropped a bunch of shapes into a cup. 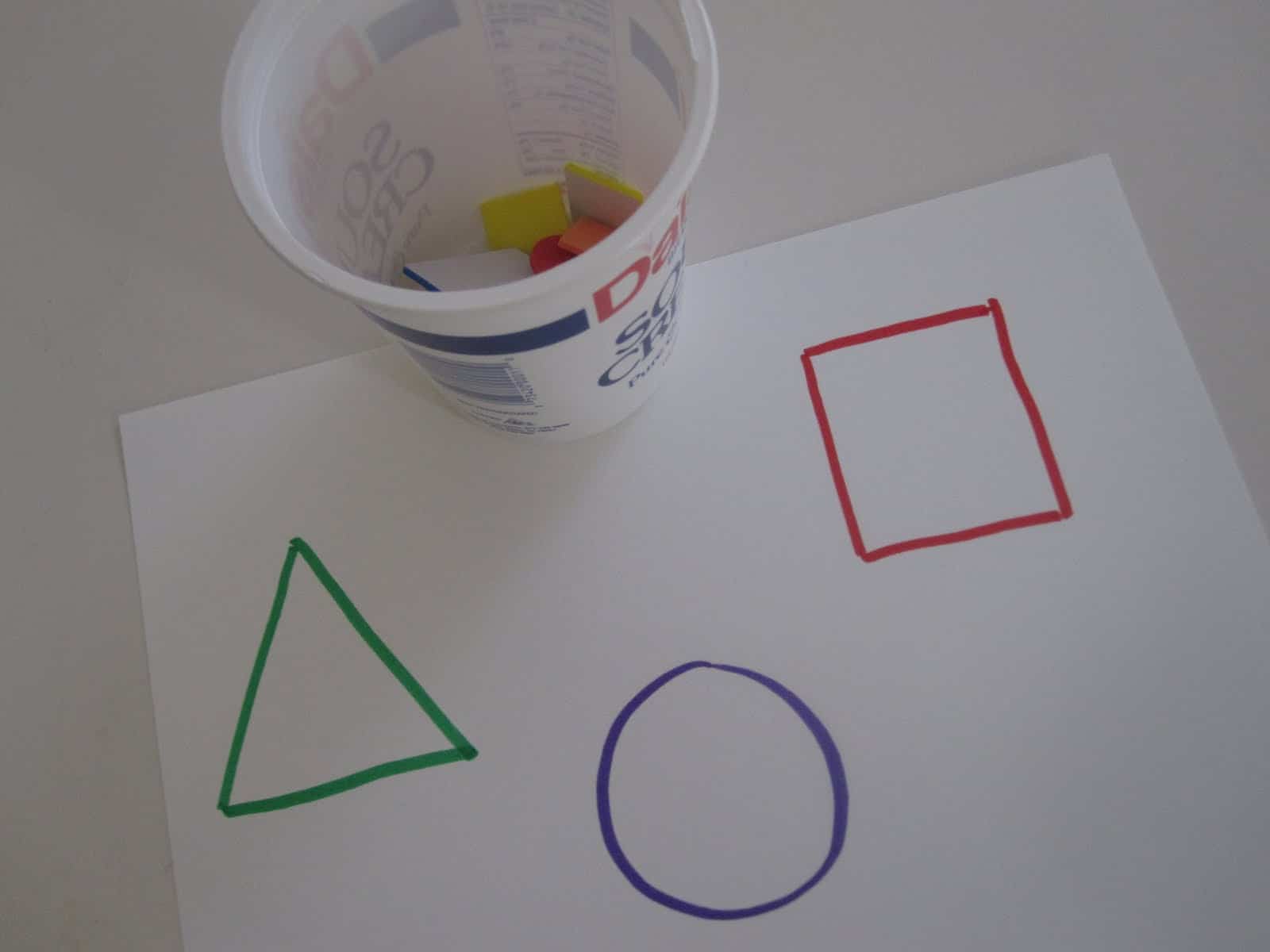 3. Then our dumper dumped them everywhere! 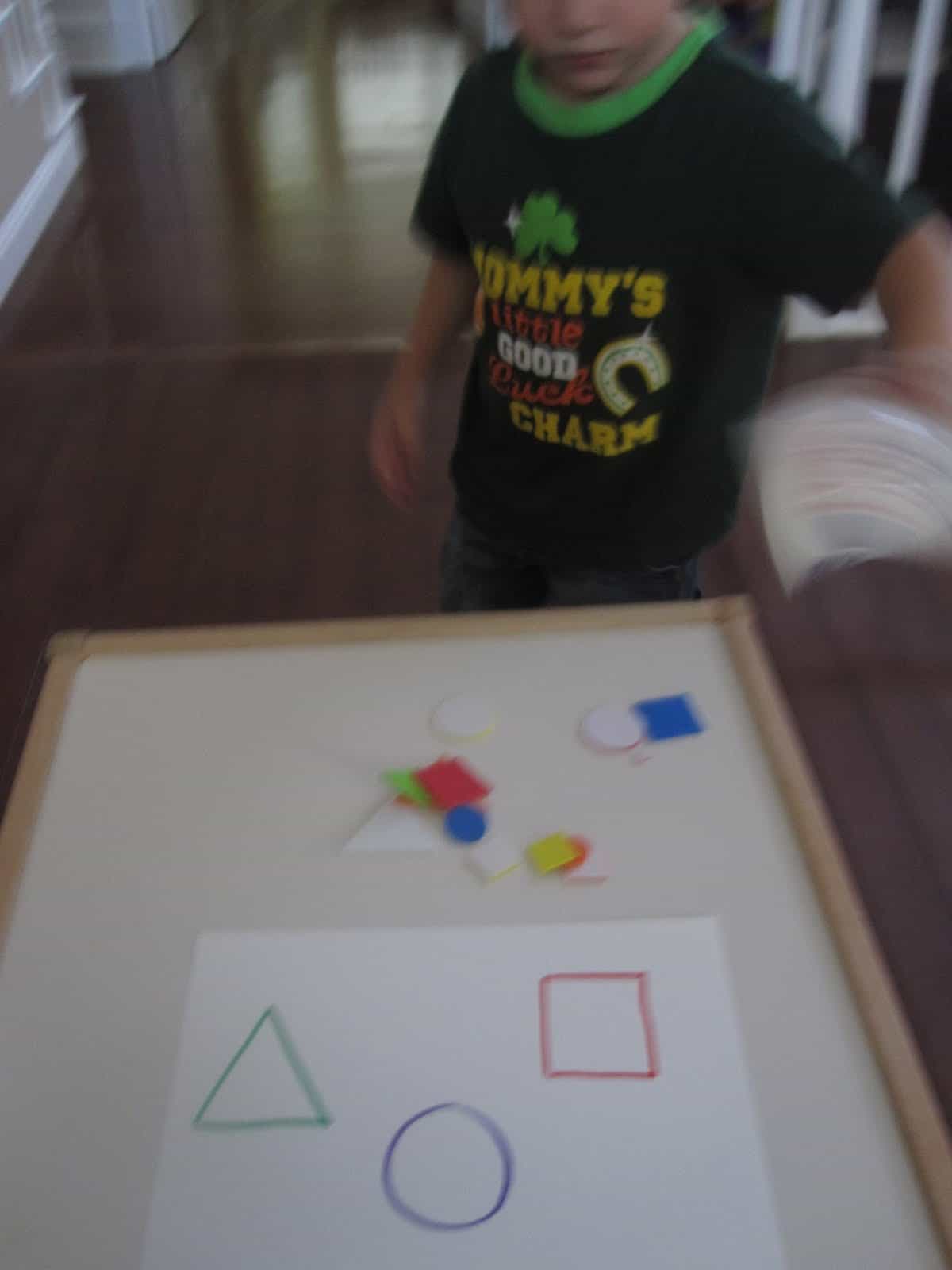 4. Next he sorted them into piles based on their shapes. 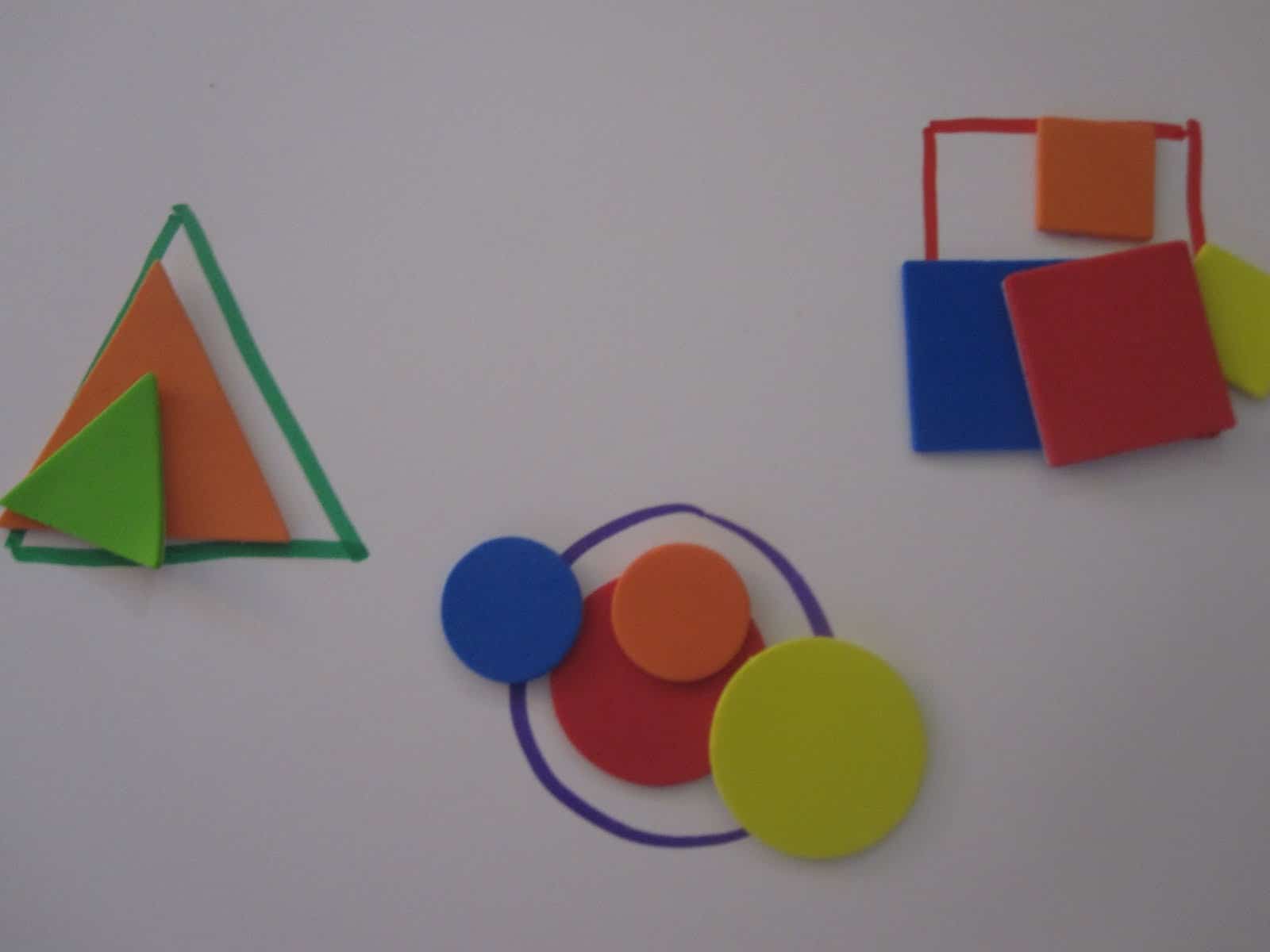 I also talked with him about sizes and colors and showed him how we can stack the shapes by their sizes. He thought it looked cool since they were kind of like little mini shape towers. 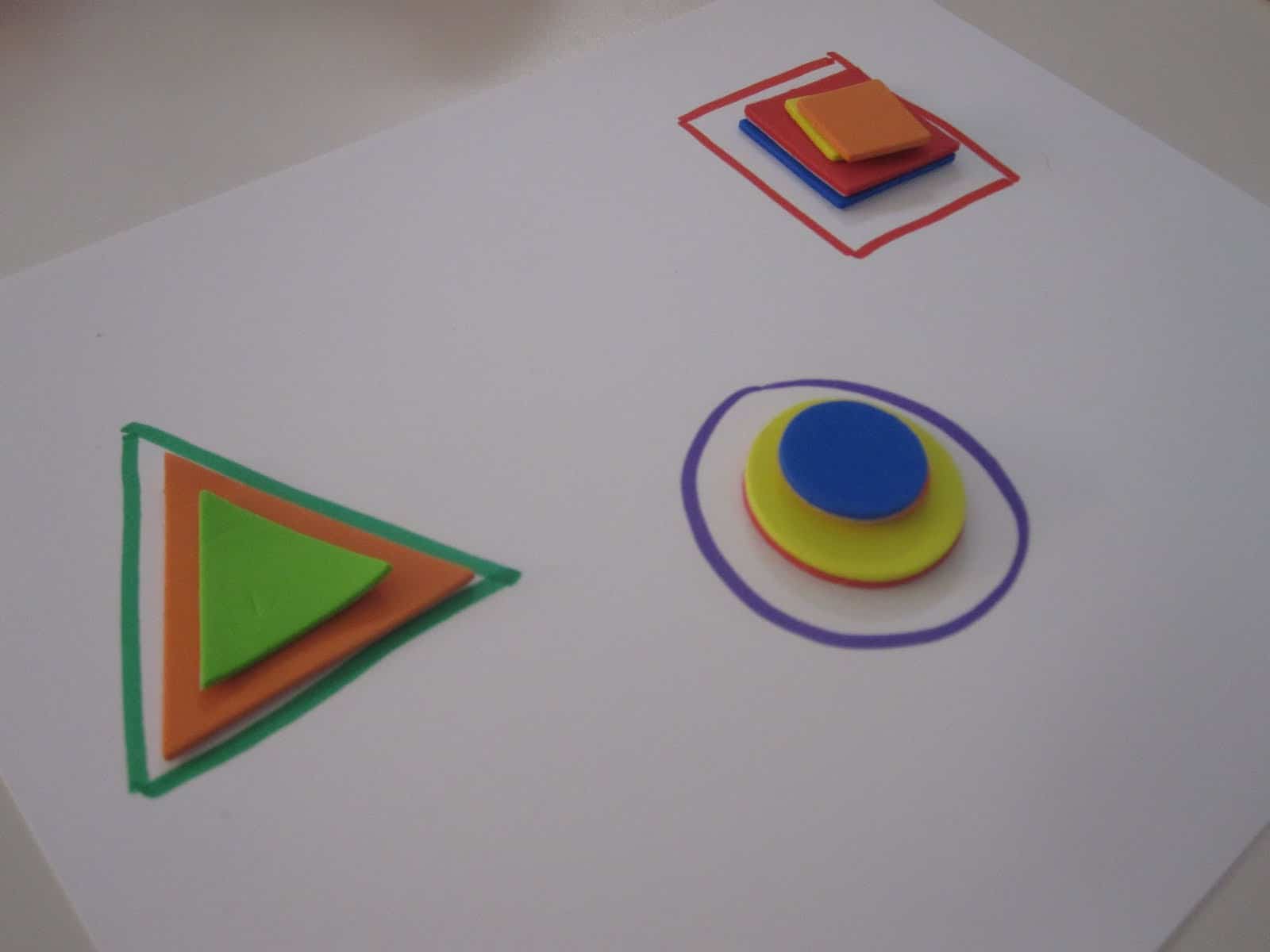 Our last version was for my 9 month old who LOVES dumping EVERYTHING... especially if it belongs to her brother!

1. I stuck several Little People animals in an open tupperware container for her. Any baby toy that isn't too small to be choked on works great for this. 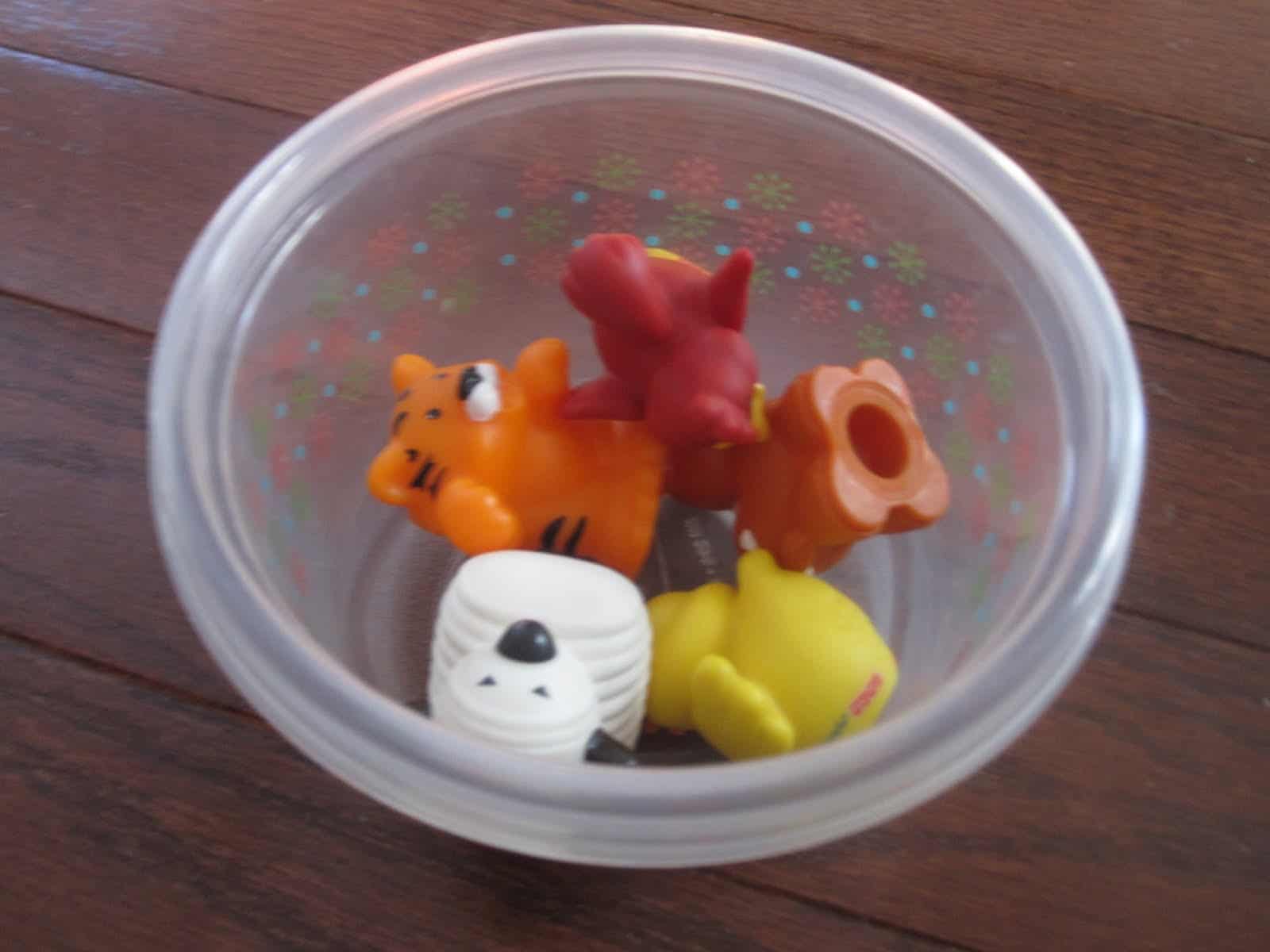 2. She explored... and chewed a little bit 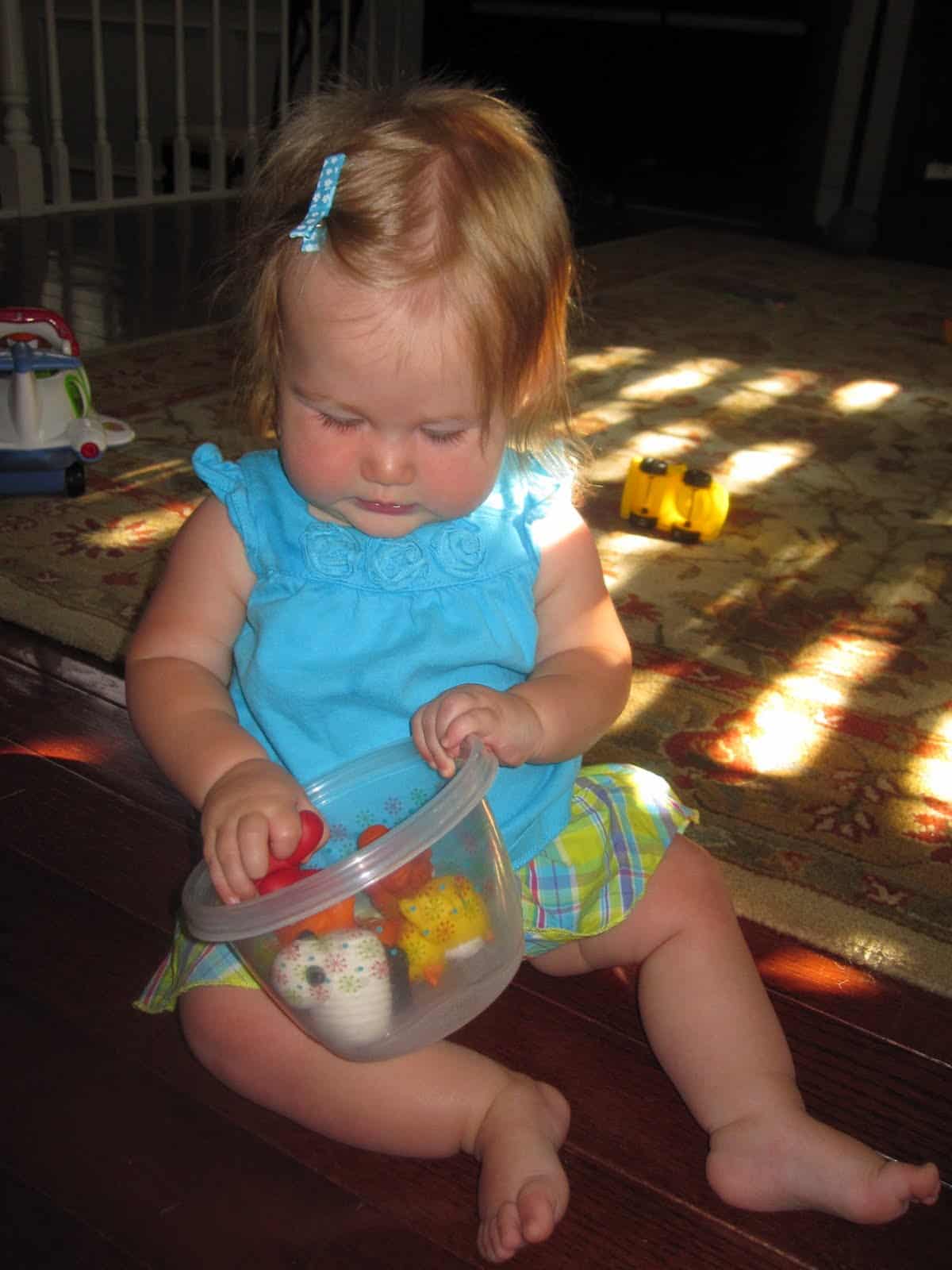 3. Big brother also had to explore with her since they are "his" toys (or so he thinks)

4. Then she dumped them out and threw them everywhere.

5. We helped gather them and handed them back to her one by one. When we handed each one to her, we told her the animal name and the sound that it made. 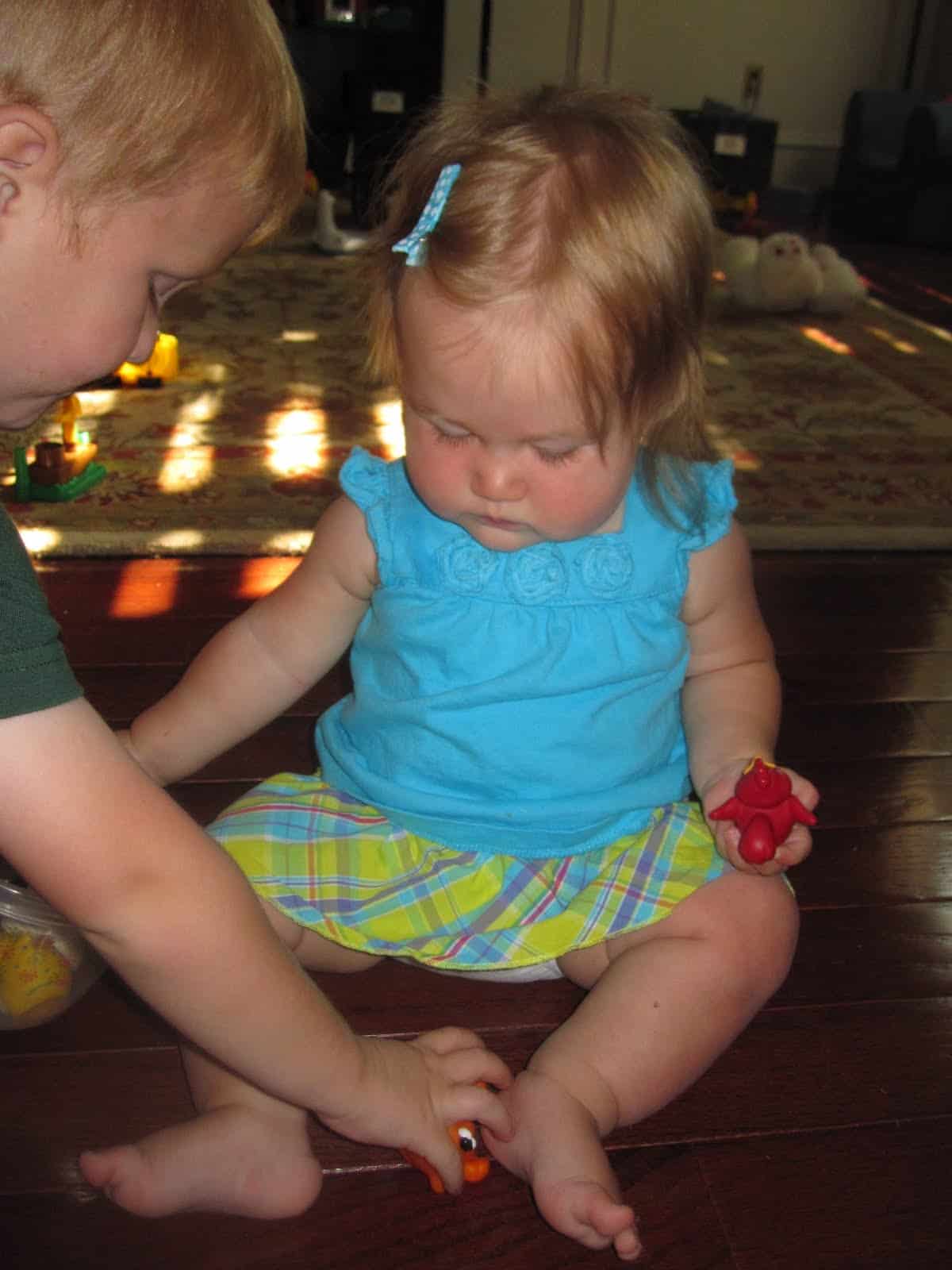