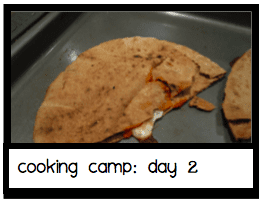 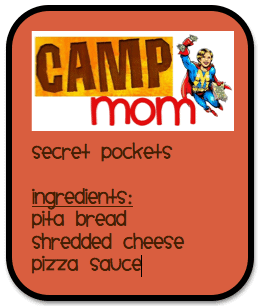 Cooking Camp was entertaining again today... and probably more of a learning experience for me than my little guy. I was totally humbled when I became one of those people that had to Google, "how do you boil a hard-boiled egg?"... after my first attempt wasn't so successful. Does anyone else want to come teach my kids how to cook? I'm obviously not the right person for the job. I specialize in dessert! I haven't boiled an egg since Easter.

Anyways, we made Sailboat eggs and Secret Pockets (aka Pita Pizzas... but we can't say Pizza because my son says he doesn't like it... though he totally does once he's eating it and it is called something different? Crazy kid!)

Secret Pockets are quick and easy.

2. Cut pitas in half 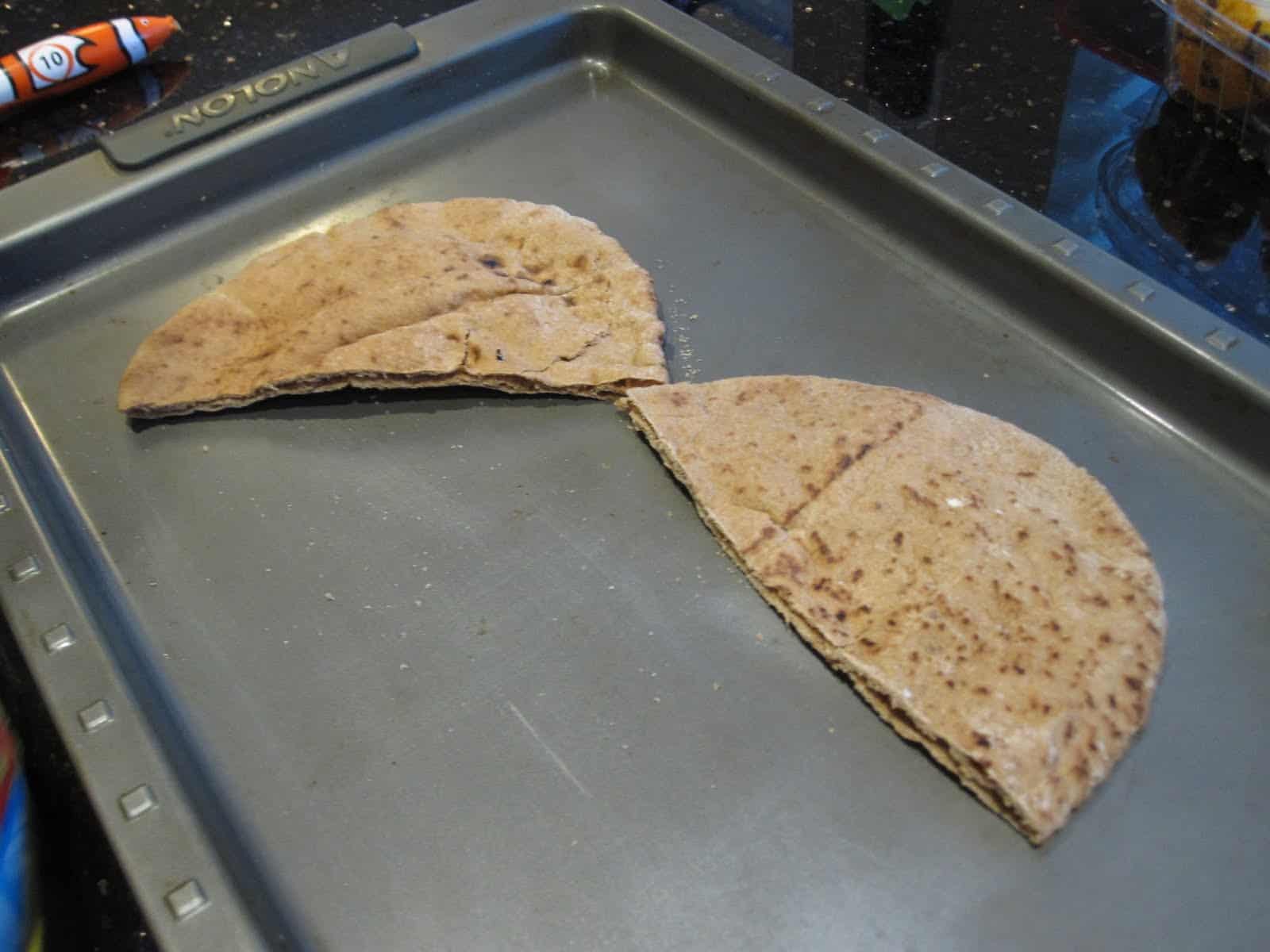 2. Have little chef secretly stuff the pita full of sauce. Tell him if he's sneaky enough you won't even be able to catch him doing it. 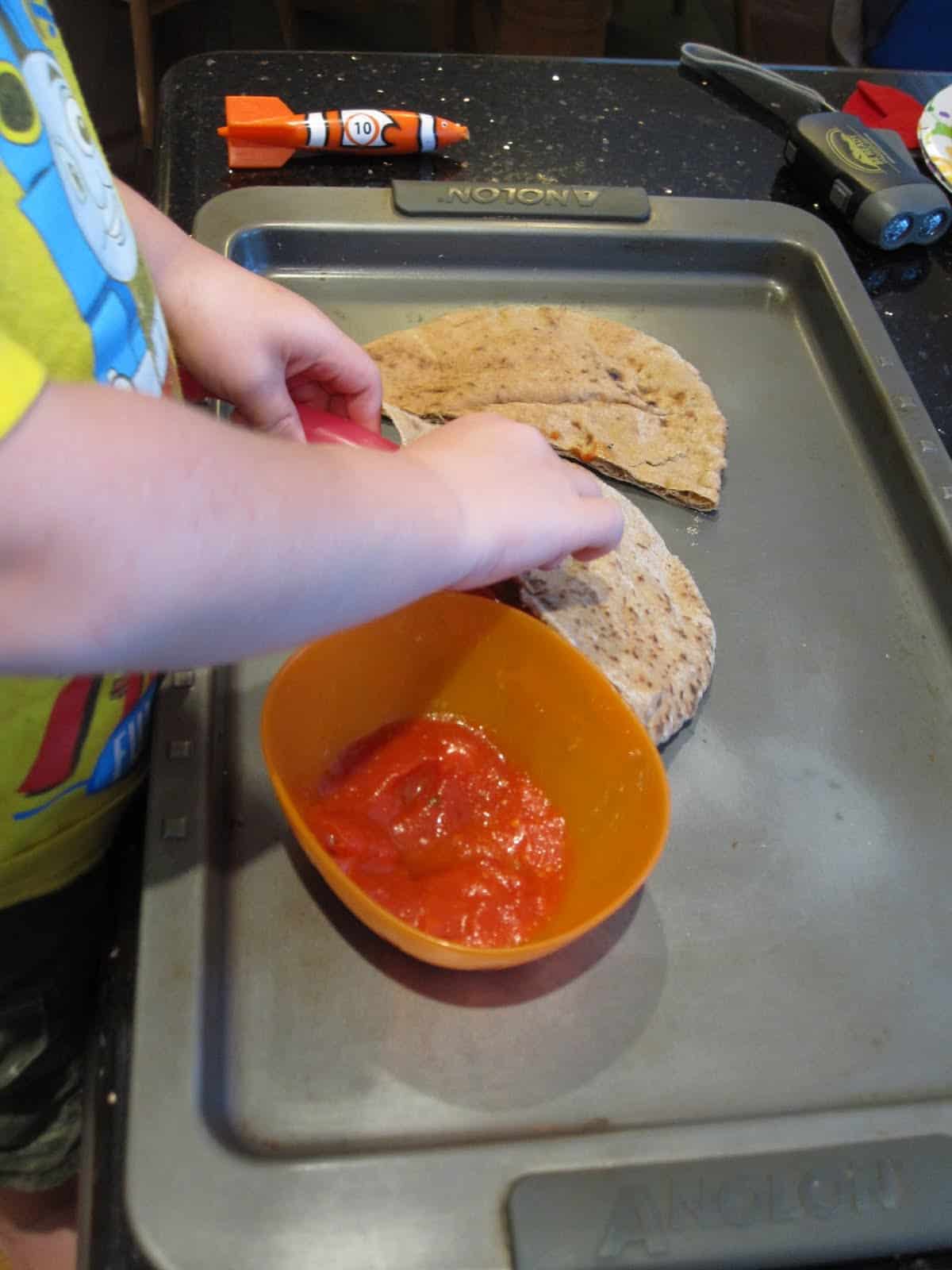 3. Next up, have him stuff that cheese into the pocket. A lot of cheese. If your little chef is like mine... he'll also secretly stuff a lot of that cheese in his mouth. I like to make him think that he isn't allowed to do that... it makes him eat more of it... and that is how I trick him to eat. 🙂 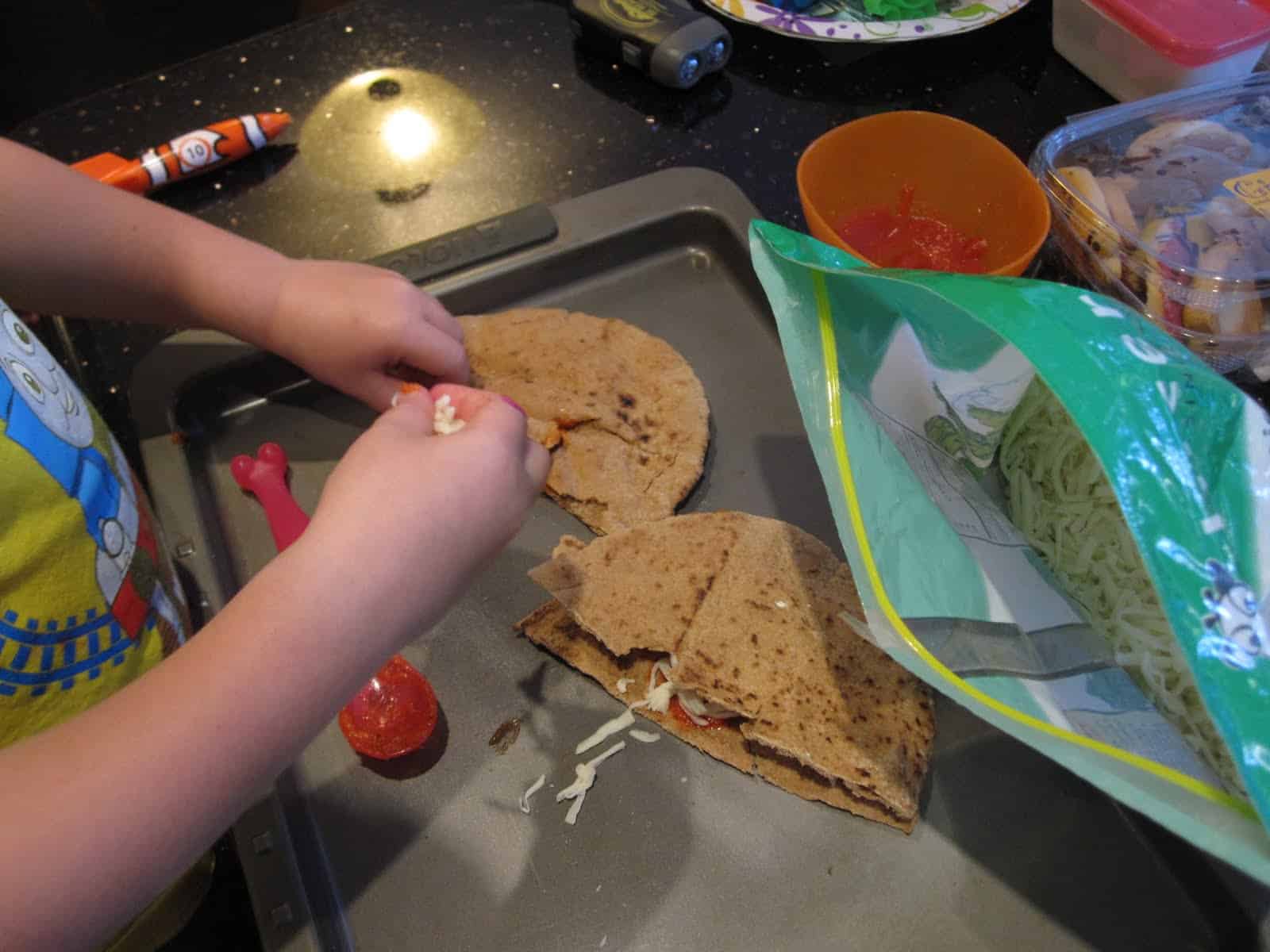 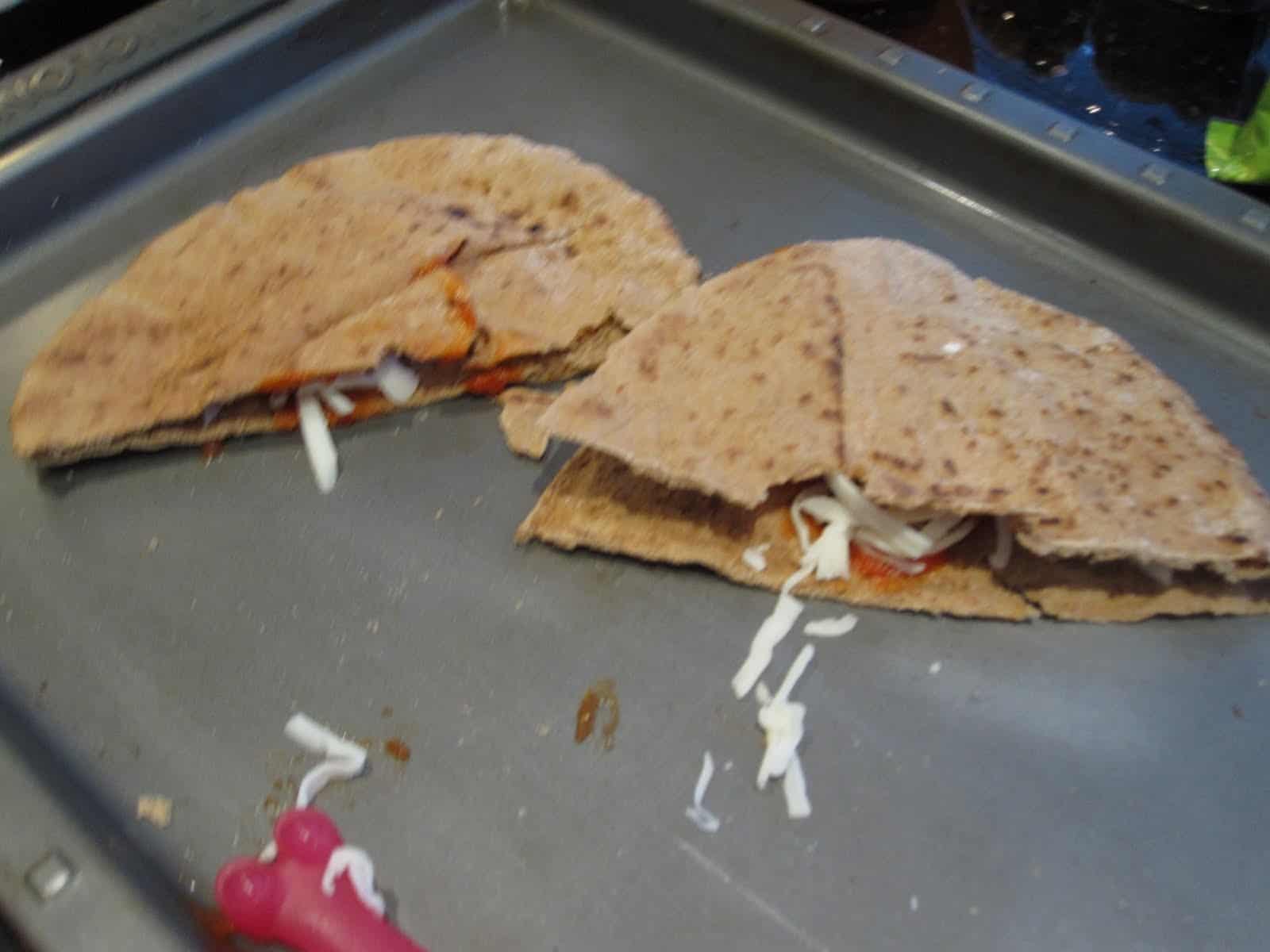 4. Bake the pizzas for about 7-8 minutes in the oven or until the cheese is melting and then take them out to cool (Adult only jobs!) 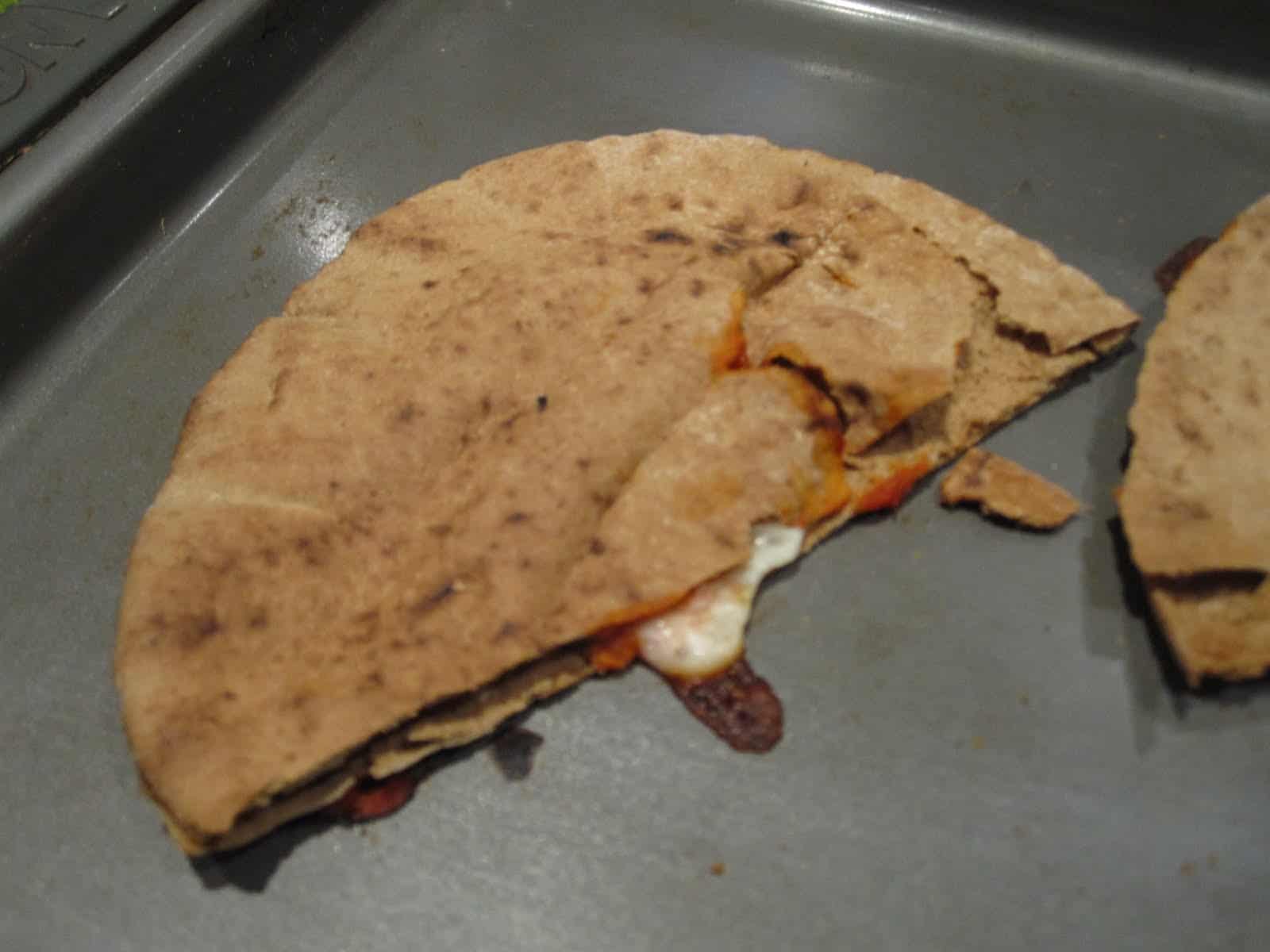 5. Grab your favorite parent and start eating the secret pockets so quickly that Chef Mom can't even believe it! (I wish! That happened for the first second or two... and then my little guy was back to saying, "I'm not hungry" or "I'm all done..." when we all know he is starving but he'd rather be playing.) 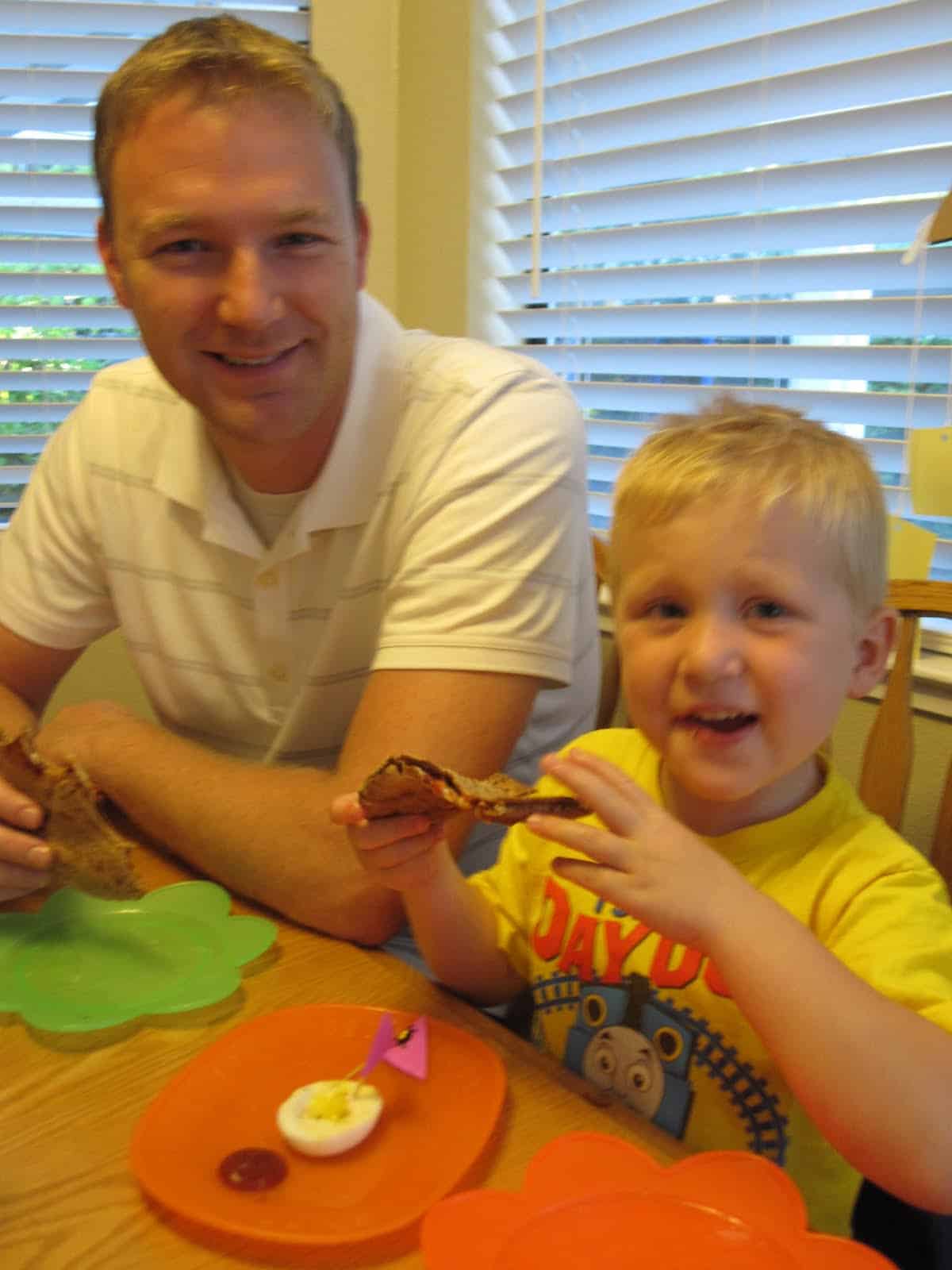 I thought these pita pizzas looked delicious. Unfortunately I'm not in the stage yet where our real food looks good AND tastes good. It is either one or the other. 😉 Some day...

The other simple task of the evening was boiling an egg. Simple being the key word... which it was not. We talked about high/low again as we turned on the stove, and cold/hot as we filled up the pot with water and started to let it boil... we also reviewed liquid/solid as we talked about how the inside of an egg is liquid before it is cooked... and solid, after it is hard-boiled.

We also talked about the differences between hard-boiled and soft-boiled eggs because my first round of eggs looked like this....

(my husband loves them this way though... cause he eats anything)

One of the eggs looked like this... which was pretty awesome. 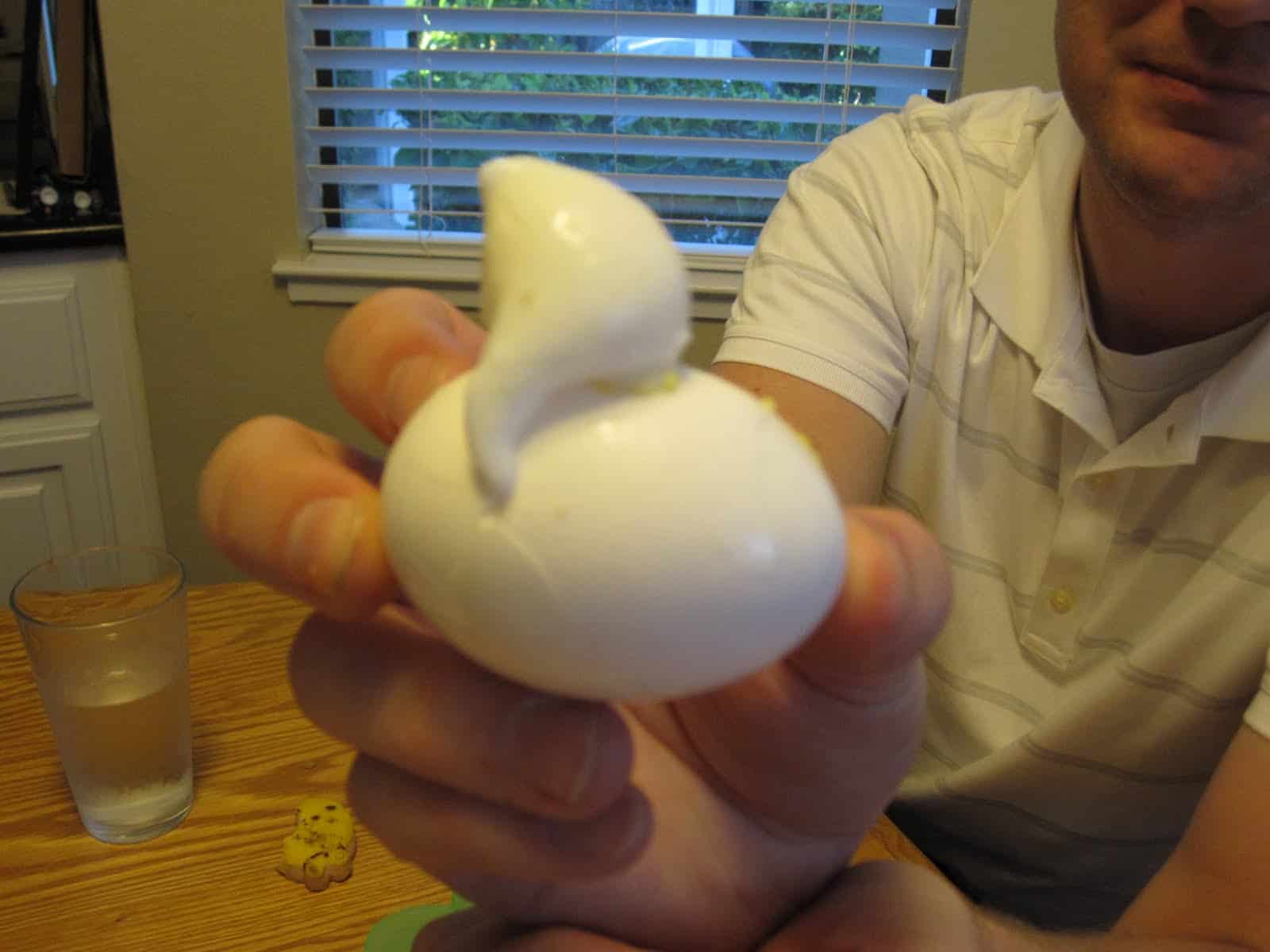 And then we finally got an actual hard-boiled egg. Hurray! 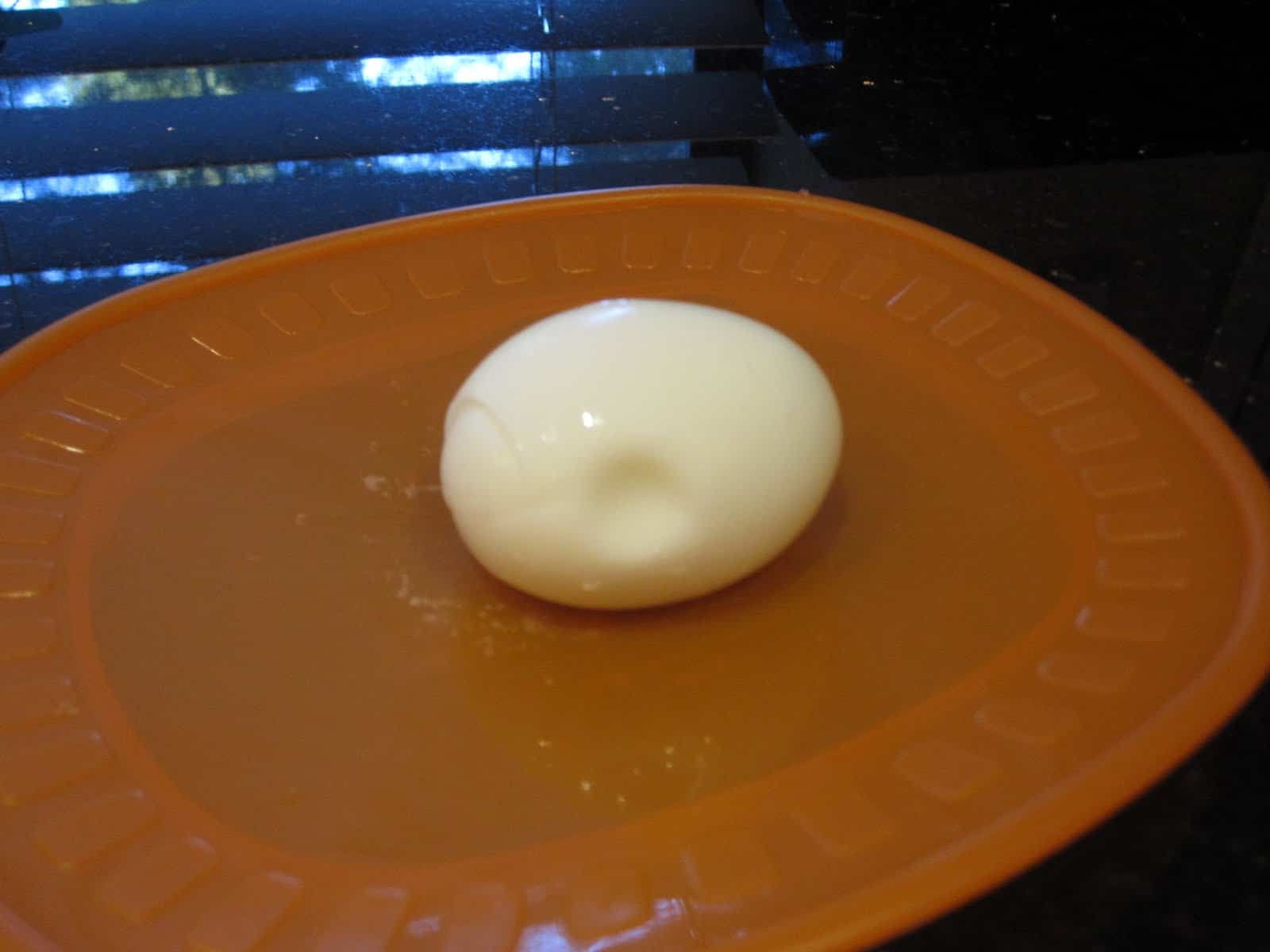 While we boiled the eggs, we painted sails for the sailboats and then we stuck stickers on them. 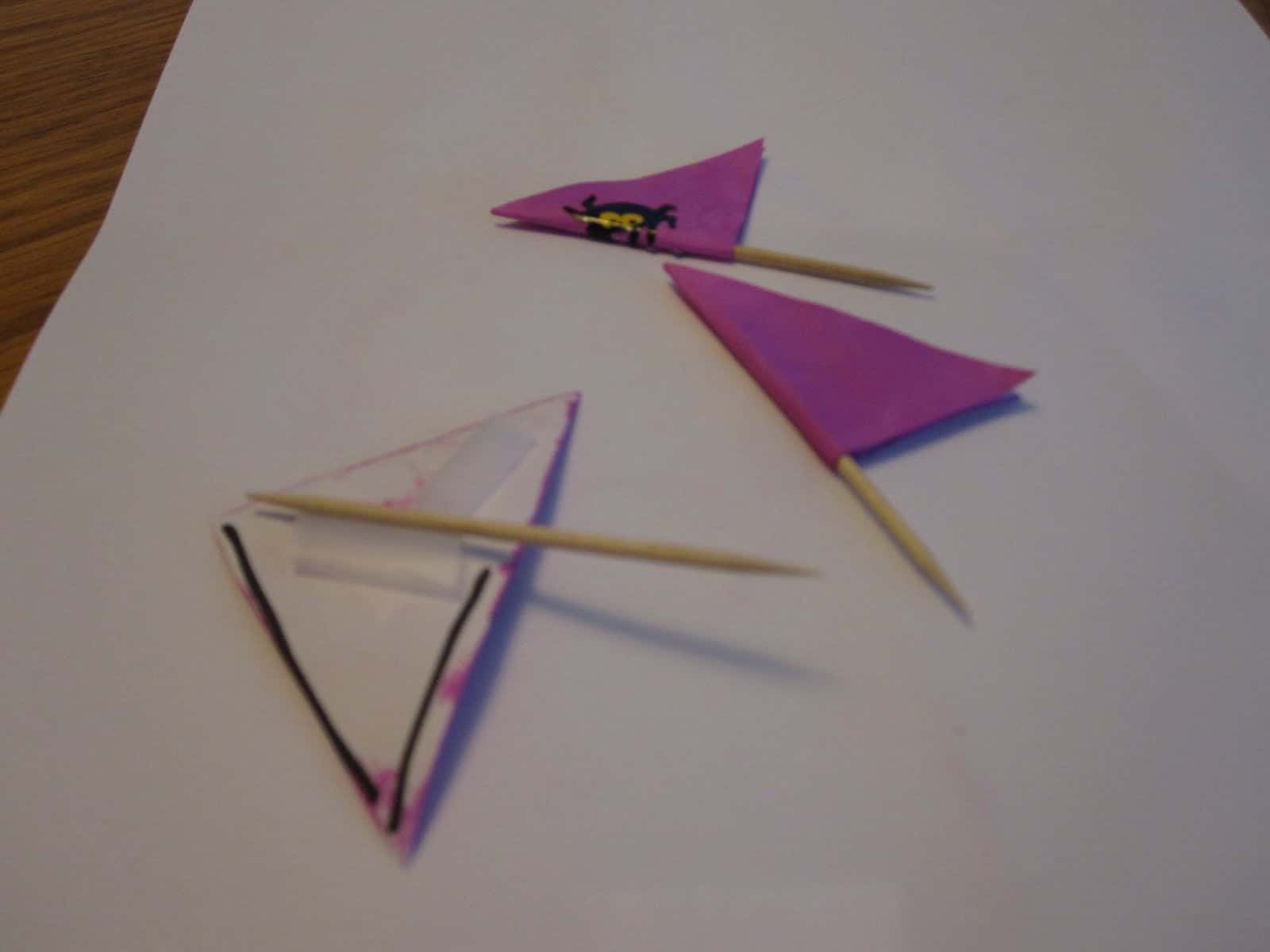 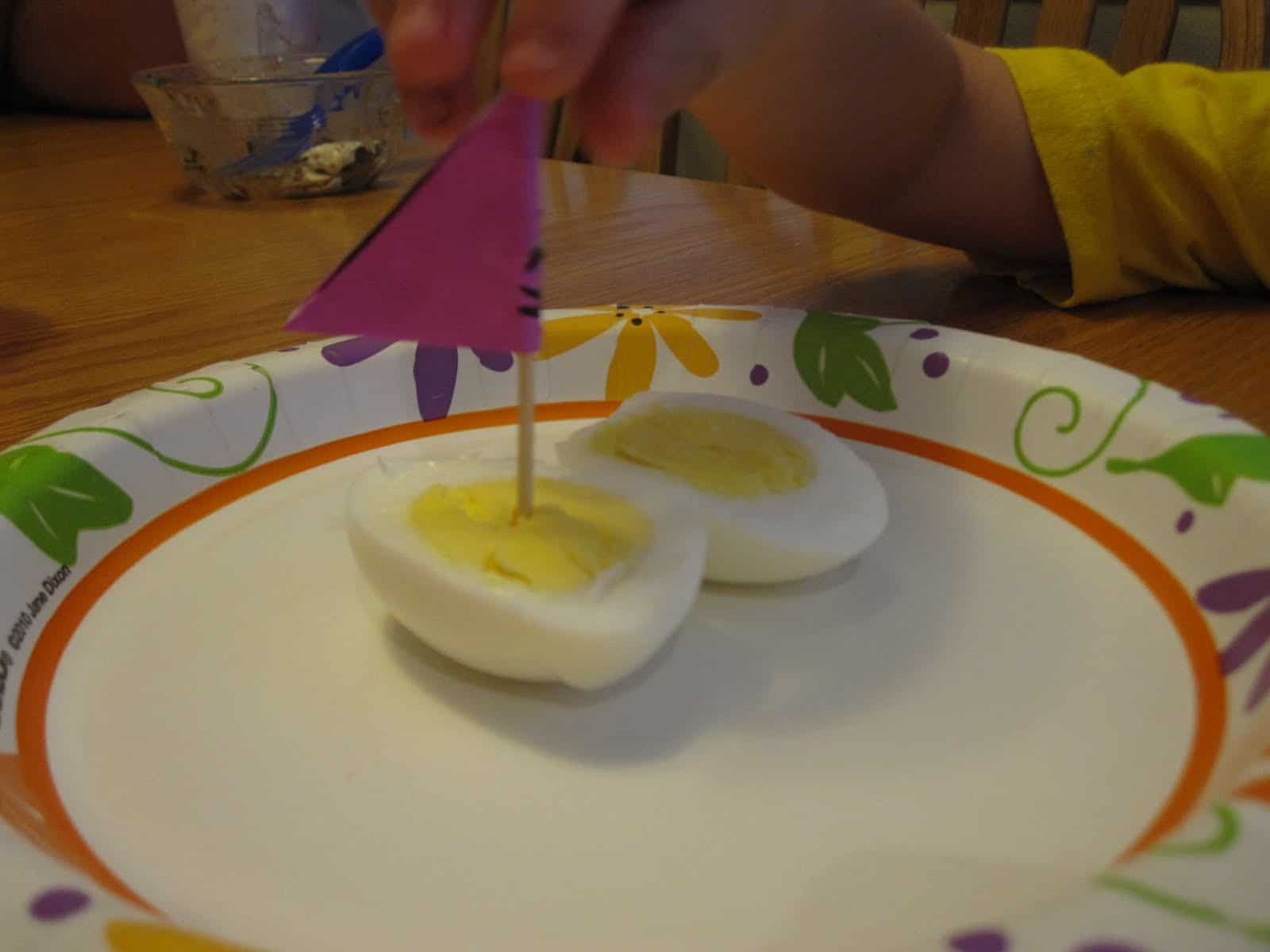 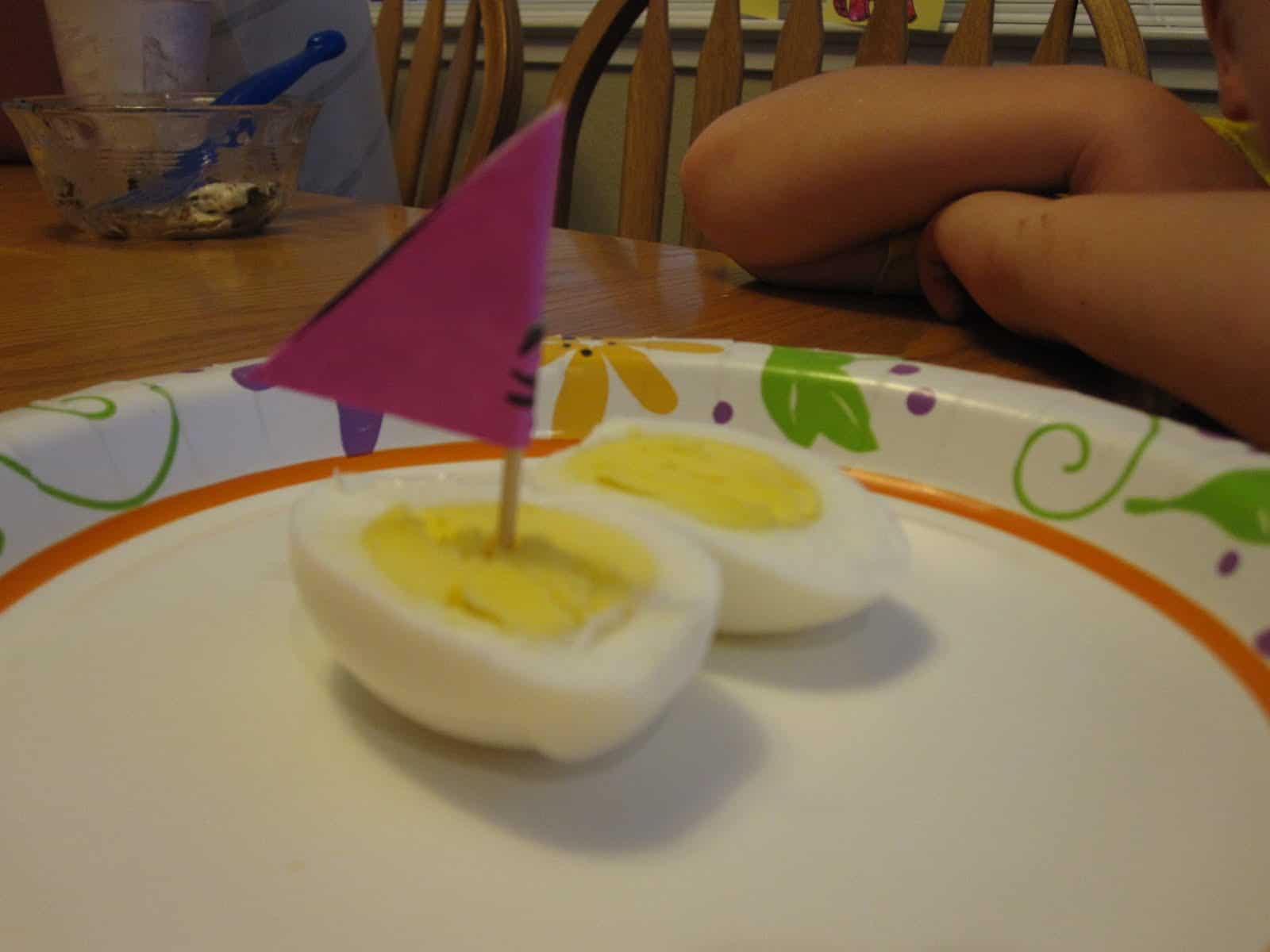 The inspiration for the sailboat eggs came from here...