We love having friends over to play and try out activities with us! I love collecting ideas from other blogs on Pinterest and then trying them out at our house. Some are total flops (not always because the idea was bad... but maybe the kids were off that day or it was tried out on the wrong age group), and some are total successes! 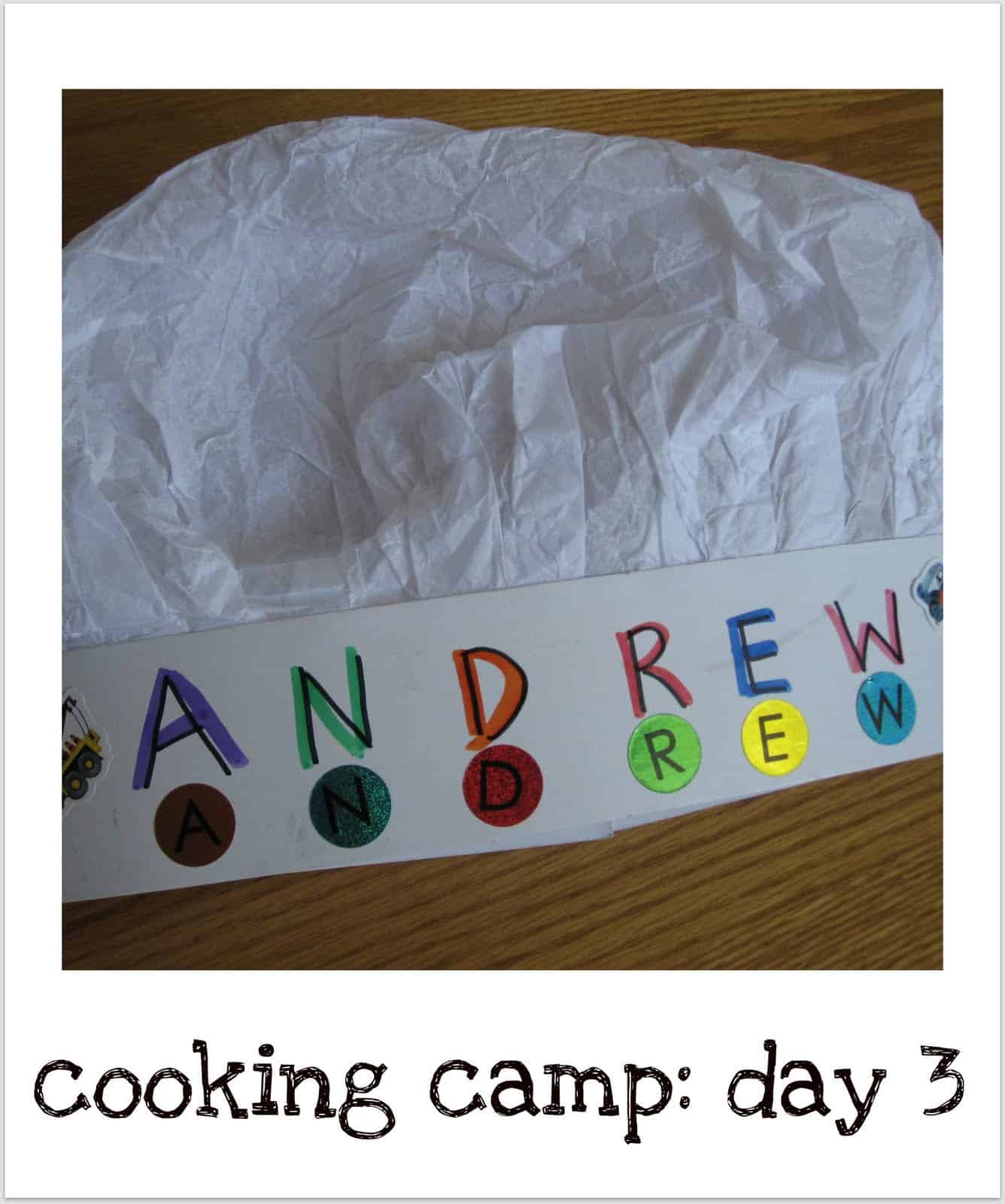 Little Chef Camp was two hours of fun with friends. While we waited for our friends to arrive, my little chef made me some peas and corn in his play kitchen. I love boys (and men) who can hold their own in the kitchen. My husband can make some amazing desserts. Love it!

When friends arrived, we decorated paper chef hats. I had a variety of stickers and markers. 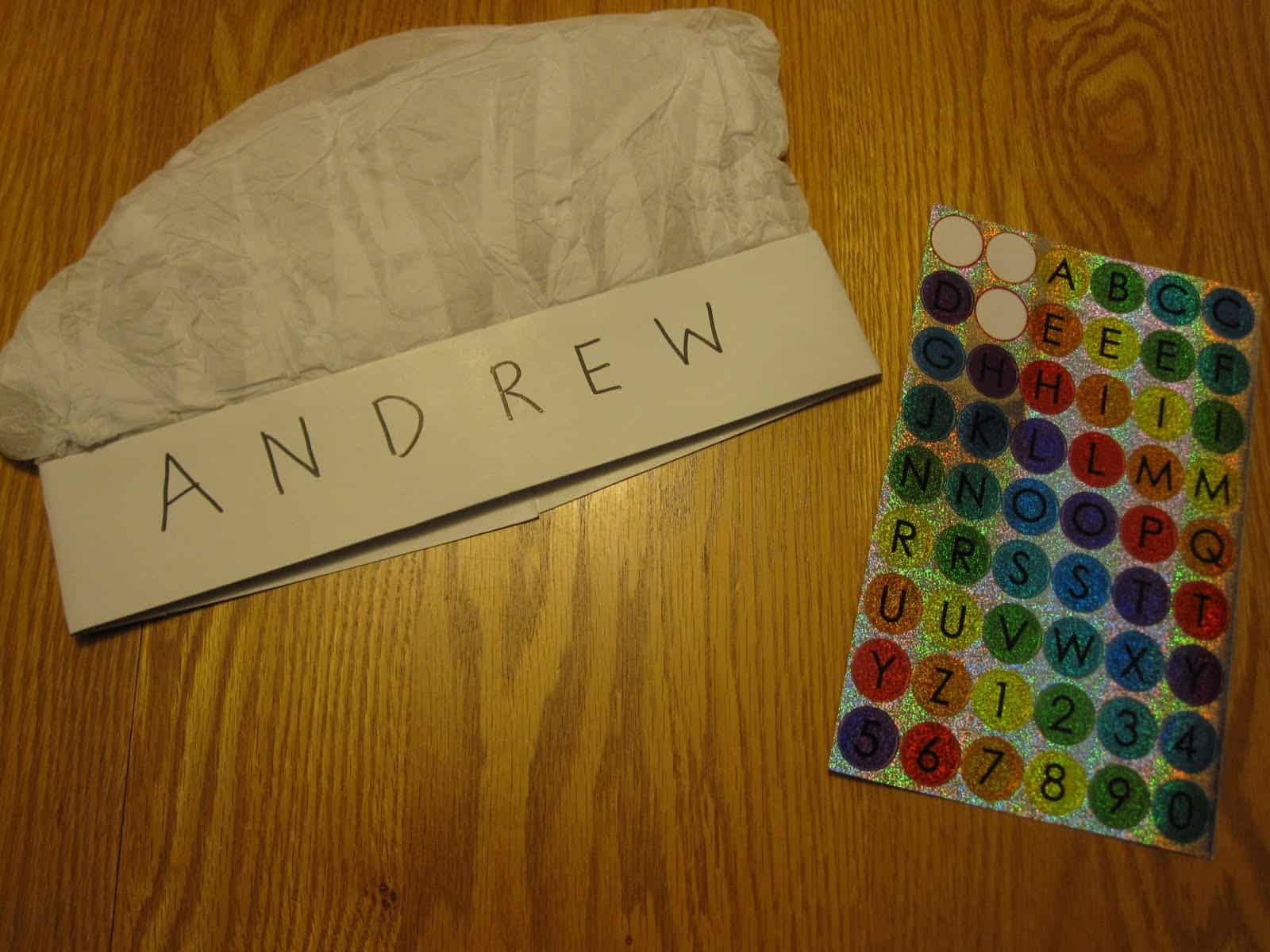 Some kids were totally into it... some just wanted to run around and ride bikes. I don't force kids to do crafts. My son, for example, was being the No Monster... so he decorated his hat with me later... and ran around with some of his friends instead. 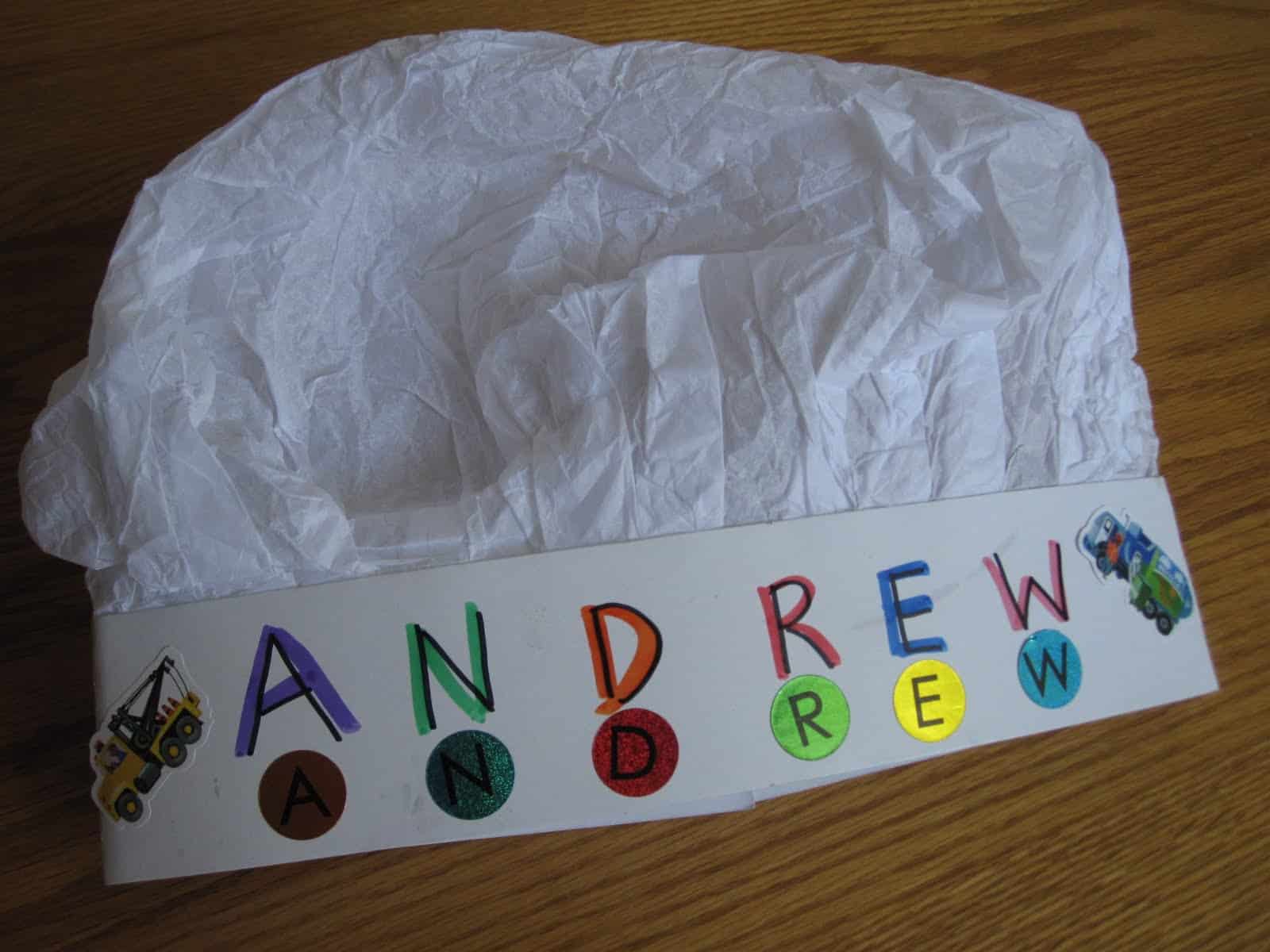 Next up, we made fruit and yogurt pops. 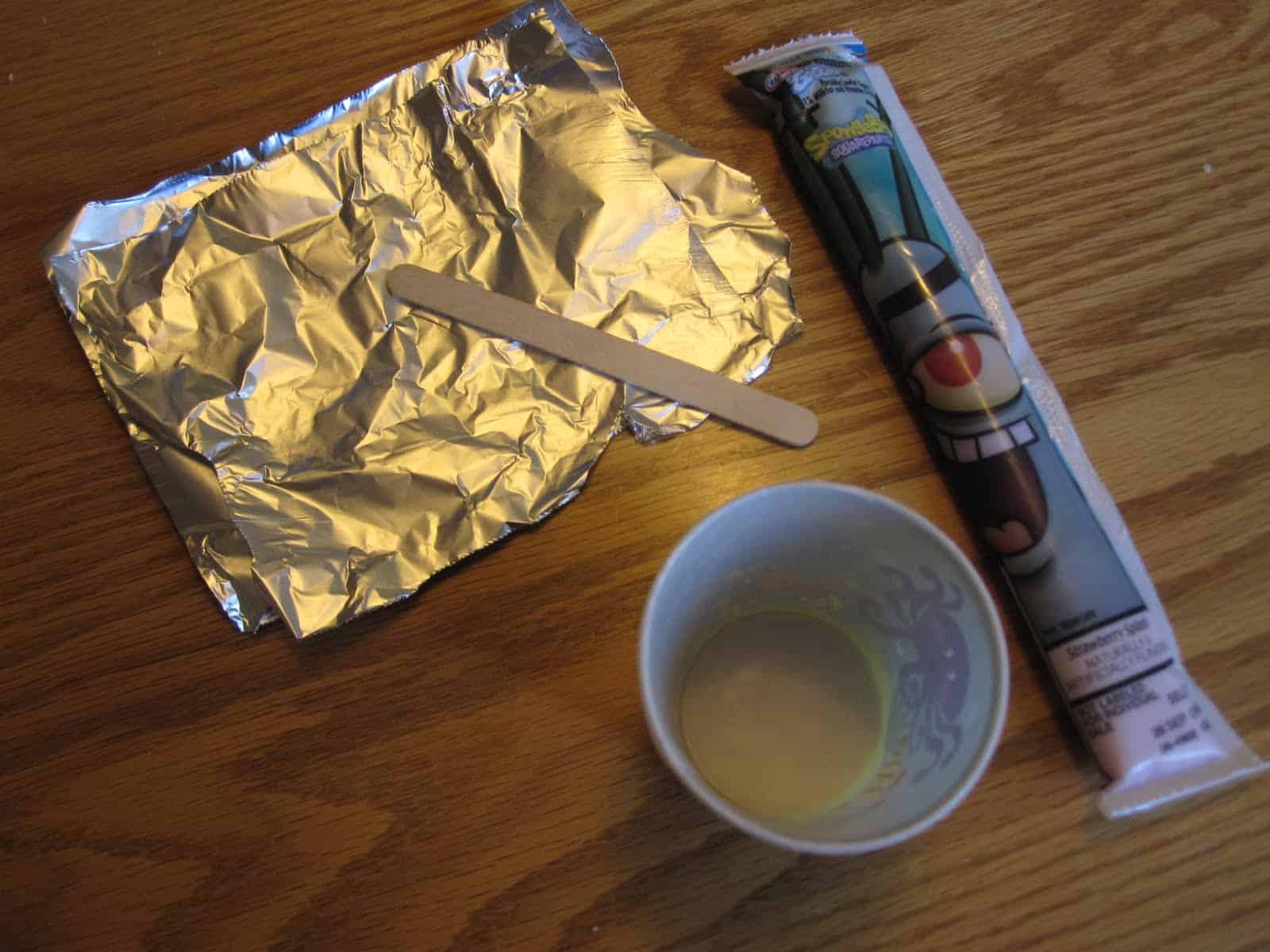 The kids squeezed out their go-gurts into their cups and then mixed raspberries and blueberries into the yogurt with their popsicle sticks. Squeezing those tubes is a great workout for little fingers who will be writing soon! 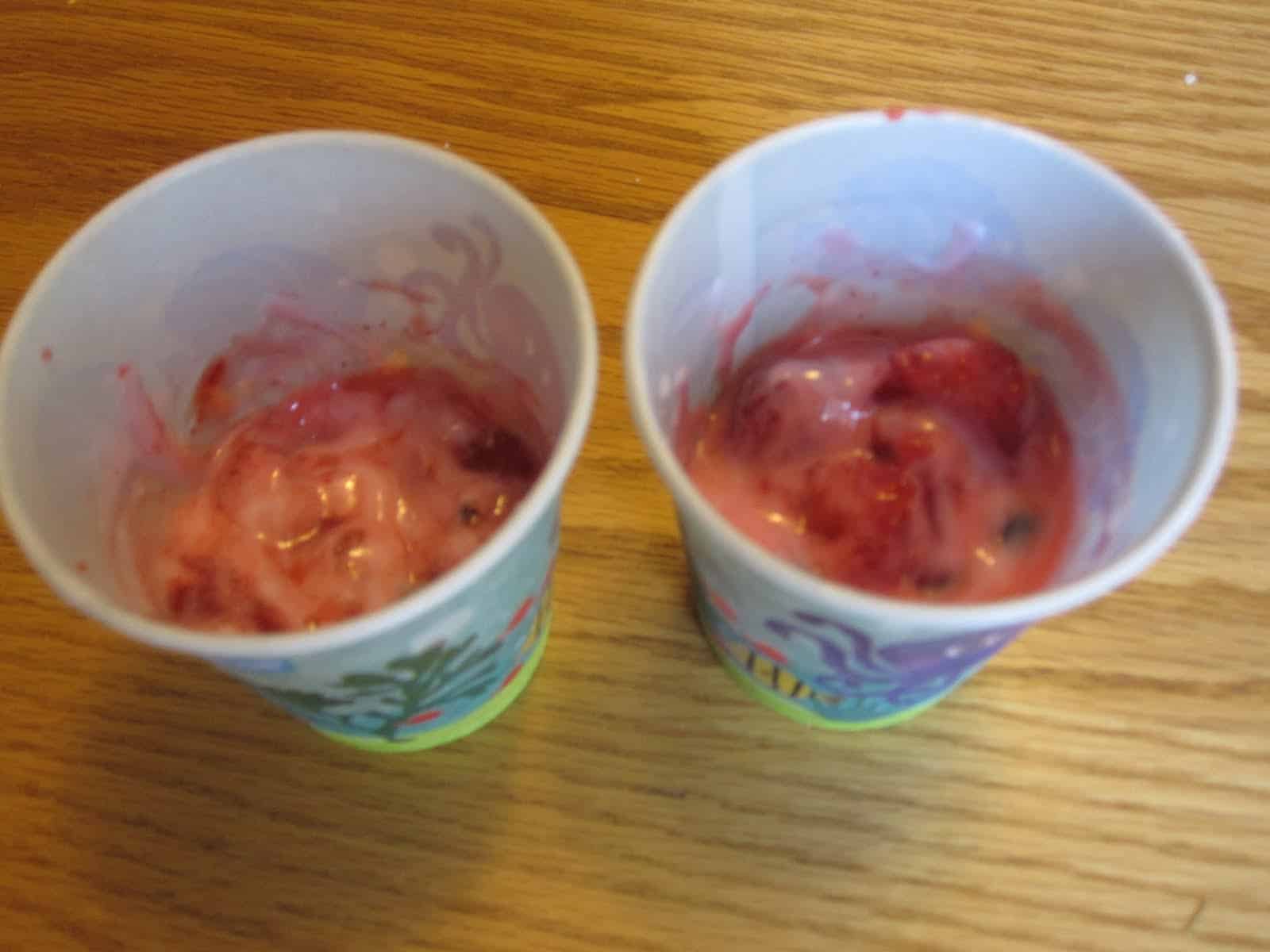 After we mixed, we covered the cups with little pieces of foil. Foil rips easily, so put little slits in the foil for the kids with scissors... and then have them stick their popsicle sticks through the holes. Some kids will need some hand over hand help with this (like my son)... since the excitement related to jamming a popsicle stick into something can sometimes make you miss your target (again and again :)). 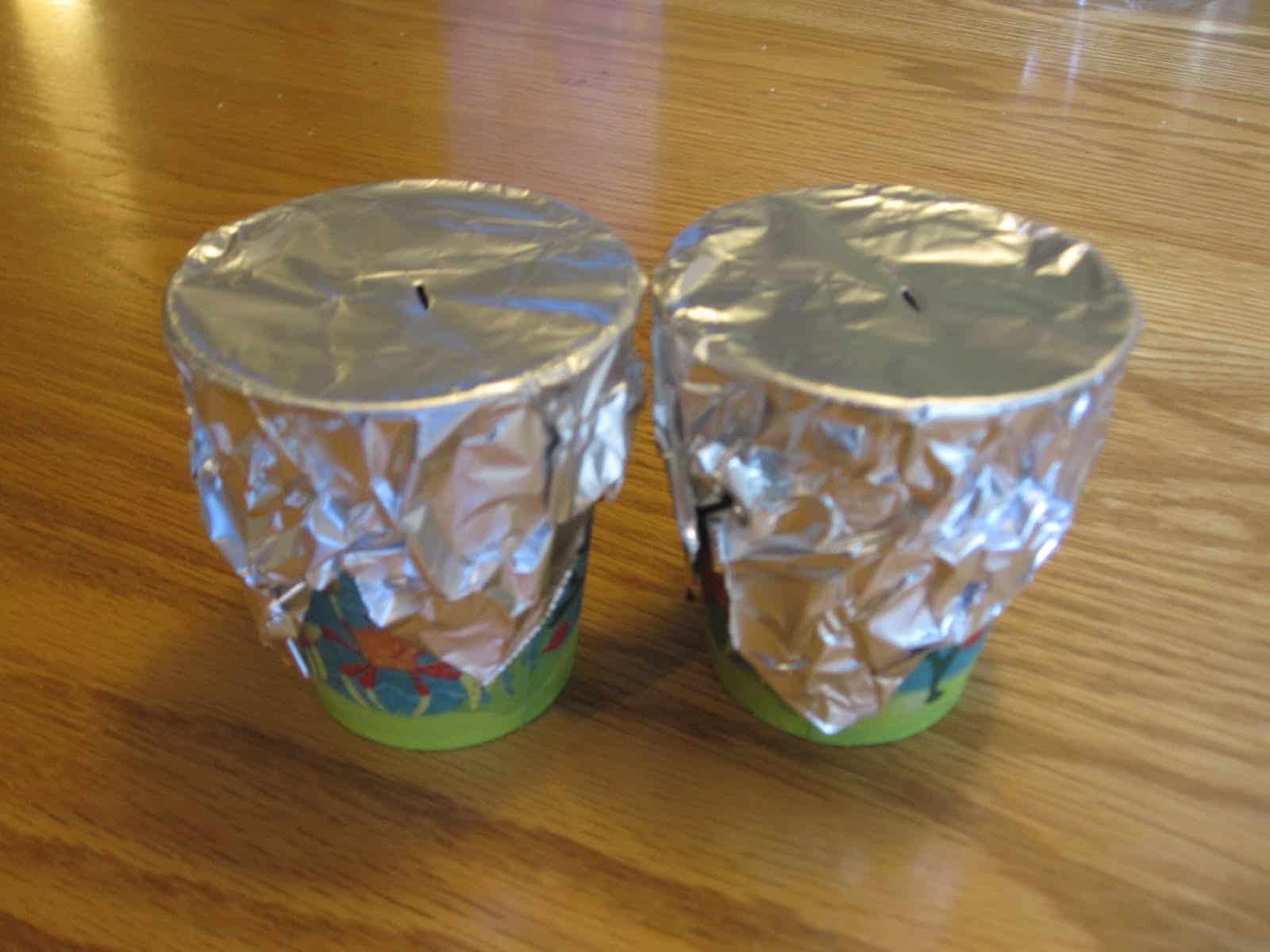 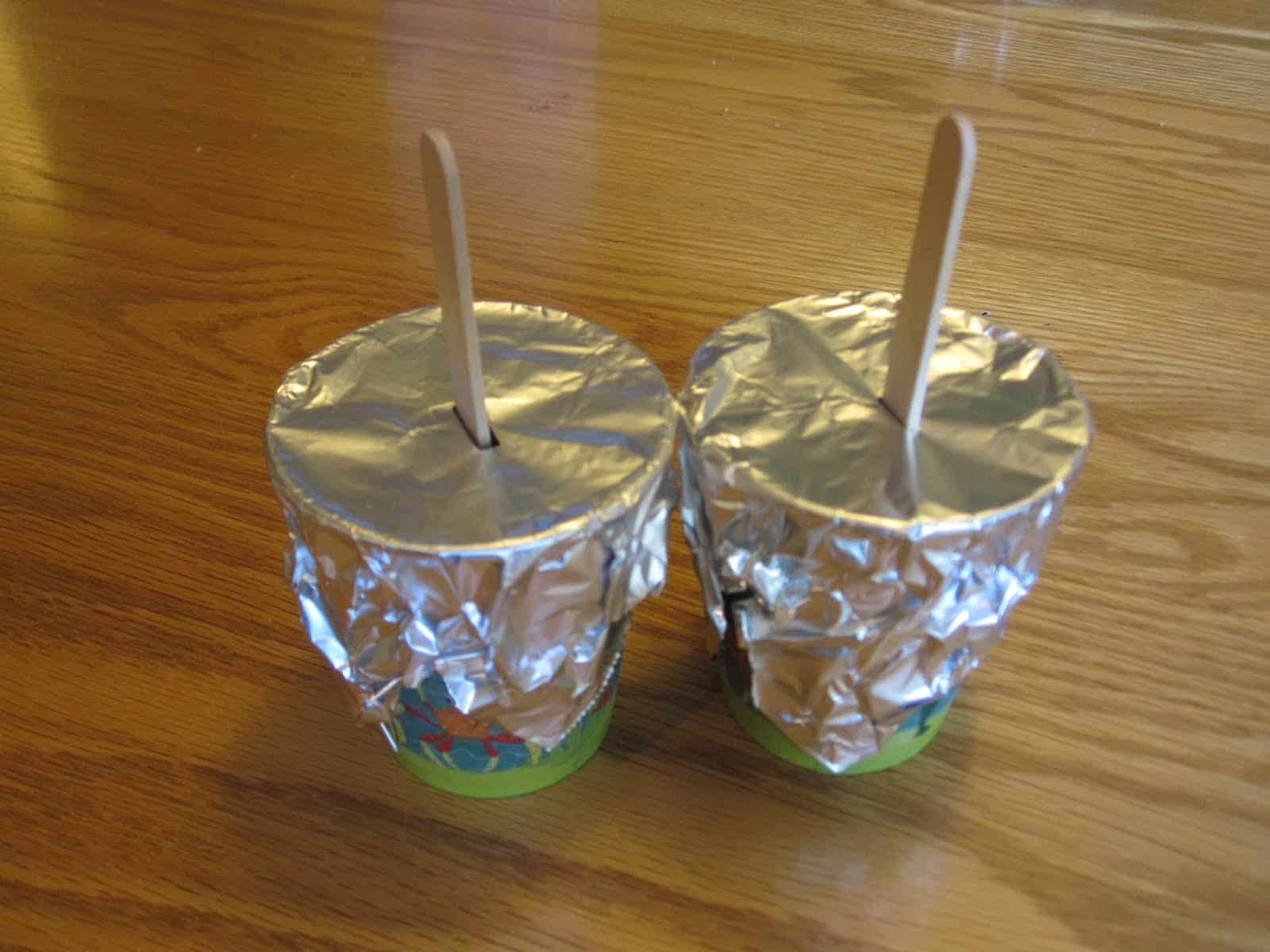 After about two hours, the pops were mostly ready. They would've been better (harder) if we'd had three hours to let them set... but our guests were heading home, so we ate them a little early. Definitely wait 3-4 hours if you are doing these at home! Yum! Yum! The kids wanted seconds and thirds. 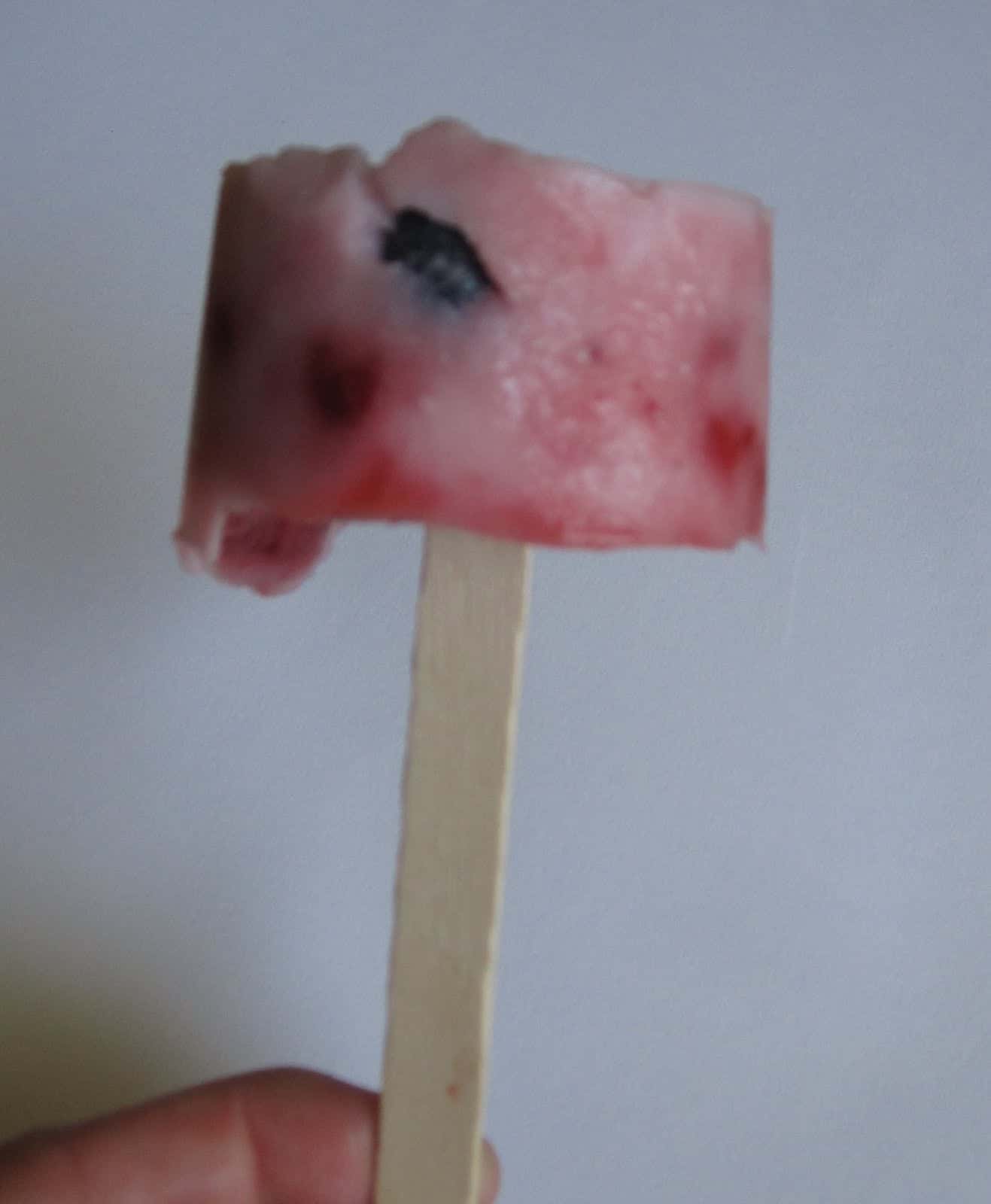 After popsicles, we decorated our chef aprons in time for our next activity... making spaghetti hot dogs. For apron decorating, I had foam stickers and Fabric markers. I was going to get out the puffy paint too... but past experience has taught me that puffy paint with 2-3 yr olds turns into incredibly big globs that take forever to dry... so we nixed that since we only had 2 hours. If you have more time than I did... do freezer paper stenciling with the kids onto the aprons. It would look awesome. 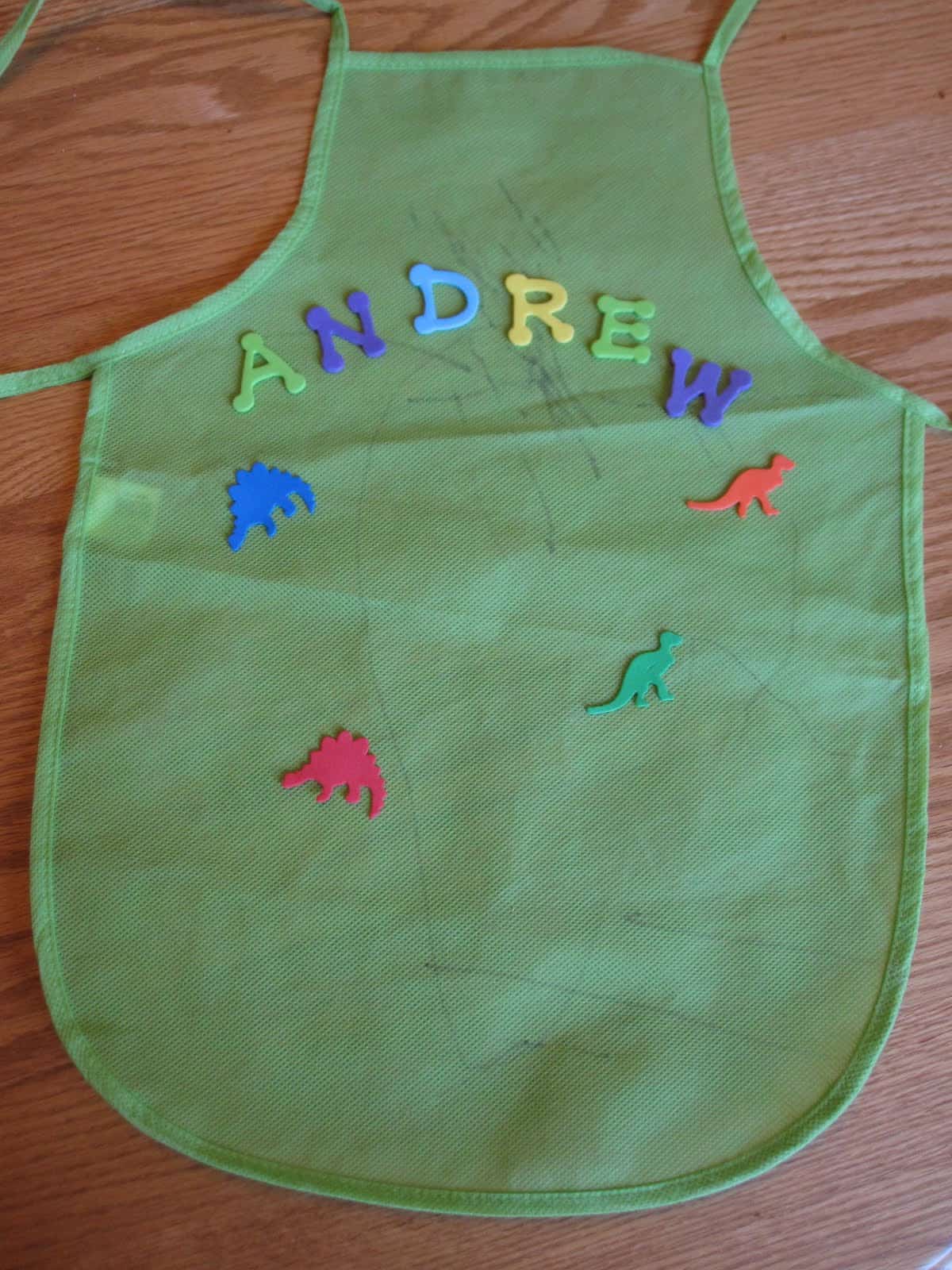 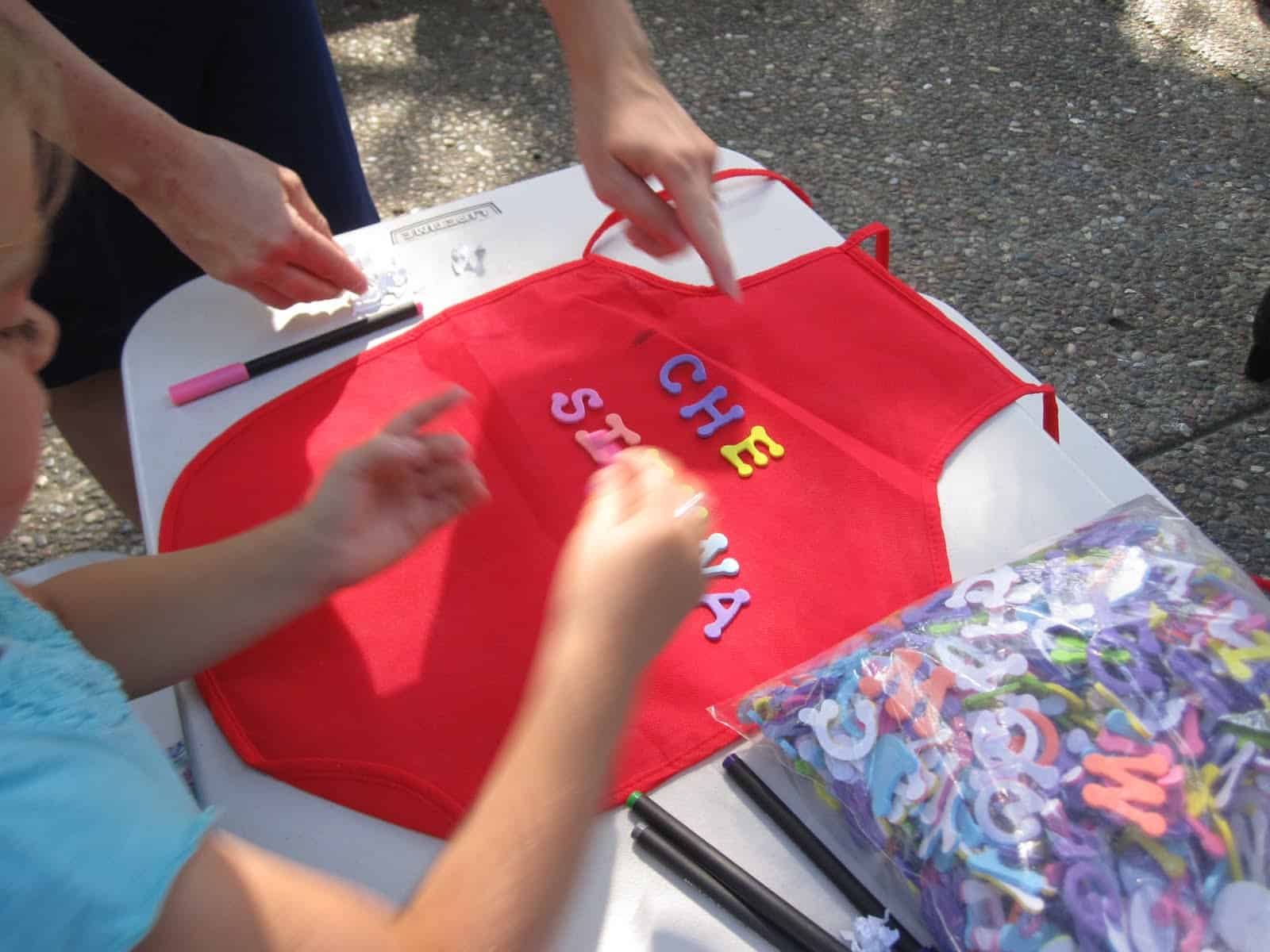 The spaghetti hot dogs were a bit hit. The kids loved shoving the spaghetti through the hot dogs. It was interesting to see how each kid did this... because I didn't provide an example. I loved it! Some kids (and parents) get so caught up in making it "right," that they aren't really letting their imaginations work. This picture below is of our spaghetti hot dogs from the other day... I didn't get a pic of our camp ones... which I am sad about, because each one was so amazingly different. It was fabulous!

They are adorable, but the kids needed a lot of adult assistance. The kids decorated their clothespins with markers and googly eyes and filled their ziploc bags (and tummies) with snacks. I think more snacks went in their stomachs than baggies... but one little boy had a meltdown when he couldn't take the butterfly with him to the bathroom... so I'd consider the project a success... or at least one the kids liked. 🙂

We ended the day eating our popsicles and doing Utensil water play in our baby pool. My favorite was using the colander to sprinkle water everywhere! 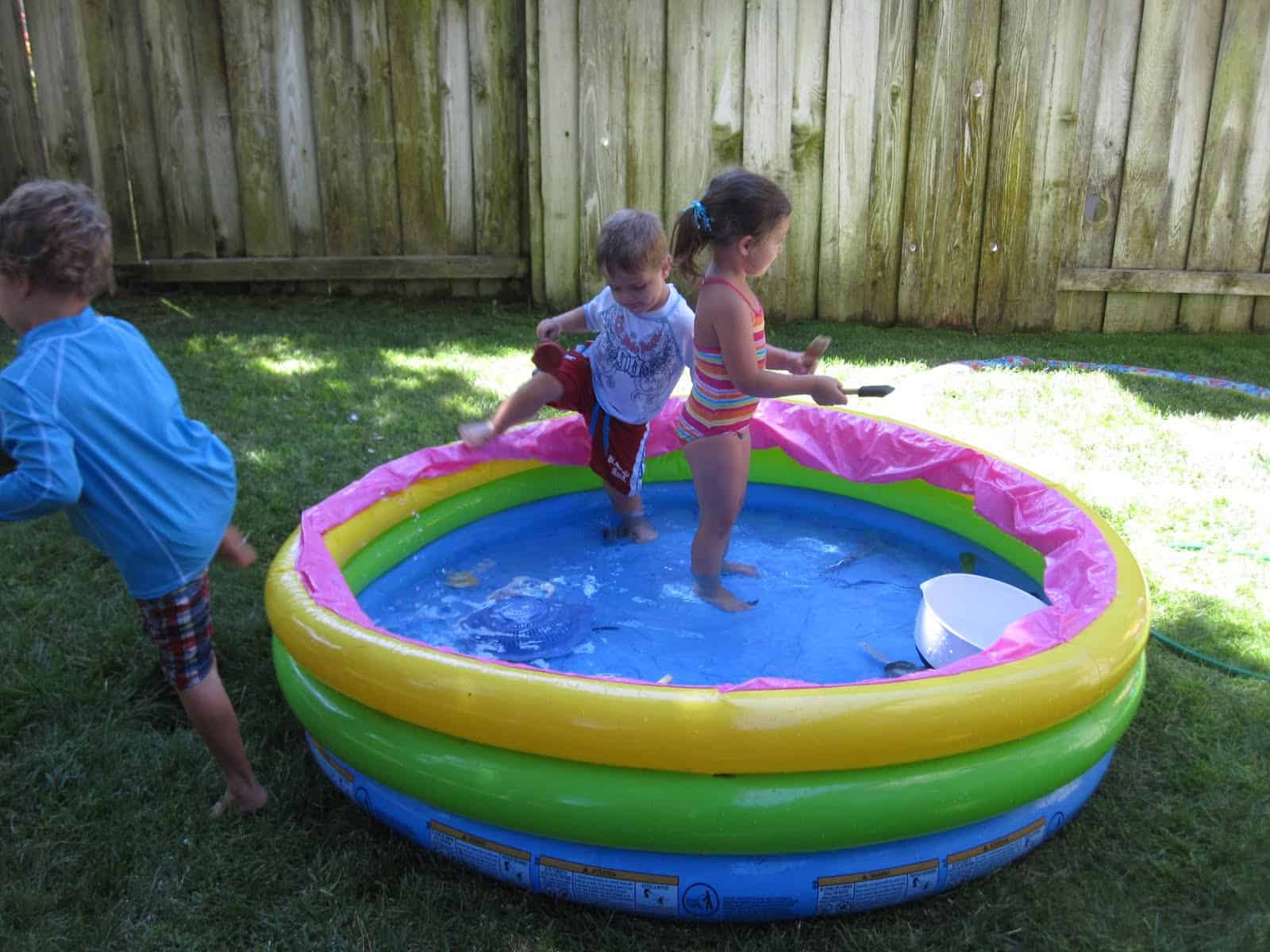 Having buckets or pots outside the pool can also be fun. Kids can use ladles to move water from one place to another. Splashing is inevitable, so review your expectations for kids regarding splashing behavior! Our rule at our house is if you're in the pool, you're going to get wet! So have fun with it! That being said, getting whipped with water or dumped with water in the face by a ladle or bowl of water is no fun. This is a great time to encourage kids to communicate with their friends and listen to what their friends say or check out what their body language is saying too. Younger kids have a really hard time reading body messages... so help them out and let them know that their friend isn't liking what they are doing (or is loving it). Overemphasizing what not to do is less productive than encouraging kids in what they can do. If you find yourself saying, "don't splash your friend"... try to stop yourself and think, "What do I want my child to be doing instead?" I have to do this a lot. If you can't think of anything... then maybe they shouldn't be in the situation in the first place. Finding positive constructive things to say instead of getting trapped in a "don't do..." mindset can be hard for everyone. My son notoriously finds the most annoying thing to do (or most bothersome to friends activity) and does it again and again. He gets positively reinforced every time he does something because he gets loads of attention from friends. Although the attention is negative... it is still attention. Hopefully I'm not the only mom out there with this problem? (I think not) Finding the positive and focusing on what he can do (is allowed to do) always gets me out of my frustrated mindset... and helps me find ways to help him interact better with his friends.

Nobody is perfect- moms included- so this can vary from day to day.

We had tons of fun activities planned... but we ran out of time or I didn't think they were appropriate once we got going with the group. If you plan on having a Cooking Party, definitely try some of these other game ideas out. Pass along feedback if you do them too!

Utensil Candy walk- draw pictures of utensils on cardstock, laminate them, and stick them in a large circle on a flat surface (patio, garage floor, driveway, wood floor). Play your favorite kid songs and have the kids walk in a circle. When you stop the music, have them find a card to stand on. Show them a utensil. If they are standing on that card, they get a piece of candy or a high five... 🙂 Start the music again and keep going till everyone has won a few times or you've learned all of the utensils!

Utensil Hot Potato- Have the kids sit in a circle, sing a song, and pass around one utensil. When the song ends, the child who still has the utensil gets a sticker and a cheer and then we play again and again until everyone gets a sticker. With older kids I might play traditional hot potato (where kids go "out")... but generally I am not a fan of elimination games! They typically cause hard feelings. If you have another fun activity that they can go and do once they are eliminated then that works too! A cute song I found is Hot Potato to the tune of London Bridge- "Hot potato pass it on, pass it on, pass it on. Hot potato pass it on, you, are out."

Waiter Water Relays- Fill up cups of water and place them on trays. Put kids into teams of 3-4 people and have them take turns racing with the cup filled tray to a specific point and back. Give points to teams that cheer for one another, finish first, finish last, and have fun 🙂 Have the winning or losing team come up with something silly that the other team has to do (fly around like airplane, spin like tops, etc.). Next time rotate and have the other team get to choose.

Ladle Relays- Have kids work in teams of 2-3 to use a ladle to fill up a bucket with water. I was planning to have them use the full baby pool. Kids take turns scooping water up from the pool and walking across the yard to a bucket. Once they dump their scoop in the water, they pass it off to another team members. Team members each take turns and keep filling the bucket until it is full! The team that fills it first wins!

Pass along any other cooking party/camp ideas that you have. I remember having several cooking themed birthday parties growing up and I loved them! I will definitely be doing this again.