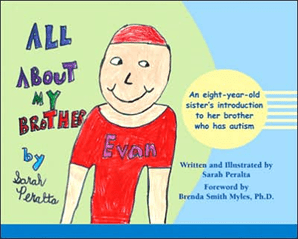 All About My Brother* by Sarah Peralta is a beautiful book to use to teach kids about autism. One of the things that I spent a lot of time doing as a Special Educator was teaching children (and adults) without disabilities about autism. Some students feared kids who were different than they were and some staff members had never taught students with autism before and had inaccurate ideas.

I love this book because it moves past just talking about autism, and talks about Evan, Sarah's brother. Evan has autism, but that isn't the only thing that is important about Evan. He has many interests like playing with sticks, playing outdoors, swimming and playing with his dog. Evan is a person, not a disability. I love that his sister Sarah wrote this book to help others learn about children with autism.

Activities you could do along with this book:

1. Make a class/family book called "All About Our Class/Family" - include a page for each child with a self-drawn picture or photo and some simple facts about each child/family member.

Wouldn't one of these photo books be so fun to make? You could easily make your own with cardstock, contact paper, and a 3-ring binder.

2. Talk about "differently abled" people that you know... and your own differences/similarities. Everyone has strengths and challenges (or things they have to work harder at).

3. Role-play/Practice how to reach out to others- those we don't know, those who act differently than we do, and those who we are afraid of. Sometimes kids don't know how to approach individuals with disabilities, what to talk with them about, what to play with them, etc. As you help kids get to know their classmates/peers with autism and help them understand them a little bit more, it becomes easier for them to interact on their own (without needing as much parent/teacher guidance).

For example, once my third graders learned about a few of the kids with autism in their class and discovered their interests, strengths, and best way to communicate with them, they tried harder to initiate with them and include them in activities. One 3rd grader recognized my student with autism loved basketball. He began inviting him to shoot the basketball around with him at recess. First, we took some time to show him how to get the attention of my student, clearly ask him to play (while holding the basketball as a visual cue), and wait for him to process what was asked. Shooting hoops became a favorite recess activity and helped my student with autism get to know several other 3rd graders who also loved basketball. These new friends also were much more interested in sitting near my student during class once they realized they had a similar hobby.

How else do you help your students get to know one another/reach out to those who are different?