Today we worked on making groups of 3... since my little guy turns 3 -years-old in a few weeks! Neither of these ideas are original, but they were definitely a hit because they involved M&Ms. I had to take the M&Ms with me if I left the room though... or else I would catch the little dude stuffing handfuls into his mouth!! 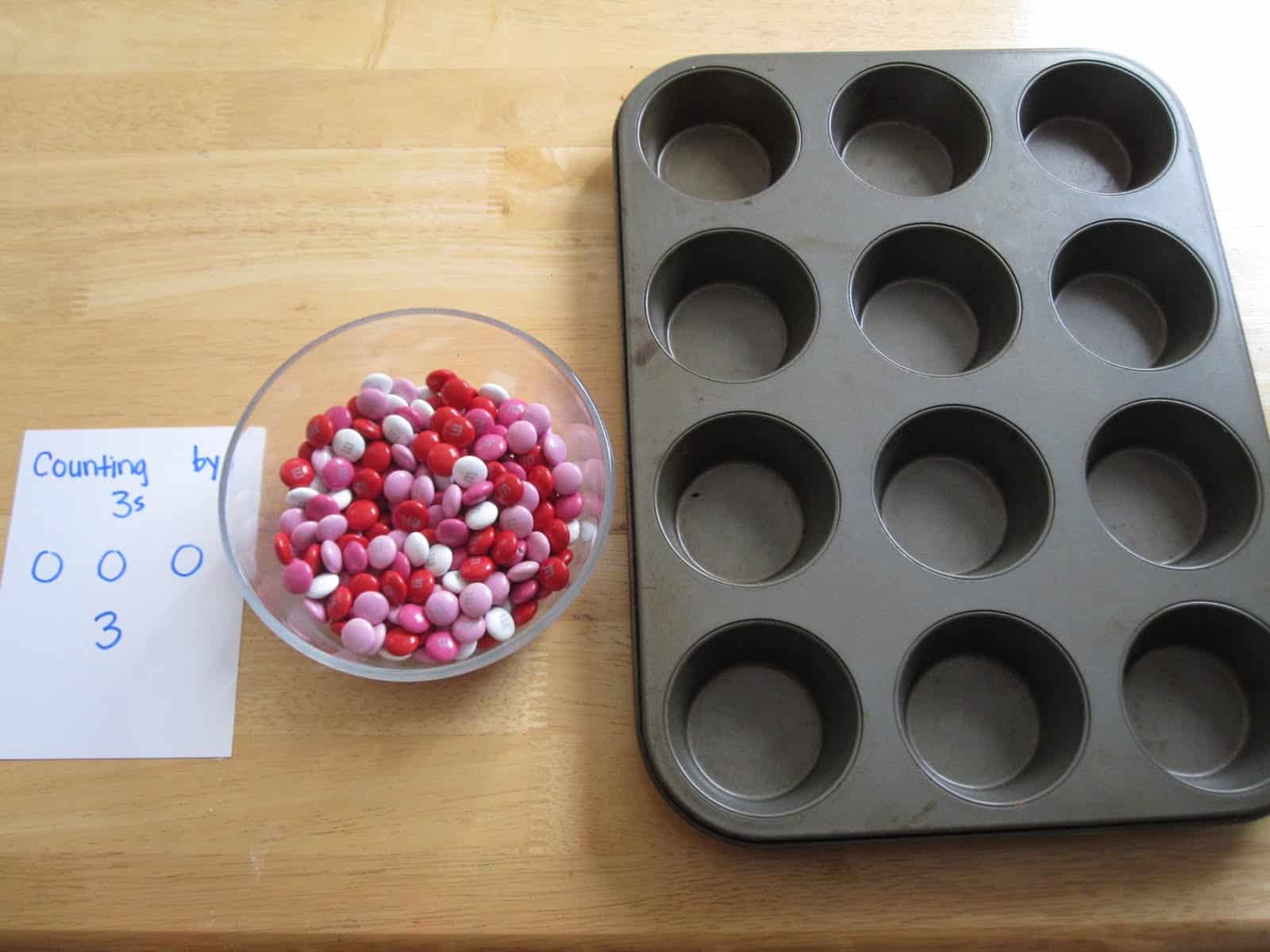 We used a little number card to help us practice counting up to 3. Once we practiced for a little bit we tried putting three M&Ms in each muffin spot. 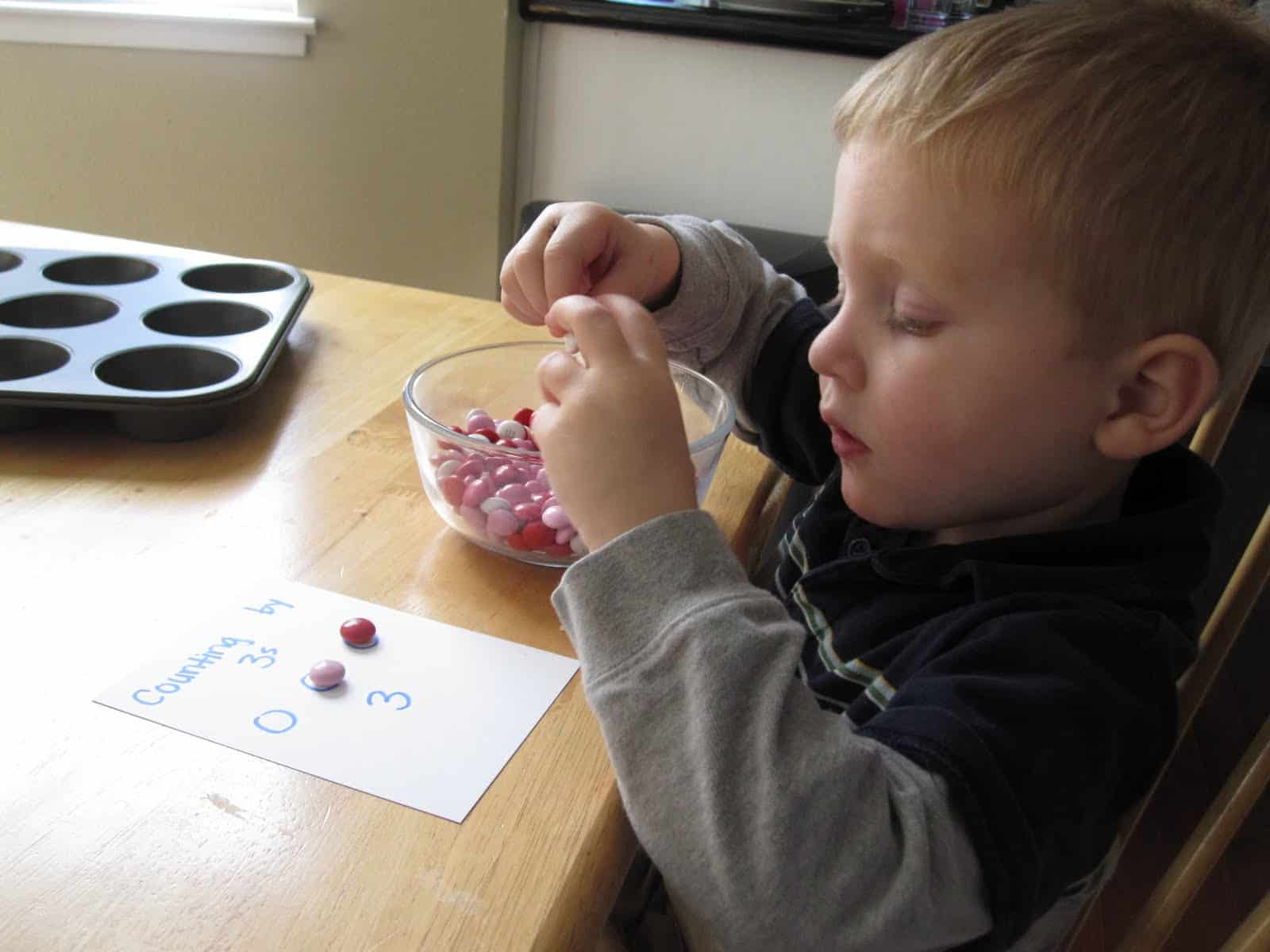 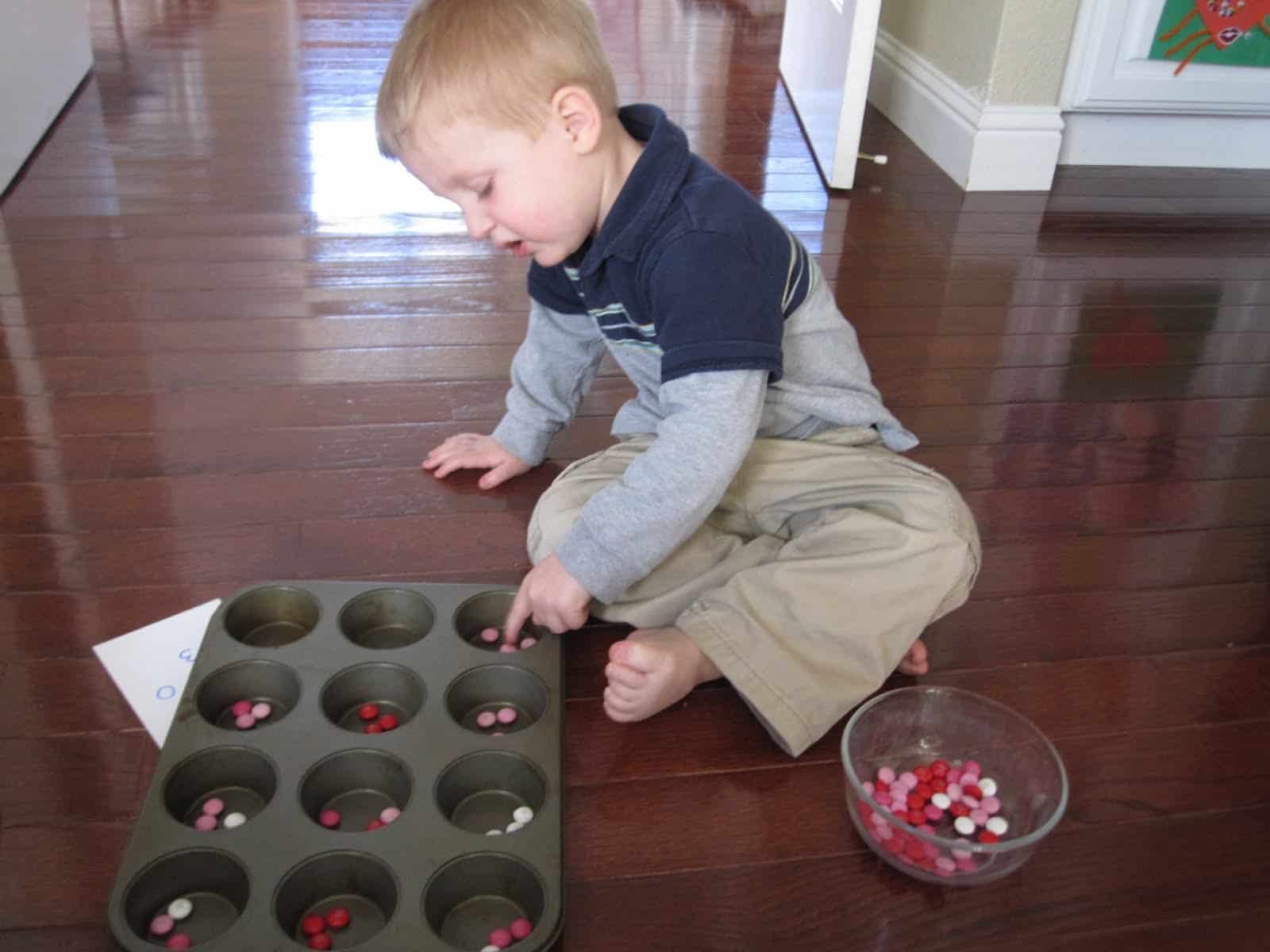 We have done this before and it wasn't hard, but man was this hard for him today! Next time I plan to line the cups with muffin tin liners and draw three circles on each liner to use to help him the first few times we do this. Today we had to keep stopping to count up each tin because he would get so excited and put too many in each tin... and then we'd count and try again. 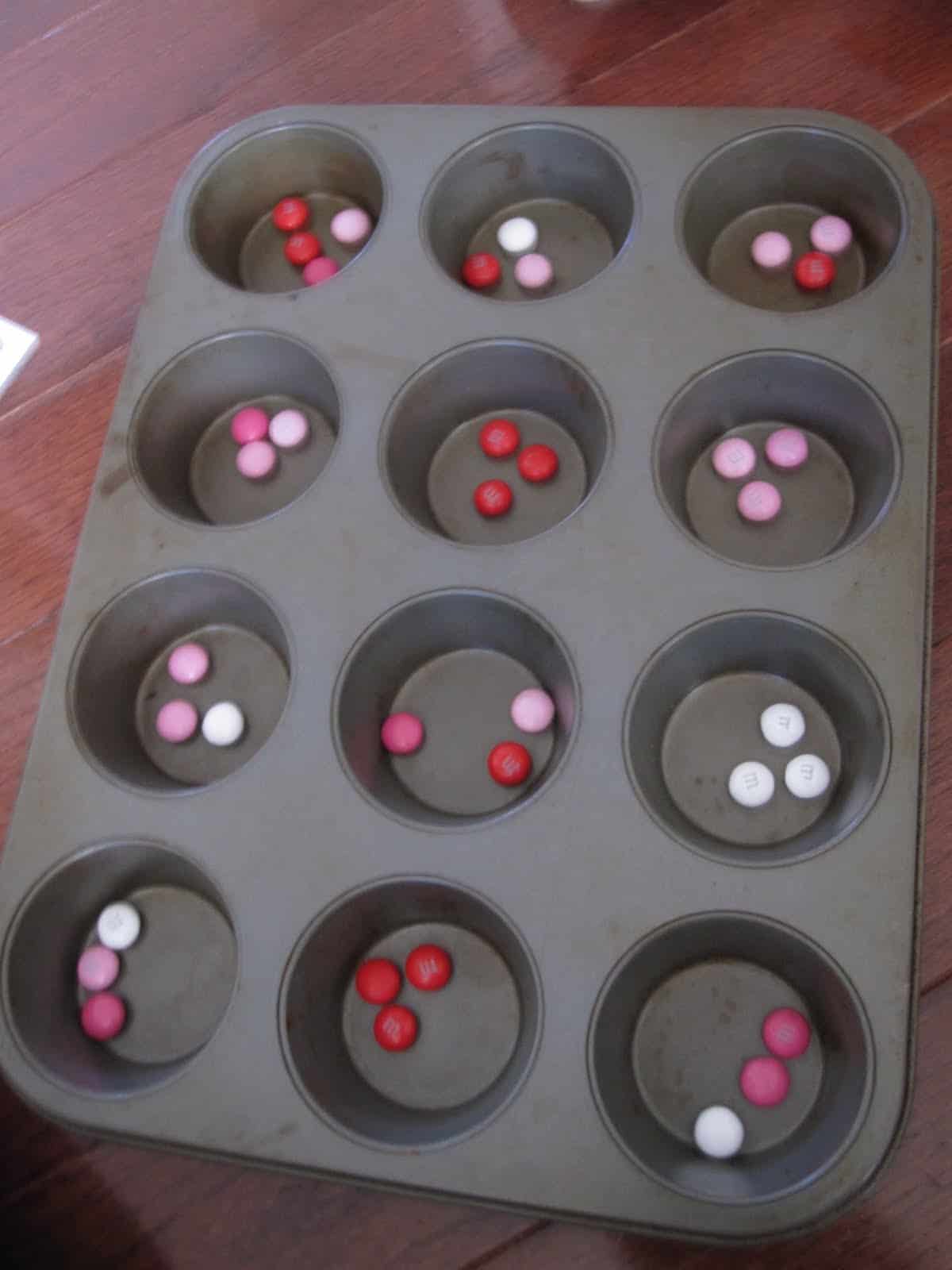 M&Ms Bingo was much easier... more fun... and a family affair (don't ask me why my son wanted to sit on the hard wood floor... I would've rather been on the carpet!) 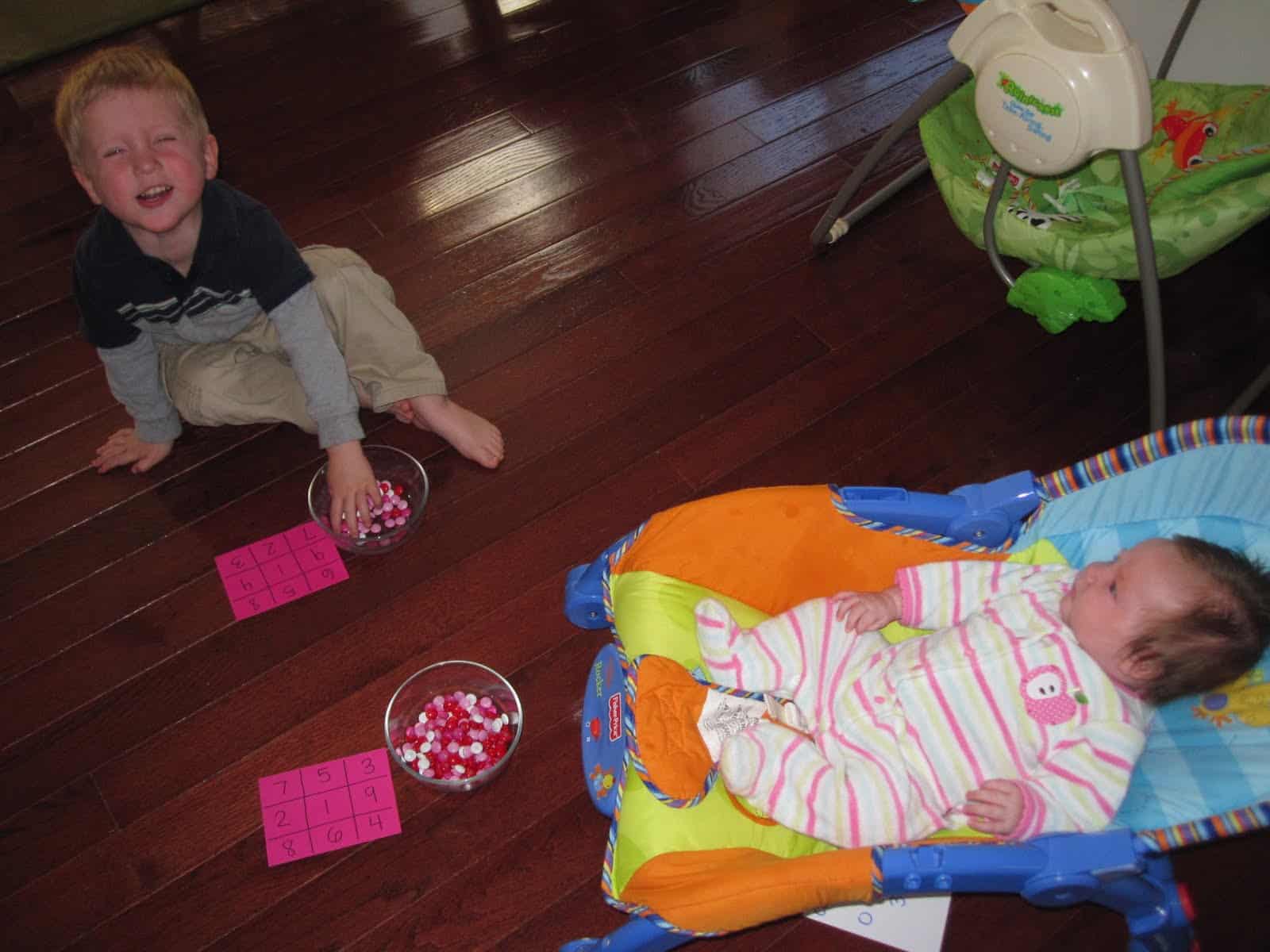 I made little simple number bingo cards with numbers 1-9 on them. I thought he had numbers 1-9 mastered... and this would be a great review game, but today he was getting really confused, so it was good to practice numbers in a fun way.

I made two different cards (one for him, one for me- with the numbers in different spots) and then I cut up small pieces of paper with each number on them. 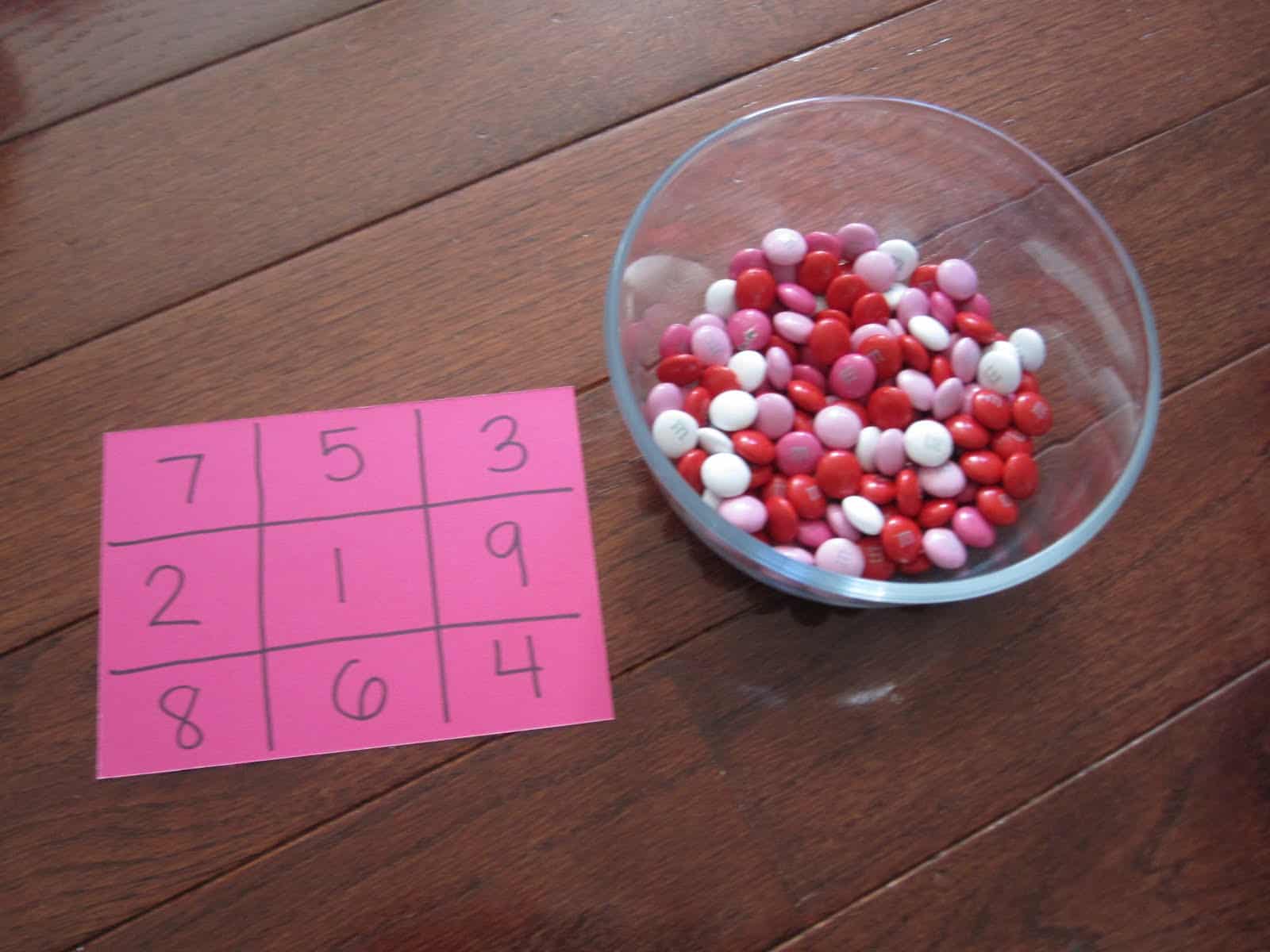 I drew a number from the number pile, showed it to him and he'd tell me which number it was. Then we would both put an M&M on our card on top of that number. We switched after awhile and he drew the numbers and led the game. 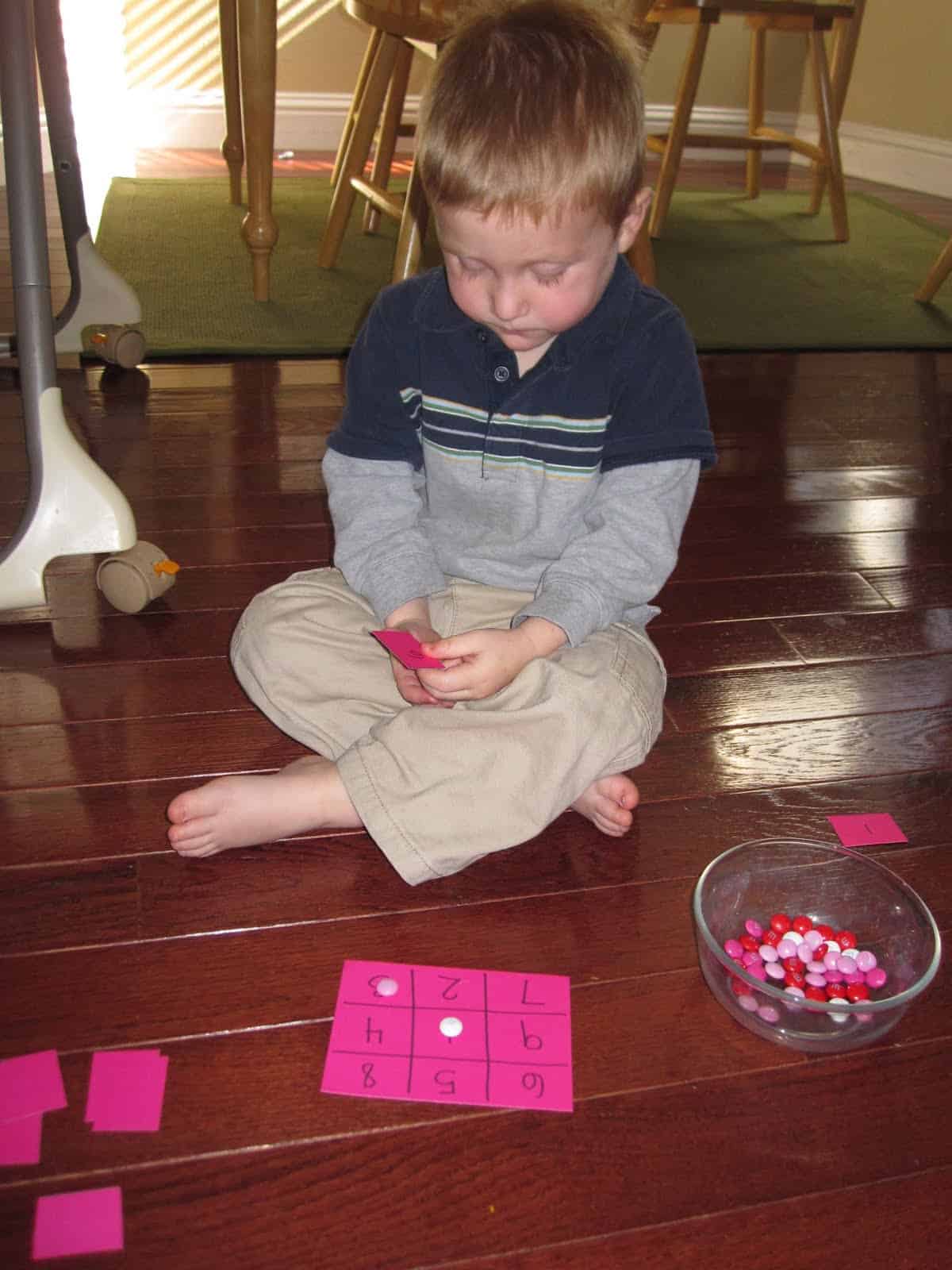 Once we got three in a row (diagonal, horizontal, or vertical) we'd yell BINGO and eat all of our M&Ms... and then start again!

By the time we'd played the game 6 or 7 times he knew all of his numbers again! I think I need to get better at writing numbers though... he thinks my 6 looks like an e... and it kind of does! I would hate to make him confused for the rest of his life!! 😉

On a different note... has anyone tried doing any secret service yet? We worked on it all day... and we were successful one time. The other three times were utter failures! The highlight of the day was attempting to drop off brownies at two friend's houses tonight... secretly. We prepped our little guy all evening that we were going to leave the brownies on the doorstep, ring the doorbell, and RUN! He rang the doorbell and then wouldn't leave (or was so loud walking up to the house that he totally ruined the surprise). Guess we'll have to try again another day!