We had a little toddler Valentine's Day party today, so we made Love Bugs and Marshmallow Hearts.

Both projects were thoroughly enjoyed and lasted longer than 10 minutes (which makes them a success to me :)). The Marshmallow hearts activity was perfect because it was very simple, but allowed for a lot of variation and use of creativity.

Materials Needed: marshmallows (having pink and white would be cool... we only had white), glue, colored pom poms, and hearts cut out of cardstock.

Directions:
1. Put glue along the outside of the heart (or wherever your child wants it).

2. Have your child glue different colored pom poms and marshmallows all around the heart. We also decorated the hearts with a few stickers. 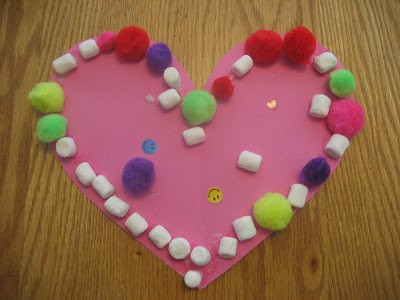 The one rule that I had for the kids was eat as many marshmallows as you want, just DON'T eat the marshmallows that are covered with glue! My little guy tried it once, but never tried it again after that.

Since we were partying we just did this activity purely for fun. No Time For Flashcards did this as a sorting activity, using pink and white marshmallows. We tweaked her idea just a bit because I didn't have time to run to the store and get pink marshmallows. The hearts could also be decorated with markers/crayons before the marshmallows/pom poms are stuck on to make them even more colorful.

If I were going to do this just with my little guy, I might also try to use this as an activity to teach patterns or as a fine motor skills activity (using tongs to pick up the marshmallows and sort them). You could also sort the pom poms by color and size.

This activity gets an A+ for being thoroughly engaging and tasty!

Colors, shapes, and textures could be reviewed during this activity. If your sorting bins are labeled with color words you could also practice helping your child read and match the colored object with the color words. The marshmallows can be squished into a variety of shapes and sizes and they feel very different from the pom poms. Talk about words like squishy, soft, powdery, fuzzy, tickly, and smooth while gluing the objects to the heart.

Thanks No Time For Flashcards for such perfect timing in posting such a fun activity!